Opioid Usage in Philadelphia Leads to Increase in HIV Diagnoses

Anyone familiar with Philadelphia knows Kensington Avenue as an open-air drug market. Tucked under the elevated train tracks in North Philadelphia, business is open, even in the pouring rain on a recent Sunday afternoon. Nearly every drug, including heroin, fentanyl, marijuana, K2, and benzos, can be bought under the dingy underpass, in front of rundown stores and corners piled high with garbage.

Despite the occasional presence of a police car, dealers sold openly, ducking under awnings and in doorways — avoiding the rain, not law enforcement. Users didn’t even bother to go behind closed doors before cooking and injecting their drugs, completely unconcerned with anyone who might be watching.

While the opioid crisis in Philadelphia has been a status quo for years, this endless drug use is causing a new problem: an increase in HIV rates for the first time since the mid-2000s.

“We don’t need another health epidemic. We have enough with addiction,” said Carol Rochuster, founder of Angels in Motion, an advocacy organization that does outreach and policy work for those who use drugs. Seven years ago, her own son was living on Kensington Avenue, trapped in his own addiction. He’s currently in recovery, but the isolation and conditions on Kensington Avenue inspired her to start talking to those on the streets and try to help. Since then, she’s spent almost every day since then working with opioid users, offering counsel and conversation, helping them find spots in treatment centers, and generally doing everything she can to help put a dent in Philadelphia’s opioid epidemic. 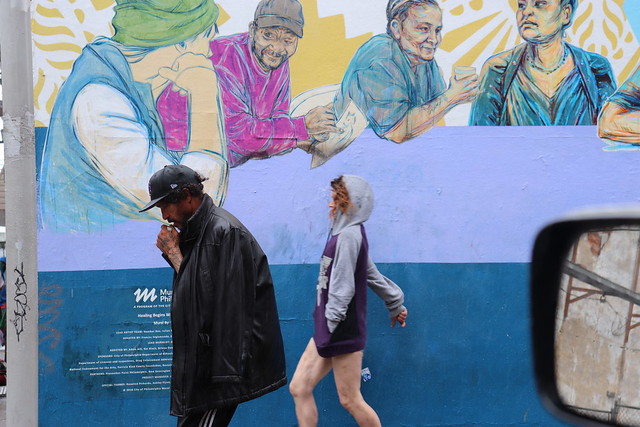 A woman with track marks on her legs runs past another man on Kensington Avenue, Philadelphia. Photo by Kerry Breen.

“Just last week, one of my people said to me ‘I just [tested] positive for HIV.’ It is increasing. It’s just a small percentage, but it is still an increase – it hasn’t increased in years, and now all of a sudden it’s increasing. That could spiral out of control.”

The increases have been small so far, according to James Garrow, Director of Communications at Philadelphia’s Department of Public Health. Diagnoses in the city were decreasing until 2016, when there were 27 diagnoses of HIV among those who use drugs. From 2016 to 2018, the number more than doubled, with 59 new diagnoses among people who inject drugs. The amount may be small, but Garrow describes it as an “outbreak.”

The Trump administration has announced a plan to combat HIV, with the goal of almost completely eliminating the illness by 2030. The plan would target 48 counties where HIV is spread at the highest rate, including Philadelphia, as well as focusing on seven states that have high rates of HIV in rural areas. The plan will have almost 300 million in funding, which is one of the largest increases in HIV funding. However, advocates and experts worry that the plan falls short, and will not reach the people who need it most, including those in Kensington.

“There needs to be a lot more consideration of ‘How do we reach to that set of people that isn’t just able to engage in the healthcare system as easily?’,” said William McColl, the Vice President for

Policy and Advocacy at AIDS United, an organization that works to end AIDS in the United States. “Homelessness is a primary example, but also people who are involved with drug use, that aren’t necessarily seeing [doctors]. I do think they’re going to have their work cut out for them in reaching all of the people that truly need to be reached.”

Garrow is also concerned that President Trump’s other healthcare policies might affect the access that would be necessary for this plan.

“What’s been proposed isn’t really new, and the administration’s assault on the Affordable Care Act (ACA) would probably undercut any gains,” he said. “Health insurance is necessary for many people to get the care that they need to treat HIV infection and prevent the infection from spreading to others.” 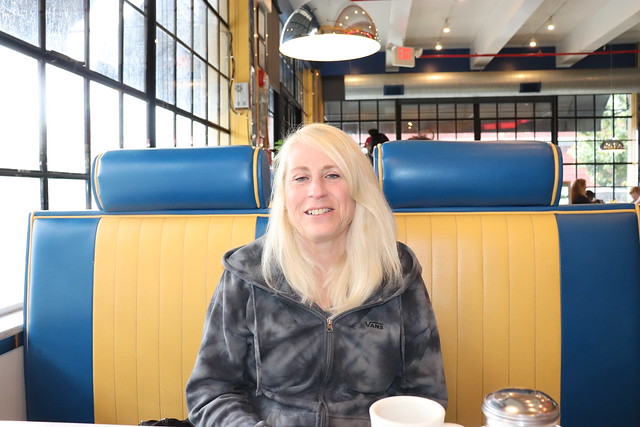 Carol Rochuster, founder of Angels in Motion, an advocacy organization that does outreach and policy work for those who use drugs, sits in the Fishtown Diner. Photo by Kerry Breen.

There’s also a focus on clean equipment, even among the trash-ridden streets of Kensington. Groups like Rochuster’s Angels in Motion do their best to provide not just clean needles and cookers, but also information on why using it is important.

“If you don’t keep people alive, they can’t make it to recovery,” said Rochuster, whose organization has begun doing mobile needle exchanges to reach as much of the city as possible. “HIV has increased in the city, and the access to needles hasn’t. They’re still in one location, but South Philly needs it, Northeast Philly needs it, Southwest — they all need access to free needles. You need clean needles. And not just needles – supplies, cookers, you need everything.”

Beyond these efforts, Philadelphia is already doing many of the things the administration’s plan outlines, including funding programs and outreach efforts.

“We are expanding syringe exchanges, working to increase access to PrEP, and working to link people who inject drugs to medical car to ensure viral suppression,” said Garrow. Rochuster says that in her own advocacy, she focuses on making sure that the people she talks to know how important HIV medications can be.

Even with the efforts of health departments and harm reductionists, Kensington seems as stricken as ever. Dealers huddle under the awnings of drug stores and takeout Chinese restaurants; an encampment filled with users sits directly across from a mobile unit run by Prevention Point, another organization that does outreach with opioid users. A police car with its sirens off drives across the intersection, not even acknowledging the open sale and use of drugs. 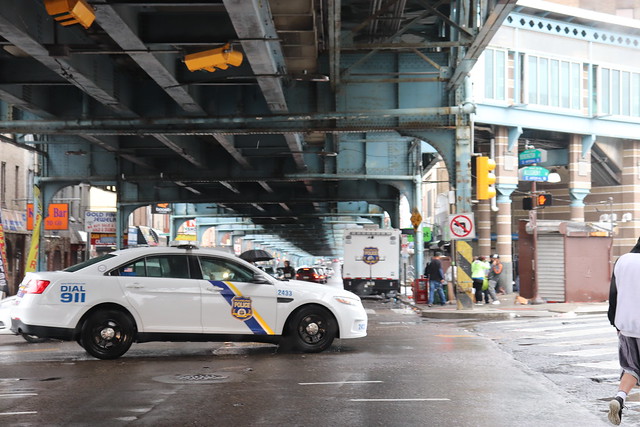 Despite the police presence, crime rates in Kensington are high, and drug sales and use continue with little enforcement. Photo by Kerry Breen.

However, to Rostucher, the solution is not to abandon areas that seem hopeless, but to keep trying, to break through the barriers of stigma and isolation that surround such neighborhoods.

“I started this because of my son. I would go down to find him. I just wanted him to know I loved him. While going down and looking for him, I saw so many lost individuals, so many lost souls,” she said. “And then I realized that the isolation is just feeding this disease. The more I went down, the more I could see — the isolation just took people down deeper into their addiction, and they were so alone, and they just keep going deeper.”