Oysters disappearing on the Chesapeake 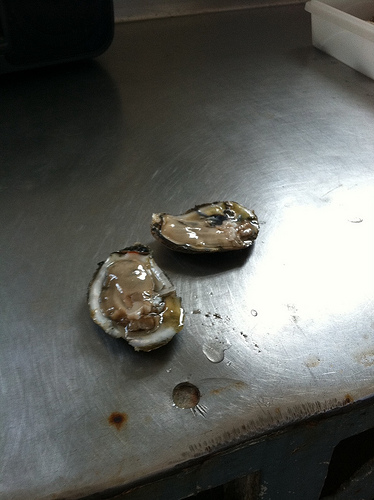 Captain Wade Murphy can’t afford to pay a crew a decent wage anymore so he does his oyster dredging alone.

When the season kicks off on October 1, the leathery skinned 64-year-old will cruise onto the waters where the Choptank River opens into the Chesapeake Bay. He’ll hoist the sail, drop a net attached to a heavy metal rake and trawl the beds to see what he can catch. He used to fill many bushels per hour but in the past couple of decades, the number of shells he hauls onto the low-slung deck of his boat has been consistently disappointing.

“My father and his father made a decent living dredging the bay,” Murphy said on a recent voyage on the Rebecca T. Ruarke, the 19th century skipjack he bought in 1984. “I wish my boys could do the same, but they can’t.”

Decades ago oysters were plentiful in these parts, and provided a solid livelihood for hundreds of watermen. But a barrage of threats has decreased the population so severely, it has threatened parts of the area’s economic stability. 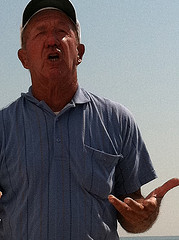 Murphy attributes the steep decline of oysters to a toxic cocktail of mismanaged policies on issues of overfishing and overdevelopment. But his newest concern is a possible move by the State of Maryland to allow motorboat dredging—since the middle of the 1800’s, rakes could only move as fast as the wind filled the sails of the ships that drag them.

The concern is that too many watermen would take advantage of the motorized option and after a few seasons of plenty, would deplete the oyster supply.

“They want to run the population down and put the oystermen out of business so they can finally lease out the bay,” he said.

If big oyster farming companies wrestle control of the waters of the Chesapeake from the individual watermen who have been scouring the bay for generations, Murphy thinks, it would be a disaster.

But not all fisherman agree. Levin “Buddy” Harrison Jr. has a different take. He said turning the bay waters over to larger businesses would go a long way to repopulating the oyster beds.

“Things will get a little better,” he said matter-of-factly.

The Harrison family has owned a seafood restaurant in the area since 1899 and an oyster shucking operation since the 1960’s. The business thrives when oysters are plentiful.

“It used to be, we had refrigerated trucks full of shells waiting to be shucked at all times,” said Levin “Buddy” Harrison Sr.

When a new load of oysters came in, the contents of one of the containers would be sent onto the stainless steel tables of the shuck house creating a seemingly endless loop of shell opening. Supply was so robust, shifts would run almost around the clock.

Now the Harrisons are more worried about keeping their small stable of shuckers busy enough to retain them.

Currently, 20 percent of the bay is leased out to large farming companies.

This is something most oystermen, including Murphy, didn’t see coming. “I never thought I would see the day, he said. “My dad thought it would never happen. But here we are. ”

As he talked about the possible change in policy, and the potential effects on his business and his family’s legacy he pounded his fist on the top of the boat’s small cabin.

But Harrison Jr. looks forward to passing on his watery heritage to at least one more generation. When his eldest son, Beau, graduates from college next year, he will begin formal training to take over the mini oyster empire that took root over a century ago.

He’s hoping the state’s leasing proposal will provide a steady stream of oysters for Beau to shuck well into the future.