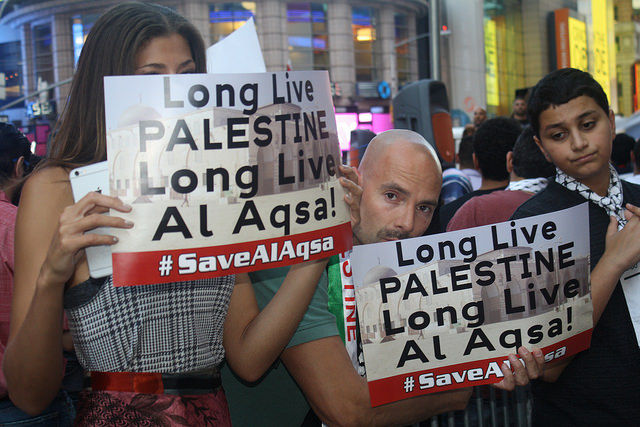 Protestors at the demonstration in Times Square hold up signs expressing their loyalty to Palestine and the Al Aqsa Mosque. Photo by Wyatt Salsbury

As the sun began to set over the Manhattan skyline yesterday, and the day began to turn to night, the action off 42nd and Broadway was just getting started. The sounds of car horns, peddlers selling goods and advertisements on the jumbo screens were met with a different sound. It was the sound of a group of people, united by a single cause that filled the nearby street corners with observers, listeners and chanters.

It was a demonstration over the conflict at the Al-Aqsa Mosque in Jerusalem, between Israel and Palestinians. A crowd gathered on the nearby streets to listen to the words, chants and thoughts of those in support of the Palestinians The mosque has been at the heart of a lot of unrest because it is an 8th century holy site, revered by both Jews and Muslims. For Jews it is known as the Temple Mount, where Abraham offered his son as a sacrifice and the location of two revered Jewish temples. But Jews have not been allowed to pray there. The mosque is considered the third holiest site in Islam and now there is fear that the rules will soon change because conservatives have been pushing for more access to the site. Recently Israeli police raided the mosque in what they called a security operation.

Diab Mustafa, 47, President of the Palestinian American Community Center, said Israeli forces entered the Al-Aqsa Mosque and attacked Palestinians using a wide array of tactics including, bombs, bullets and even tear gas canisters. In the process of these attacks, damage was done to the mosque itself. 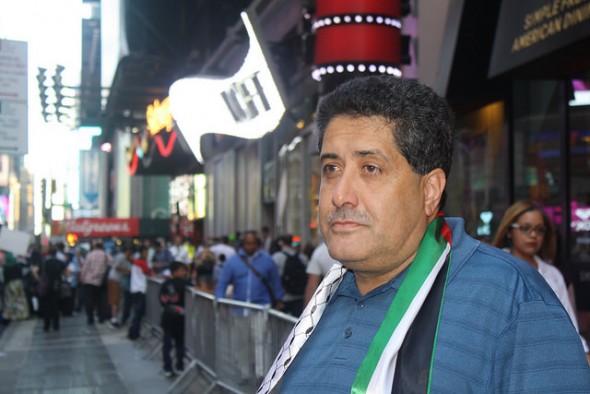 Diab Mustafa, President of the Palestinian American Community Center, stands at the back of the demonstration, wearing a Palestinian flag. Photo by Wyatt Salsbury

“The Palestinians and the Muslims and all freedom loving people are here to demonstrate against what Israel is doing to the Al-Aqsa Mosque in Palestine,” said Mustafa. “Basically, we as Muslims, as Palestinians, are protesting today for the message of Aqsa, for the safety of the message of Aqsa, and for keeping the Israeli settlers and Israeli army from entering and desecrating the Al-Aqsa Mosque.”

But the pull to the site is strong for the Jewish people.

“This is a holy site,” said Eli Akbar, 78, a Muslim originally from Guyana, South America, who attended the demonstration. “This is where Christ was crucified… and the prophet of Islam ascended in air to the heavens to receive God’s final commandments to mankind.”

“They lock up the Muslims,” he said. “They find an excuse to use brute force and for a small demonstration…they shoot to kill.”

About 200 people attended the Times Square demonstration, which was part of a two day effort.

For many, the demonstrators was a human rights issue.