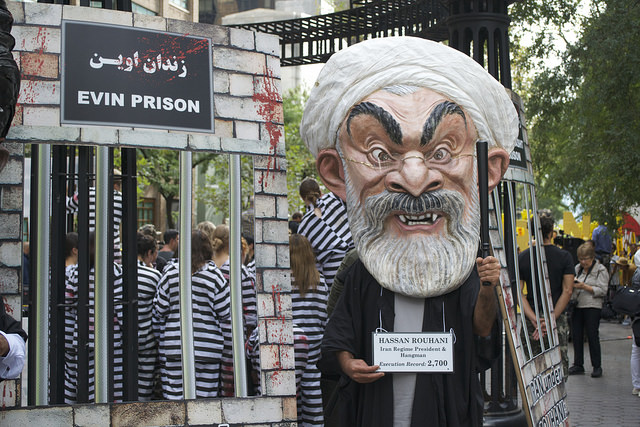 A protester wears a mask representing Iranian President Hassan Rouhani during the protest outside the United Nations headquarters. Photo by Lisa Setyon

Thirty years ago, Saïd Rabie escaped the radical Islamist government of Iran. But he lost his sister, brother and many close friends he left behind. He said he is angry and can’t heal, haunted by their deaths and the sufferings his family and country has had to endure.

“In October 2009, my sister was in a camp, they shot 80 missiles to the camp, she and 23 of my friends got killed,” said Rabie, 47, of Las Vegas, Nevada. “Then my brother was put in jail for four years and then killed and my dad had a heart attack because of the torture and the pressure on all of these people.”

Yesterday morning thousands of people including Rabie, gathered on the Dag Hammerskjold Plaza across the street from the United Nations, to express their outrage with Iranian president Hassan Rouhani, who was speaking at the United Nations. 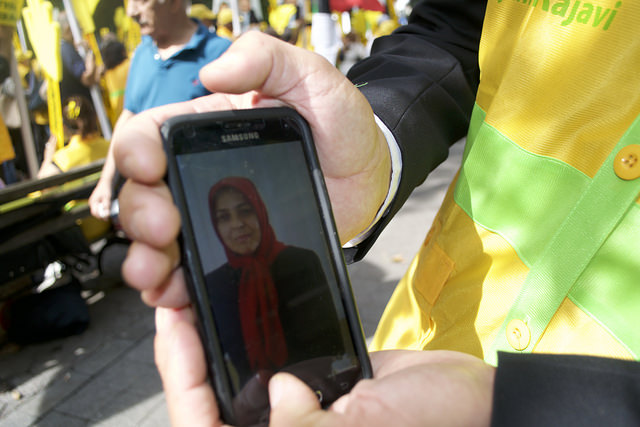 Said Rabie’s sister, Nayere Rabie, died in a camp in Iran in October 2009. According to Rabie, she and 23 of his friends died because they represented a threat to the government. “They were a bunch of educated people who didn’t want to follow his definition of what democracy should be,” he said. Photo by Lisa Setyon

Rouhani, who is up for reelection, wants to stop the United States from blocking their bank transactions, which prevents Iran from doing financial transactions with other countries. He needs the UN to put pressure on the Obama administration. Since the United States and Iran do not have diplomatic relations,

Rouhani also signed the controversial nuclear deal with Iraq, that has fueled his enemies desire to remove him from office.

But the thousands of protesters did not want Rouhani, who they see as a ruthless dictator, to address the UN General Assembly.

“He shouldn’t be allowed in the UN,” said, Armahd Babaie, 58, of San Francisco, California. “He is the representative of a government, that has been sponsoring terrorism. I started my life here in 1976, I raised my family here. but I have always been a supporter of the resistance. So I am here today to make sure that everybody gets freedom, that the world comes together and fights against terrorism. They are the DNA of ISIS.”

The protest, which was organized by the Organization of Iranian American Communities, had protestors from all over the world, who traveled to New York City in order to denounce the lack of human rights under President Rouhani. With a population of more than 77 million, Iran still has one of the highest rate of executions in the world along with Saudi Arabia and China.

“They got killed because they don’t want to follow the government,” Rabie said. “Christians for example, they are going to force them to become Muslims or they will be captured and put in jail.” 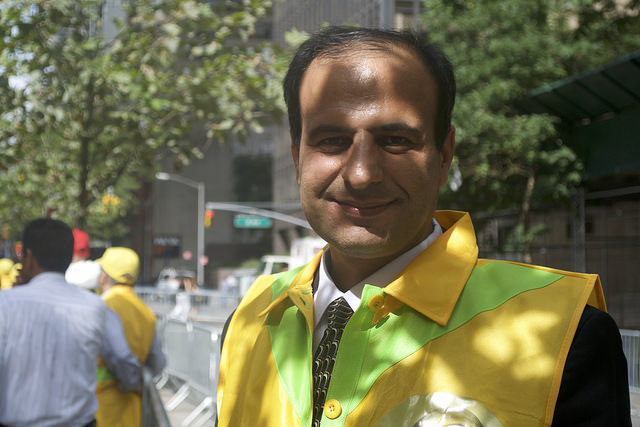 Said Rabie escaped from Iran and emigrated to the United States 30 years ago. While he has managed to escape the radical Islamist government of Iran, his sister, his brother, his father and 23 of his friends were killed by Rouhani’s government. Photo By Lisa Setyon

This was the case of Saeed Abedini, an Iranian American Christian pastor who was put in jail in 2012 because of his faith.

“When I was in Rajaeeshar prison, every Wednesday, at 3 a.m., they took people for executions,” Abedini said to the protestors. “Last month, thousands got executed and killed for nothing, so we are here for the people that don’t have any voice.”

Halfway through the protest, a performance embodying the mass execution of thousands of political prisoners in Iran was performed. It was followed by a speech by Sir Geoffrey Robertson, President of the United Nations Court for War Crimes in Sierra Leone. 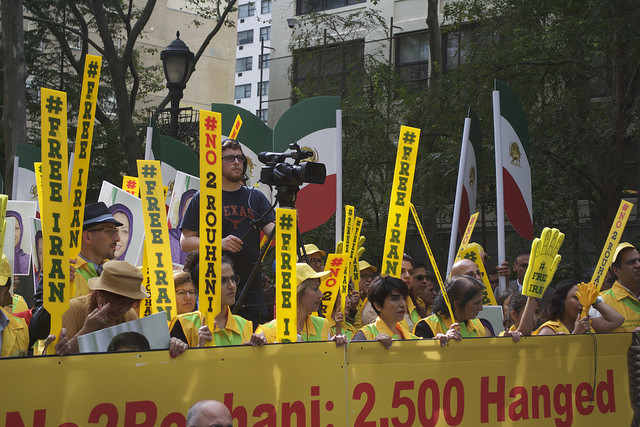 Thousands of protesters gathered at the Dag Hammarskjold Plaza, across the street from the United Nations, to express their anger with President Hassan Rouhani’s government and the United Nations inviting him. Photo by Lisa Setyon

The protesters wore leather jackets in honor of the victims and chanted “No to Rouhani, Yes to Human Rights.”

“I moved to America in 1977 right before the revolution,” Nada Nazabi, of Flint, Michigan said. “Look at my country now, look what’s going on in all Arab countries, look what’s going on with Saudi Arabia. Iran is the main problem all over the Middle East, that’s why we want him gone, we want the regime to change in Iran.”

Sheirill Fliley, 66, of Flint, Michigan was among the passionate participants. For Fliley, it was essential to look at her own journey to reach freedom.

“All my life, I fought for freedom” Fliley said. “As an African American in the South, growing up with a lot of prejudice, with a family working in the cotton fields and not being able to go to school until I was 14, we had to fight to make our voices heard. So I am here because I believe in freedom.” 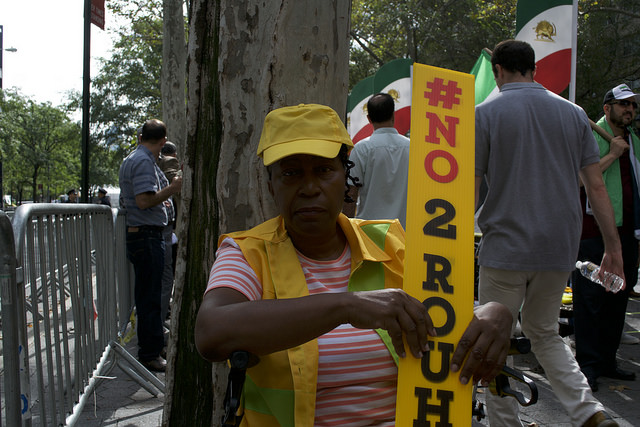 It is the third time that Fliley attends the rally. She said she is a “firm believer of freedom” Fliley wanted to support the oppressed population of Iran. Photo by Lisa Setyon

According to the United States Department of State, the Iranian regime is still seen as the world’s leading state-sponsor of terrorism and the main cause of carnage in Syria, which has recently been described as the stepping stone for extremist violence.

Amnesty International has reported that  the Iranian government does not allow freedom of expression and anyone who advocates for human rights can be imprisoned, not given a fair trial, tortured and even killed.

For these reasons, many protesters remained unclear as to why the United Nations invited Rouhani to speak.

“If you know that his government supports terrorism, why do you invite them to come here?” Rabie said. “What is the policy of the United States? Sit with the terrorists and negotiate with them? I am shocked when I see that they are releasing billions of dollars for the nuclear deal. You think they would give the money to Iranian people? No. Iranian people, they get poorer and poorer every day.”