“There’s something special about when the community has empowerment to make change,” said Chantay Love, the Director of the nonprofit Every Murder is Real (EMIR). “But they have to be able to have the resources to make that happen.”

EMIR received a $760,000 grant as part of the program, which will enable them to expand their trauma-informed services to more of those devastated in the wake of gun violence. ‘EMIR’ has a double meaning as an acronym; it’s also meant to honor Love’s brother, Emir Greene, who was lost to gun violence on March 26, 1997 at just 20 years old.

“There’s a hierarchy of homicide,” said Love, who said her family had extensive difficulty finding support services of all kinds after Emir’s murder. “That made us decide that everybody should be served. The people that are left behind are collateral damage, and they should not be judged based on what might have occurred.”

According to Love, the number of individuals EMIR served during the pandemic inflated by 200%, a dramatic surge correlated with the rise in gun violence over the same period of time in Philadelphia and across the country.

“This is a moral thing,” said Love.  “Leaders on the ground should be funded to do this type of work, because most of the time, they’re doing it out of their heart and passion. They’re not going to leave, no matter who’s elected or running for office.”

Philadelphia has been criticized for not treating the gun violence epidemic with the urgency community members believe is necessary. Though 2021’s city budget dedicates the most money on record to address gun violence, only $68 million represents new spending. 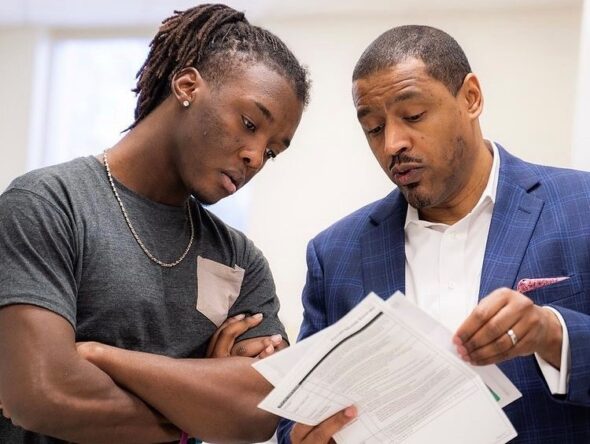 Atif Bostic, another Philadelphia native, is the Executive Director of Uplift Workforce Solutions, which received a $150,000 grant. The nonprofit supports formerly incarcerated juveniles in their reintegration process by developing skills that make them attractive candidates and help them remain employed once a job is secured.

He believes that focusing solely on job placement would set the young people they serve up for failure.

“We look at the root causes of why people go into crime and why those who are incarcerated recidivate, and try to drill down on those areas,” said Bostic. “Because a lot of times, this population is relegated to neighborhoods that are under resourced, low access, and are over policed.”

“We’re aiming for sustainability, and the first part of that is creating stability,” said Bostic. “And once we connect them to their future selves, we’re able to move them away from their past behavior.”

The $22 million earmarked for nonprofits combating gun violence specifically represents a dramatic increase in direct aid from previous initiatives, like the $700,000 in grants awarded by the city in 2019.

Philadelphia hopes to award the remaining grants by mid-November, with a total of 212 nonprofits in contention for capacity-altering funding. Additional first round grant recipients include: