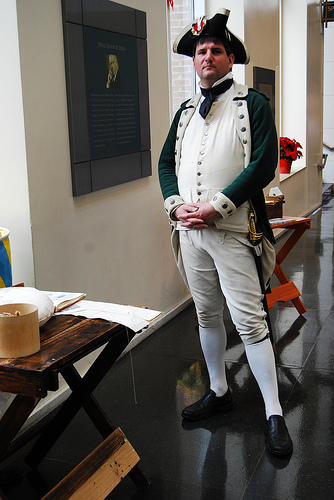 “Major” Samuel Nicholas of the Continental Army poses for a photo at the Independence Visitor Center in Philadelphia. Nicholas, a historical impersonator working for Historic Philadelphia, is one of the tens of thousands of employees in the multi-billion dollar tourism industry in Philadelphia, a city that might be dead without visitor spending. (Pavement Pieces/Kwanwoo Jun)

PHILADELPHIA – “Major” Samuel Nicholas posed for a photo at a tourist’s request. In a green tailcoat and under a black cocked hat, he made a pompous look as if he were a real Continental Army officer. The shutter clicked, and he resumed his position, strolling back and forth on the hallway of a visitor’s center.

A historical impersonator, Nicholas’ job is to interact with tourists and help them feel a real sense of U.S. history. On any given day, he might chat with tourists, pose for pictures, give directions or answer questions about the American Revolutionary War.

Nicholas, 37, works at the Independence Visitor Center, a 21st-Century modern building in Center City, although he “lives” in the 18th century. And while Nicholas himself is a single man from Mansfield, Pa., his historical alter ego talks about his “lovely wife Mary Jenkins Nicholas” and their “five children.”

Whenever Nicholas cracked a joke, visitors burst into laughter — a response he says he always loves.

“My presence makes their experience come alive,” he said.

Nicholas, who has worked for Historic Philadelphia for 15 years, is one of the tens of thousands of employees in the multi-billion dollar tourism industry in Philadelphia, a city that would lose its vitality without funds tourism generates.

Tourism in Philadelphia was a bigger employer than transportation, insurance, food stores and banking in the region last year, sustaining 83,664 jobs, or 5 percent of the total employment, the data showed.

“If the tourism industry drops away, it will be a very sad and unfortunate thing to Philadelphia,” Nicholas said.

While tourism is still a major industry in Philadelphia, recent numbers indicate Philadelphia’s tourism industry is being affected by the economic slowdown. GPTMC data show 36 million domestic travelers visited Philadelphia in 2009, down 1.9 percent from 2008, with visitor spending plunging 13.2 percent year-on-year.

“Philadelphia’s drop in tourism in 2009 was in line with national and global trends — the great recession caused a pullback in overall travel activity,” Ross said. “2010 has been a stronger year – people with the means are ready to travel again.”

Philadelphia Economic Index shows the city’s economy declining again since 2007 after years of slow recovery, with factories continuing to close. The city knows tourism can be a real economic and job booster. Philadelphia, the birthplace of American independence and democracy, has more cultural and historical relics than any other U.S. city – a great boon to tourism.

The city is home to the most historic mile in America. It is home to the Liberty Bell, Independence Hall and Benjamin Franklin’s Grave among many other sites.

Randy Garrison, 56, a tourist traveling from Dayton, Ohio, who was traveling with his wife, said he hoped to bring his children to visit Philadelphia. “They need to see the heritage and the history of the country,” Garrison said.

Tourists look around the Liberty Bell, one of the most iconic U.S. historical relics, at the Liberty Bell Center in Philadelphia. The bell, once hung at the Pennsylvania State House where America’s independence was declared in 1776, and attracts 13,000 visitors a day in season. (NYU/Kwanwoo Jun)

Philadelphia has actually launched an aggressive and smart campaign to attract tourists for more than 10 years.
This year, GPTMC, a main tourism promoter for Philadelphia since 1997, has decided its successful “With Love, Philadelphia XOXO” campaign, which started a year ago.

Campaign posters and banners use no complex pictorial images. Instead, they use the friendly Post-it designs that carry only the slogan written simple in black and red. It aims to put Philadelphia on everybody’s list as a place to go.
The ads rely on various platforms like outdoor banners, TV, online, print, radio and in-theater commercials. They often target tourists in other major U.S. tourist cities, promoting the mindset of “I’ve been to New York and Washington. Let’s do Philadelphia this time.”

In June, Philadelphia became the world’s first city to showcase its tourist attractions via a mobile application to demonstrate how much it values tourism.

The Find Your Philly mobile application features five tours, or “treks,” focusing on the city’s history; arts and culture; science and multicultural aspects; as well as the expanded convention center, due to reopen in March 2011.
Convention business is another part that Philadelphia focuses on to boost international visitation. The ongoing $786-million expansion of the convention center would make it possible to host two major conventions simultaneously.
In September, SugarHouse Casino opened its doors on the Delaware River waterfront. The city quickly connected SugarHouse to the public transit system in a smart bid to get tourists off the streets and into the casino.

One of the tourism marketing successes in Philadelphia was the creation of a thriving business enclave in what was the brothel district.

The “Gayborhood” area has turned into a bustling spot for trendy restaurants, cafes, bars, clothing stores and souvenir shops since it adopted its new name.

GPTMC and other tourism agencies and sponsors have constantly supplied the district with things to enjoy and maintain vitality. In June, a three-week summer event featured a gay film festival, a photo exhibition and a block party.

“Before it was the ‘Gayborhood,’ it was a red-light district,” said Nelson Hernandez, 23, who works at an area cafe. “Once it’s substantiated, the local community that cultural backgrounds have been in legitimizes the area here.”

He said many restaurants, shops and cafes in the neighborhood are owned by the gay, lesbian, bisexual and transgender people. The shops carry “rainbow” stickers to demonstrate acceptance of all people, gay or straight.

A few blocks away from the “Gayborhood,” Nicholas was still having fun with tourists at the Independence Visitor Center. Nicholas was demonstrating some of his 18th-century antique items – including an army sword, a bugle, a stylus pen and sheets of ivory for taking notes – to tourists. His friend “Trooper” Robert Hare joined him, spinning an old wood top on the hallway. 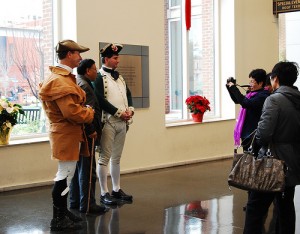 “Major” Samuel Nicholas (center) of the Continental Army and “Trooper” Robert Hare (far left) of the Philadelphia Light Horse Troop pose for pictures at the request of tourists at the Independence Visitor Center in Philadelphia, (Pavement Pieces/Kwanwoo Jun)

Hare, 37, an employee of Historic Philadelphia, was impersonating a member of the Philadelphia Light Horse Troop who escorted General George Washington, commander of the Continental Army. He wore an 18th-century hunting frock made of orange-colored thick cloth, a common garb won by American volunteer troopers.

“If you find something that you love, you’ll never work a day in your life. -Benjamin Franklin,” Hare said.

On his antique desk, Nicholas placed a note for visitors: “Questions answered with sarcasm and wit. You have been warned.”

He said his note was aimed at drawing more attention from visitors than his colleague’s note “Questions cheerfully answered.”