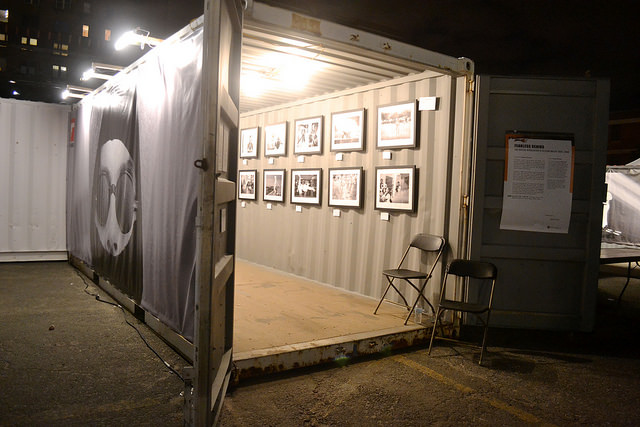 A shipping container exhibit at Photoville, a photo exhibition in Brooklyn. Photo by Christina Dun

Lined up along the Brooklyn Bridge Park waterfront more than 60 storage containers were scattered like giant Lego pieces begging to be stacked. From the outside, they looked like your typical large-scale metal shipping boxes, but they were far from hollow. Inside of them was a photo festival called Photoville, a one-of-a-kind photography festival that uses repurposed transport containers to house installations, exhibits and seminars, showcasing a wide range of artists.

It opened up to the public yesterday and will run for 11 days. Inside—and surrounding— the 60-plus containers are works by more than 400 photographers.

“Weirdly enough, shipping containers make for a really good and concise photo venue,“ said Daniel Ehrenworth, 36, who was in town from Toronto and stopped by to check it out. .

Photoville is the brainchild of United Photo Industries, which was founded in 2011 by Sam Barzilay, Dave Shelley and Laura Roumanos. This year, they partnered with Smorgasburg and Brooklyn Brewery for a village Beer Garden, along with Narratively for a packed itinerary of visual storytelling events, truly hosting a creative-people’s paradise. 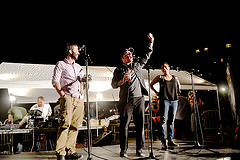 “It was a really lovely event,” said Ehrenworth. “As opposed to being in booths, the shipping containers were like a whole bunch of small galleries that really held the work very nicely. That’s what I’m going to remember the most.”

The concept of Photoville is unique in the sense that they think outside of the box by taking viewers right back in. The containers burst with life, with top-notch quality images ranging anywhere from intricate portraits to exquisite landscapes.

“We wanted to provide a platform for artists to show their work and get noticed,” said Roumanos. “And hopefully conversations will start.”

Photoville itself began as a small project and has gained attention worldwide. It has now grown to be the largest photographic event in New York City. Photoville kicked off with an opening night celebration featuring the screening of a collection of Brooklyn-based photographs. “We Live In Brooklyn, Baby” was curated by New York-based photographer Jamel Shabazz. 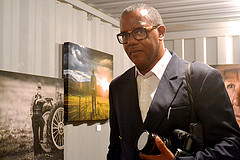 The original compilation was viewed earlier this year in Poland at Lodz Photofestivval, but yesterday marked the debut of its extended version on home soil.

Shabazz, 54, has been documenting the streets and characters of Brooklyn since 1975. He worked with the Photoville team to bring together some of the city’s most talented photographers, both established and up-and-coming.

“I immediately took on the challenge,” Shabazz said. “It gave me the opportunity to bring artists together and perhaps show the old Brooklyn, and even show the changes inside Brooklyn.And give people a better understanding of this wonderful borough.”

The showcase included more than 40 local photographers and the images flashed onscreen one after the other to a soundtrack of Brooklyn-inspired tracks, spun live by local DJs Chris Devlin and Prince Klassen.

“We wanted to include the whole of Brooklyn to the best of our ability and we didn’t want to leave anybody out,” said Shabazz. “We started at the Brooklyn Bridge and just tried to document all the communities that we could. And surprisingly, everyone answered the call.”

For Shabazz, Brooklyn has changed a lot over the years and it’s important to acknowledge it.

“The urban landscape has changed drastically, to the point where I don’t even know the Brooklyn I once knew,” he said. “There are so many new buildings being produced constantly and I get lost in this city, where I never used to get lost.”

“We Live In Brooklyn, Baby” was just the beginning. Last year, Photoville brought out 58,000 visitors and an even higher volume is expected this year.

“It’s all about communities coming together and that’s exactly what Photoville is,” said Roumanos.