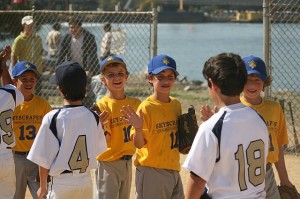 Little leaguers of the Manhattan Youth Baseball League congratulate each other after a game. (manhattanyouthbaseball.com)

As baseball tries to put behind the final remnants of the steroid era that put a black eye on the entire sport, it seems the game considered our nation’s pastime is encountering an entirely new issue. A different epidemic appears to be making a wave through baseball, as an increasing number of pitchers have been forced to undergo major surgery each year. While these procedures most commonly occur at the highest tiers of play, experts believe that they can be prevented starting at the lowest levels.

“What are we going to do to protect our sons,” asked Bobby Hoffman, commissioner of the Manhattan Youth Baseball League. Hoffman, 61, began the little league he still oversees in 1990, and his answer was for the Upper East Side based league to stress education and fundamentals.

Hoffman believes that the first step a pitcher needs to take to avoid injury is learning how to throw properly. Pitching is all about repeating the same delivery on a consistent basis, and if that delivery is flawed, eventually those harmful mechanics will catch up to an athlete later on in his career. Hoffman has never had a pitcher in his league go under the knife, and he credits that distinction to the clinics run by former college and professional baseball players before each game. Although, not only do the former players advise the young athletes, but they instruct parents on how to properly teach their children as well.

“The premise of the league was to teach baseball and to not just throw kids out to the wolves,” said Hoffmann, who has an 8-year-old son who plays in the league. “So we started with programs on how to teach dads how to teach proper fundamentals… and then we would also teach during the game.”

While proper pitching mechanics is one way a player can greatly reduce the risk of injury, monitoring pitch counts is another approach Hoffman suggests managers can use to keep an eye on their players.

Using information from a study completed by Dr. Stephen Fealy for Major League Baseball, Hoffman prefers if pitchers in his league do not throw over 60 pitches in a game. It is at that point that fatigue sets in; tired ligaments are overworked, causing pitchers to use potentially harmful mechanics. While the league does not implement a hard rule on the matter, Hoffman makes sure the teams’ coaches are fully aware of his goal.

“I tell my managers, look a 15-year-old breaks down at 60 pitches, you know when your kid’s mechanics are breaking down, do the right thing pull them out of the game,” said Hoffman. “Our parents are our managers, they’re expected to protect their sons as well as the other sons in their care.”

Managers can exercise caution to the best of their abilities, but once their players leave after a game or practice, they can no longer supervise them. Whether it is for select teams or college scholarships youth sports breeds competition, and as a result kids are playing on multiple teams, and playing baseball all year round. Joe King manages an 11 and under travel baseball team out of Levittown, Long Island, and believes overexposure is one of the main reasons for the increase in injuries to pitchers.

“Our league enforces a 60 pitch limit, but it serves no purpose if that child pitched the day before for a team in another league, or even worse earlier that day,” said King, who has coached baseball for 10 years. “My son pitches on the team I coach, but I only allow him to throw once a week.”

King’s son Joseph has been playing baseball for five years and when he is not pitching he plays shortstop and third base. Baseball is primarily the only sport Joseph plays, but the 11-year-old limits his season to the spring and summer. He hasn’t had a history of serious arm injuries, but in a game earlier this month he felt a pain in his throwing arm and was immediately moved from pitcher to second base. Joseph was hesitant about getting back on the mound, although he does have another qualm with the sport he loves to play.

“Last year I used to always get hit in the leg when I was batting,” said Joseph, who bats left handed. “I still played, but it just kept happening to me, so I hope that stops.”

Assuming his luck in the batters box changes, limiting Joseph’s workload and using proper form will help him follow in his father’s footsteps (King is 46-years-old and still plays baseball), but the same cannot be said for other young athletes around the country.

Dr. David Dines, world-renowned shoulder surgeon at the Hospital for Special Surgery in New York, agrees that overuse is one of the main reasons why pitchers damage their throwing arms, and believes it occurs far too often nationwide. Although, that’s not his only rationale for the uptick in injuries, as Dines, who is currently the medical doctor for the Association of Tennis Professionals (ATP Tour) and previously was the associate team physician for the New York Mets, also feels that across the board the level of play has risen, and pitchers have been the ones paying the price. It is harder than ever to retire batters, and the adjustments pitchers have been forced to make have proven costly.

“Why is there a rash of elbow injuries in the Major Leagues? Because quite frankly these hitters are so good,” said Dr. Dines, the former president of the American Shoulder and Elbow Society. “These guys have to throw harder, they have to throw with more velocity, with more action on their pitches… and all these things have an affect of putting pressure on either your shoulder or your elbow.”

While it is unclear whether throwing harder makes a pitcher more susceptible to a serious arm injury, studies have proven that pitchers that throw faster do tend to spend more time on the disabled list and out of action. One element Dr. Dines is certain about is that an athlete’s overall fitness does factor in to his chances of getting hurt. Just as pitching requires a lot moving parts to work as one, it is not just a pitcher’s arm and shoulder that needs to be strong, but his core and lower body as well.

“We used to think that it was all arm, elbow, hand and wrist. And over the last 15 to 20 years we now know that in throwing it is the core, literally the core, the spine, it’s all attached,” said Dr. Dines. “At the end it is the concept of rehabilitating, strengthening the core to the shoulder to prevent injury.”

Despite pitchers going down at an unprecedented level, it is not inevitable that most pitchers will at some point be forced to undergo major surgery. Guidelines towards pitcher safety have been and will continue to be administered and improved upon. While the specifics of those policies may change, the same themes continue to be emphasized.

“Stuff happens, a guy falls off the mind, on one pitch a spike gets caught, you can’t prevent that, that’s just bad luck,” said Dr. Dines. “But in general, if you take the approach that you are going to be prudent about the amount of throwing, you’re going to have the proper education and training about the proper throwing mechanism and you are going to take care of your body the way it needs to be taken care of, you can prevent a lot of these injuries.”