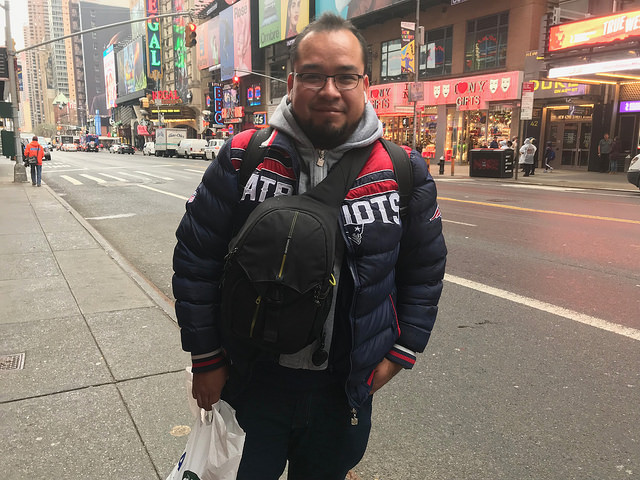 After starting the season 1-7, and losing to their divisional rival Philadelphia Eagles, fans of the New York Giants are becoming uneasy about the current state of their favorite team.

“They don’t have a winning mindset” said Daniel Medina of Mexico City. “They shouldn’t be afraid of going against any team.”

Losing seven out of the first eight games of the season ends all playoff hopes for the franchise that hasn’t won a playoff game since 2011. Even with the star power of wide receiver Odell Beckham Jr and first round draft pick, running back Saquon Barkley, the Giants still can’t find ways to win in crucial games.

The Giants looked strong heading into the second half with a 19-11 lead. Their offense, which has struggled this season could not manage to score a touchdown and failed to convert on meaningful third downs in the second half to keep drives alive. Many of the offensive struggles has been pointed to quarterback Eli Manning, who is in his 14th season and won two Superbowls with the Giants.

“He’s trash, he’s old and he’s not winning us games” said Angel Cruz of the Lower East Side. “We should let him (Eli) go and let Saquon and Odell be the face of the team.” 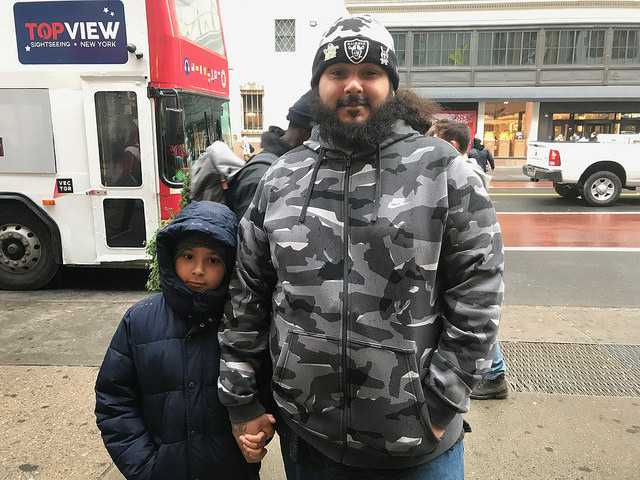 Angel Cruz of the Lower East Side and his son are loyal New York Giants fans. They hope their team can find a way and finish the season strong. Photo by Chinedu Onyemaobi

Playing to their strength, Manning threw the ball 37 times and targeted receiver Odell Beckham Jr nine times. Beckham Jr, who is the active leader in yards per reception, caught five of the nine targets for 85 yards, but failed to reach the end zone, something he hasn’t done much this season. The Philadelphia Eagles were missing six starters, three from their secondary, but managed to put Manning and the offense in precarious situations.

“Knowing they were struggling with injuries in the secondary, personally I would’ve loved to attack them. But that wasn’t in our game plan,” said Odell Beckham Jr to ESPN after Sunday’s game.

Blame is being pointed toward their offense, but defensively the Giants are ranked 25th in scoring defense and have the 4th worst 3rd down defense in the NFL. With teams such as the Indianapolis Colts and Chicago Bears coming up on the schedule, who are ranked in the top ten offensively, some fans are worried about the holes on defense.

“Defensively they need to get better, their pass rush is bad, and they don’t tackle” Cruz said. “If arm tackling is the new way to tackle, they better get it straightened out. ”

The Giants have five  games left in the regular season, with two more divisional games against the Washington Redskins and the Dallas Cowboys. With a 3-8 record, the playoffs seem very unlikely.  Since the start of the 2017 season, the Giants have a 6-21 record, the second lowest total win percentage of teams in the NFL.

Although many bash Manning for his underachievement, some fans still feel Eli has some magic left in the tank.

“I’m with Eli all the way,” said Jesus DeLacruz of Highbridge, Bronx. “I think it’s the coaches fault for not managing the play calling well enough.”

The Giants can look forward to the upcoming 2019 NFL Draft, where  a large  pool of talented quarterbacks will be up for grabs. Front office executives and draft experts believe the Giants should look towards University of Oregon’s Justin Herbert or University of Missouri’s Drew Locke.

“Next year we should go all out for a quarterback, draft him and stash him,” said DeLacruz. “ It’s time to look forward to the future.”