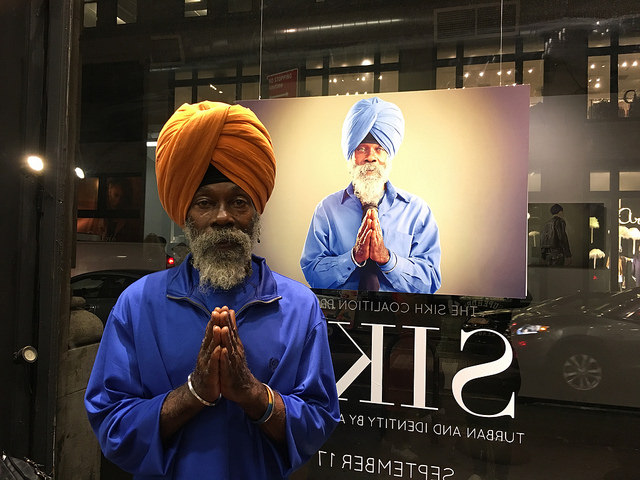 Lathan Dennis-Singh, an aerospace engineer from Fairfax, Virginia, is one of the subjects in the Sikh: Turban & Identity exhibition in Soho. Photo by Ang Li.

Sikh leaders say they do not have it easy. They face bigotry and many other forms of discrimination, but the optimism and hope the community shares is on display in the photo exhibition, Sikh: Turban & Identity.

Presented by the Sikh Coalition, whose mission is to fight bigotry aimed at this South Asian religion. The Soho pop-up exhibit features 40 men and women in turbans and was photographed by British photographers, Amit and Naroop.

One of the photography subjects, Raghuvinder Singh, was born in India and has lived in New Jersey for the last decade with his wife and two children. In the photo, his smile is of pure happiness. But his life was not as joyful as he looks in the photo. Four years ago, a gunman walked into the Sikh Gurdwara (Sikh house of worship) in Oak Creek, Wisconsin, killing six Sikhs and injuring several including Raghuvinder’s father, Baba Punjab Singh, who was left paralyzed and unable to speak. He e can only communicate by blinking.

Lathan Dennis-Singh, aerospace engineer of Fairfax, Virginia, was also photographed for the exhibit, He became homeless at 13 and came to the United States in 1967 on a scholarship to study at the University of Michigan. It is at college where he became involved with and finally adopted Sikhism. He faced discrimination at the workplace.

“There was no group like the Sikh Coalition that could come forward and stand for me,” he said. “Today, it’s a little bit different. There are more laws to protect the victims of Sikh discrimination, bullying, and hate crimes. This is why the exhibition is so important. It can reach the wider society.”

With a spirit of Chardi Kala (eternal optimism) in mind, he believed that the power of love, the kindness to help others, and public awareness could eventually combat the hate Sikhs were facing.

Growing up in a small town of North Carolina, Jagmeet Singh, now the Media and Communications Manager at the Sikh Coalition, said that he had experienced bullying as a child because of his long hair, turban and beard.

He joined the Sikh Coalition last year and has been using his communication and media skills to work for Sikhs’ civil rights.

“Besides legal aid that we provide for Sikh individuals experiencing harassment, discrimination, and violence, we also help to change policies so that there is less systematic discrimination,” he said. “We work to educate the public about Sikhism. We are also trying to track where the violence against Sikhs is happening. Soft discrimination is also included, like you walk down the street, and someone calls you a terrorist. But that’s much harder to track.”

Satjeet Kaur, the development and communications director for the Sikh Colaition believes education is the key to resolve their problems. The public should not only be told what the Sikh faith is, but also be able to find similarities over differences and to have a positive association through story sharing.

The exhibit closes on Sunday.