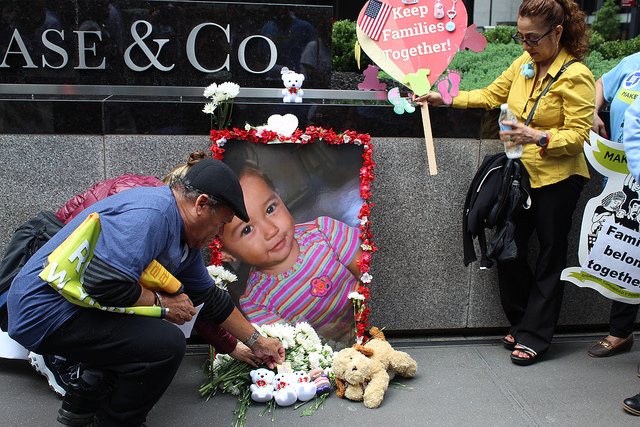 Protestors held a brief vigil for Mariee Juarez in front of JPMorgan’s headquarters in Midtown Manhattan. She died after being released from an immigration detention center in Dilley, Texas. Photo by Caroline Aguirre

A group of about 30 protesters stood in front of JPMorgan Chase headquarters yesterday in Midtown Manhattan, mourning the death of a Guatemalan toddler that got sick in an immigration detention center. They protested the bank’s role in funding these facilities.

“Standing here as a mother and being in front of a picture of a young girl that just passed away – I feel very affected by this,” said Edith Calderon, of National Domestic Workers Alliance. “You can’t find the words.”

The protesters joined together to speak out against JPMorgan Chase’s involvement in funding detention centers, which they believe is fueling the separation of families. They delivered signed petitions, urging the bank to stop lending money to CoreCivic and Geo Group – two of America’s largest for-profit prison corporations.

A report by the Center for Popular Democracy shows that JPMorgan is the single largest lender of these corporations. They loaned a total of $167.5 million as of March 2018.

The Guatemalan toddler Mariee Juarez and her mother , Yazmin, 20, stayed in a Dilley, Texas detention center run by CoreCivic and funded by JPMorgan Chase. Her mother has filed multiple lawsuits seeking $40 million in damages.

“This is the human face of the crisis that this bank is financing,” said protestor Marilyn Mendoza.

Three months ago the group protested in front of the home of JP Morgan Chase’s CEO Jamie Dimon.

“Now we stand outside his office because one of those children has died,” said Yaritza Mendez.

Ironically, Dimon has spoken out against Trump’s policy of separating children from their families.

A CNBC article states that Dimon referred employees to a statement by Business Roundtable which called separating children from their parents a “cruel” practice that’s “contrary to American values.”

Ricardo Aca, a DACA recipient, said Dimon is not hearing them.

“We were putting our bodies on the line – organizers and community leaders,” Aca said. “We want to send this message and want him to listen to us.”

JPMorgan Chase had no comment regarding the protest at its headquarters.

Protester Timothy Lunceford said he is looking for other banks that do not support the separation of children.

“Now that I know banks support separation of children, I’m looking,” Lunceford said. “The U.S. government supports this as a punishment, and children shouldn’t be punished.”

“I get the privilege of tucking my children into bed every single night,” said Gurnah.

“The 13,000 children being held right now in detention should have that opportunity to be home and safe.”

“As Jews, we are horrified to watch terrible history repeating itself,” Toback said. “The past two years we have witnessed Trump and his administration motivate and encourage bigoted people across the country.”

She believes America is closing its borders to helpless people, and JPMorgan is only forwarding Trump’s agenda.

“There are institutional backbones to these policies of hate,” she said. “The JPMorgan’s of the world – a civilized public face, even as they finance CoreCivic and Geo Groups without a care for the human misery resulting from their actions.”