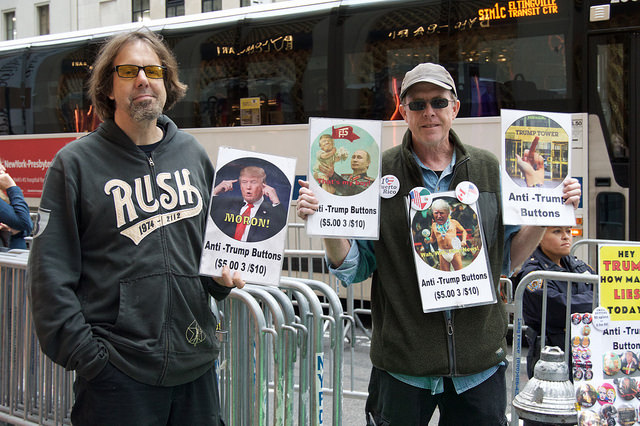 Paul Rossen and John Burke pose with their protest signs while selling anti-Trump buttons outside Trump Tower in Midtown. Photo by Samantha Springer.

As President Donald Trump arrived in Manhattan today,  two men used the platform of selling anti-Trump buttons to voice their concerns about the president and his policies.

Paul Rossen and John Burke both live in Manhattan and have been taking to the street to publicly oppose President Trump for just over two years.

“It’s a matter of protesting,” said Rossen. “And what the hell, let’s make a little money, too. Anything to blow off steam.”

Rossen made the decision to start protesting in 2016, just after Trump announced that he wanted a Muslim ban.

“I came out here over two years ago when he [Trump] said he wanted a Muslim ban,” said Rossen. “My mom grew up in Germany in the 30s and 40s, so this s*** about banning an entire religion, let alone “media is the enemy” really smacks of the early days of the Nazi regime.”

It is that very echo that motivates Rossen and Burke to spend hours every day standing on the street. Rossen originally started with just a few signs, but quickly moved to methods that got people passing by more involved.

“I was out here for quite a while before doing the buttons, but now it’s a great 1-2 punch,” said Rossen. 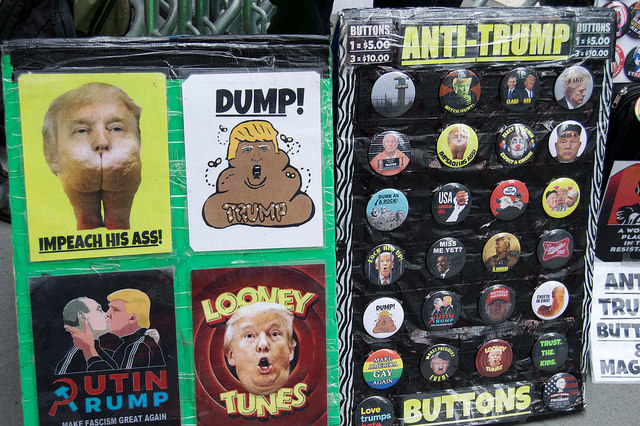 The buttons he and Burke sell bare satirical photos and phrases like, “Dump Trump” and “Cheeto in Chief.” At $5 per button or three  for $10, it’s not about making money, it’s about starting a conversation. Burke joined Rossen about five days after the election in 2016. For him, the challenge people present is fun.

“You get a lot of feedback, a lot of blowback from Trump supporters,” said Burke. “But you know what these people are thinking, you know what they are like, and you know the stereotypical things that come out of their mouths, “get a job, you must be on welfare, oh, you’re a civil servant. They just sort of yell implications at you and you have to laugh.”

Today, Trump came to town for only his third visit to his penthouse suite since taking office. The streets were littered with hundreds of cops and secret service agents, and the sidewalks were all but shut down with blockades, but Rossen and Burke were still there, selling their buttons.

There were no other protesters on the streets, but they didn’t get any outstanding opposition or hate from Trump supporters, either.

“No more than usual, but we still get it,” said Burke. “Got an angry Australian, that was unusual. I just pretended that I couldn’t understand him. That really pissed him off.”

All joking aside, Rossen and Burke are seriously concerned for the future of their country. Rossen pointed out that like Trump, both Hitler and Stalin believed and advertised that the media is the enemy of the people.

“Trump has already indicated he would like to curtail publications he doesn’t agree with,” said Rossen. “People don’t think that can happen, but that’s bullshit, it can happen.”

So, they’ll be back, rain or shine, day after day, to inform as many people as they can of the danger they see lurking on the horizon.

“It’s based on sheer hatred,” said Rossen. “And fear, frankly.”