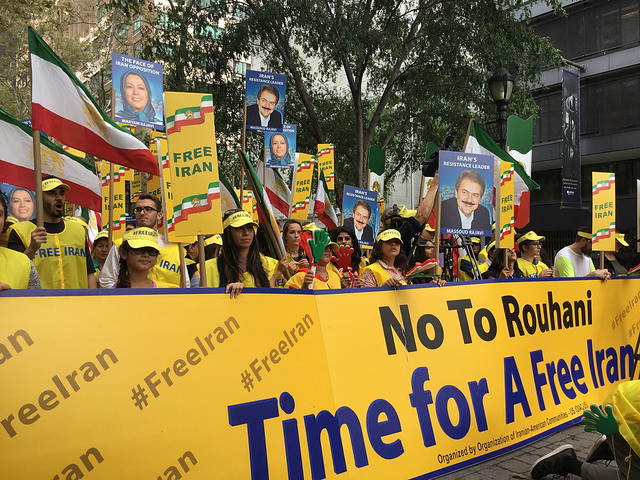 Protesters chanting “No to Rouhani” at the Free Iran rally outside of the United Nations yesterday. Photo by Monay Robinson

They beat drums, waved Iranian flags and chanted “No to Rouhani” at the Free Iran rally outside the United Nations yesterday.

They hoped their cries could be heard by Iranian President Hassan Rouhani, who gave a speech to the U.N. General Assembly at the time of the protest.

Hosted by the Organization of Iranian American Communities, the rally was filled with hundreds of protesters dressed in yellow. Many had horrific memories of their lives in Iran and blame the government for the suffering they said Iranians continue to endure.

“More than 30 of his high-ranking cabinet members are the ones who are directly involved in the infamous political massacre of the Iranian political prisoners in 1988,” said Amir Blurchi, one of the organizers.

Yesterday was the anniversary of the 1988 Massacre where more than 30,000 political prisoners were executed.

In honor of the executed piles of worn out shoes were placed next to signs that read “Where is my brother’s grave? Where is my sister buried?” Red Roses were also scattered amongst the signs. 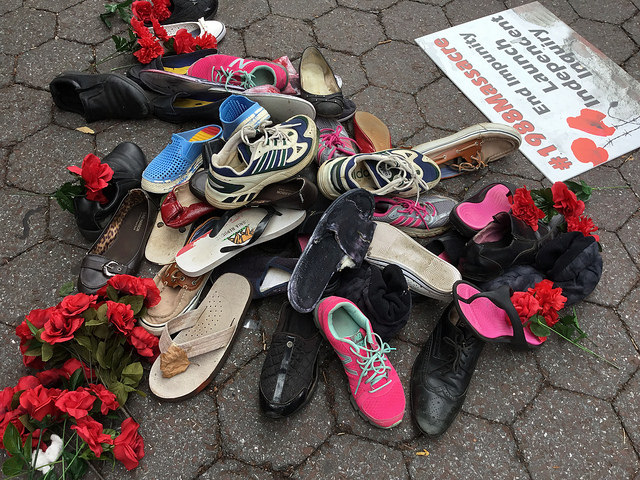 A pile of shoes are on display as part of the 1988 Massacre Memorial at the Free Iran Rally on Wednesday outside of the United Nations. Photo by Monay Robinson

“We call on the U.N. to establish an independent commission of inquiry on the 1988 massacre of political prisoners,” Maryam Rajavi, president-elect of the National Council of Resistance of Iran said to the protesters. “Why do you U.N.’s doors continue to be opened to the officials of a regime which has kept their grip on power by shedding an ocean of blood?”

Khosrow Ziaei, 71, native of Iran who lives in Toronto, Canada, said he witnessed horrendous acts in the 1980s right before the massacre.

“It’s unbelievable, they tortured my brother in front of my eyes,” he said. “They tortured husbands and wives, sometimes they tortured the children. I saw it with my eyes, one night in 1983, they tortured a girl until she died. I can never forget it.” 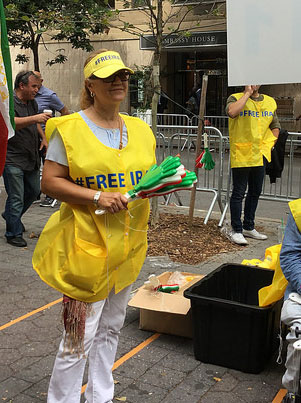 Sara Fallah, from Toronto, Canada attended the Free Iran Rally on Wednesday outside of the United Nations.
Photo by Monay Robinson

“There have been mass executions of people right after Rouhani was elected, more than 350 people,” she said.

Fallah said Iranians as young as 10 are being put in prison.

And mass arrests and executions are not the only sorrows under Rouhani’s presidency, she said.

“More than 85 percent of Iranian people are living under the poverty line,” Fallah said. “Money is in the hands of very limited people.”