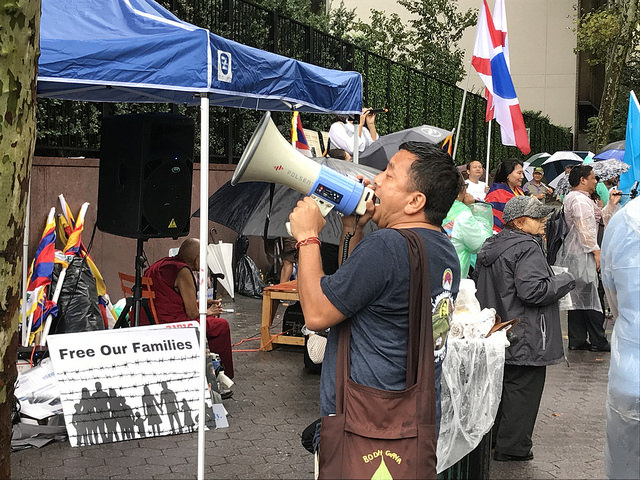 “Out out China out.” “Shame on Xi Jinping.” “Tibet belongs to Tibetans.”

These were just some of the chants repeated by protesters gathered outside the United Nations yesterday to protest the Chinese government.

Protesters objected to the alleged persecution of Muslim minority groups in the Xinjiang Region of China. Others called for the independence of Tibet from Chinese rule.

Ibrahim Osmanjan, 22, of Jersey City, New Jersey, is a member of the Uzbek community who participated in the protest.

“This protest is to peacefully demonstrate our viewpoints on the inhumane acts committed by the Chinese Communist Party,” said Osmanjan.

The protesters claim that the Chinese government is arbitrarily detaining members of these communities in political detention centers in Xinjiang — a province in China’s North West region which includes the area identified by some as East Turkestan.

It is alleged that those in detention are forcibly subjected to political re-education intended to align their views with those of the Chinese government.

Like many of the protesters, Osmanjan said that his family was personally affected by the activities in Xinjiang.

“I have family members being sent to re-education camps,” said Osmanjan.“And some family members which I have no idea of their whereabouts, whether they are alive, serving unlawful prison time, or being forced to abide by the Chinese practices imposed on Uyghurs”.

Salih Hudayar, an East Turkistani man now living in DC, said that he too had been personally impacted by the political detention centers in Xinjiang.

“I personally have over 86 relatives incarcerated in China’s concentration camps in East Turkistan,” said Hudayar.

Hudayar is the International and Political Officer of the East Turkistan National Awakening Movement. Hudayar said that his organization collaborated with Students For a Free Tibet and the Turkish American Federation in organizing the protest.

He said that this was one of many protests that his organization has been involved in.

“Our organization has actually been demonstrating in front of the White House for the past three  months,” said Hudayar.

The CECC, chaired by Senator Marco Rubio, said that sanctions were warranted because the Chinese government is subjecting Muslim ethnic minorities to ‘arbitrary detention, torture and egregious restrictions on religious practice and culture’.

Despite this positive response from Congress, Hudayar said that his organization’s activities have also garnered some negative responses.

“We have been constantly harassed by anonymous individuals online for our activities,” said Hudayar.