Protestors chant for an end to excessive suspensions of students 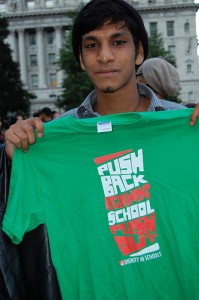 Vishwasrao, 18, was expelled from high school after suspensions for chewing gum and wearing hats. He would be a freshman in college this semester, but instead he is trying to get his GED. Photo by Kait Richmond.

Nilesh Vishwasrao should be a freshman in college, making new friends and studying English literature. Instead, he is nearly six months behind after being what he calls “pushed out” of high school.

Vishwasrao, 18, of Jackson Heights, Queens, was suspended several times in high school for minor offenses, such as chewing gum or wearing a hat. But when they added up, the guidance counselor called in Vishwasrao’s father.

“He told my Dad that high school wasn’t for me, and that I should just drop out,” he said.

So he did and does not expect to get his GED until next month. Vishwasrao isn’t happy about how he was treated, but he has found a way to have his voice heard. He joined the group Desis Rising Up and Moving, or DRUM, an organization that helps South Asian immigrant workers and families fight against social injustices they face in New York City, and students like Vishwasrao from being pushed out of school.

Yesterday, Vishwarao and about 40 others were chanting, holding up signs and letting City Hall know that disciplinary actions can have negative impacts on the learning environment, and push out discouraged students. They said since the NYPD took over security in the city’s schools in 1998, there have been over 500,000 suspensions. The campaign was part of the Dignity in Schools Campaign protest at City Hall Park. Students rallied with teachers and advocates from organizations around the city.

Event organizer Natalie Havlin, a member of Teachers Unite, said that students put together a proposal for New York City Police Commissioner Raymond Kelly that suggests ways to reduce suspension among minorities. Tuesday was meant to be a kick-off event, where students would deliver a letter with the proposal, and it coincided with DSC’s “Week of Action” that included 28 other cities pushing for similar changes.

Excessive suspensions cause students to fall behind. Minority students suffer the most, according to a 2011 study on the use of suspension in NYC schools. Black students make up 33 percent of the student body, but make up 53 percent of students who were suspended in the last ten years.

Metal detectors are just another part of the day. Another study found that close to 95,000 students have to go through them every day, and schools like these have 48 percent more suspensions than schools that did not install metal detectors. 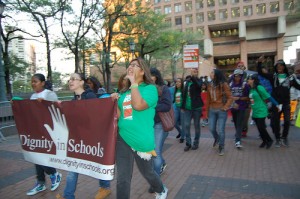 The students delivered a letter to NYC Police Commissioner Raymond Kelly stating that since the NYPD took over security in the city's schools in 1998, there have been over 500,000 suspensions. Photo by Kait Richmond.

“I am a senior at Queens Collegiate High School who feels like a prisoner in prison,” Abeer Ahmed yelled into the microphone.

Ahmed, a DRUM member, grew irritated as he read his speech about his own experiences with the security system.

“When I wake up in the morning, the first thing I say to myself is, ‘Oh great, metal detectors,’” he said.

Students cheered in agreement and waved neon signs with chants like “Whose school? Our school!” written on them.

Chant leaders, mainly students, pumped up the crowd with rhythmic chants that drew in a few outsiders.

Troy Cordice, 17, of the Bronx, said he was not there because anything bad had happened to him – in fact, he bragged about how great his high school was, but he knows that many other students are not as lucky.

He said he participates in these events a lot because he’s seen how they can have a real impact.

After six speakers and a theatrical performance of students going through a cardboard metal detector and being patted-down, Cordice and other chant leaders led a march to One Police Plaza, the NYPD headquarters.

In a fenced-off area surrounded by cops securing the sidewalks, the students continued their chants. They presented their demands in a letter to Commissioner Kelly, which suggested retraining the School Safety Officers which is part of the NYPD to better understand the best practices for working with the students, rather than immediately disciplining them.

They marched back to the park, and in one final burst of encouragement, Vishwasrao led the students in a chant while he spun around arm-in-arm with a friend.