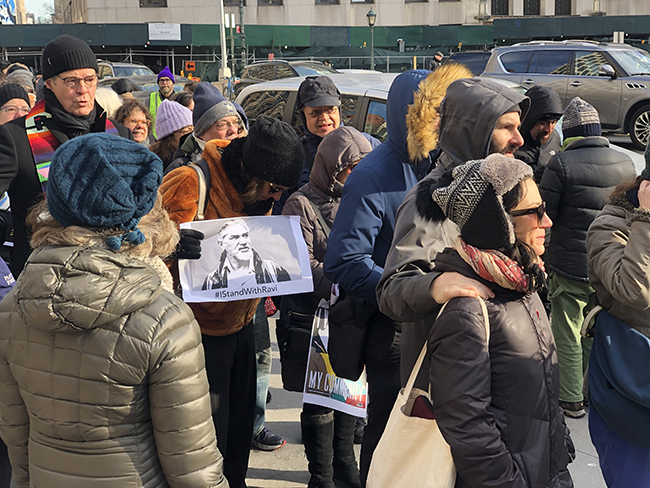 #IStandWithRavi signs are popular amid the crowd gathered outside the US Customs Court and Federal Building Monday morning. They were there in support of  Ravi Ragbir, an immigrant rights worker who is facing deportation. Photo by Samantha Springer.

Friends and supporters of Ravi Ragbir gathered on the front steps of the Federal Plaza in Lower Manhattan yesterday morning to stand in solidarity with the Trinidadian immigrant who was being forced to present himself for a second yearly “check-in” with ICE.

Led by Rabbi Joshua Stanton, the group also protested what they called the racist policies affecting immigrants and organizations that support them.

“We are here fighting for justice, fighting for the rights of immigrants across our city,” said Rabbi Staton. “And we are here because we are moved by our faith traditions, by our ethical framework, and by our love for a person who has become a true leader in our city in so many ways.”

Ragbir is the executive director of the New Sanctuary Coalition of New York City who legally immigrated to New York in the early 90s. The Coalition works to protect the rights of immigrants and help them oppose deportation. In 2000, Ragbir was convicted of wire fraud, a charge that warrants deportation in most cases, but until recently, he had been granted temporary stays because of his work and family.

This is the second year the group has gathered to support him. Last year he came face to face with the possibility of being deported after being detained at his check-in, but ultimately was not.

The gathering started in a rally-like fashion, with speaker after speaker showing their support for Ragbir and calling for the crowd to join them. Savitri Durkee, an activist with the Stop Shop Choir, led the crowd in singing the freedom song, “Woke Up This Morning” before other choir members took the lead with “We Got the Beat of Freedom.”

“We will sing Ravi-lujah,” said Durkee.

And sing Ravi-lujah they did.

As the echoes of their songs began to fade, Ragbir left the group to face his check-in and Rabbi Stanton called for the crowd to prepare for a Jericho Walk around the building.

“We are going to begin our Jericho walk, showing with our bodies, with our hearts, with our spirits, that we will stand with Ravi,” said Rabbi Stanton. “That we are here today in support of immigrants and that we care.”

A Jericho Walk is a sort of prayer walk derived from the biblical walk that God instructed the Israelites to make around the walls of Jericho in Joshua 6. Today, those gathered formed a single file line and marched, without saying a word, in front of the United States Customs Court and Federal Building and around the entire building. 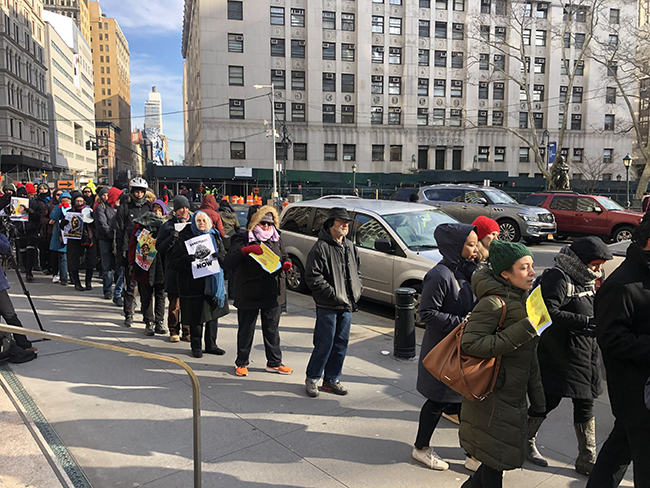 The silent line of protestors stretches around the front of the U.S. Customs building  in a “Jericho Walk.”  Photo by Samantha Springer.

In the crisp morning air, they hoped their silence spoke volumes.

Barbara Young immigrated to the United States from Barbados in 1993. This morning, she came out to show her support for her friend Ravi Ragbir, but had to step out of the Jericho Walk after the first lap, her knee replacements preventing her from continuing her march. For her, being here to show her support is personal.

“I know him personally,” said Young. “I was involved with a local organization of domestic workers here in New York, and he was an organizer in the social justice movement. He came to our organization to speak to the women and give the support they needed at that time. Today, I am very sad at what’s going on.”

She is not sure what the future holds for immigrants and others like Ragbir who she, and many of the others gathered, believe are being targeted for their activism in immigration politics, but moments like this morning restore some of her hope in the solidarity of the movement.

“I’m here with a heavy heart,” said Young. “But it kind of lifted my spirit to know, when I see how many people are standing here with him today, to know that I can come out and support him.”

Protestors from an organization in Arizona called No More Deaths also participated. Holding signs that read “Water not Walls” and cardboard cut-outs of water jugs, these men and women demonstrated their outrage at the decision made by a federal court in Tucson on January 18th to convict volunteers who left water in the desert for migrants.

John Washington from No More Deaths took the microphone and spoke of the charges.

“Four of our volunteers…” said Washington, “just a couple weeks ago were charged and convicted of littering for leaving water out on particularly brutal stretches of western Arizona deserts.”

According to Washington, another one of their volunteers, Scott Warren, was charged for allegedly harboring migrants and faces up to 20 years in prison.