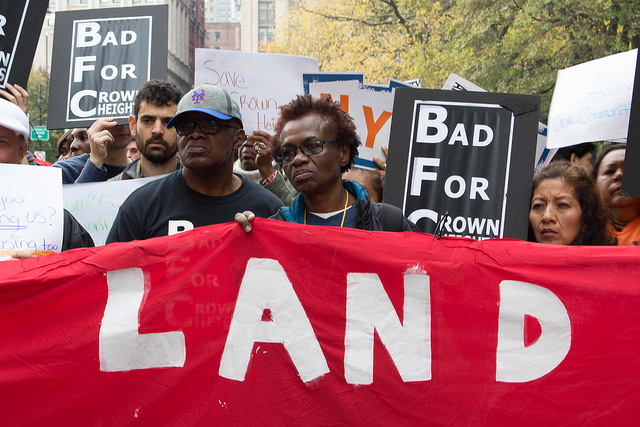 Protestors marched outside of City Hall in Lower Manhattan to voice their opinion against the Bedford-Union Armory development plan. Photo by Claire Tighe

On Thursday morning, Vaughn Armour, 67, stood outside City Hall wearing a shirt that read, “Bad For Crown Heights,” with bold emphasis on the B, F, and C.

Armour and fellow New Yorkers were continuing a months-long protest against the redevelopment of the Bedford-Union Armory. The project, led by private developer BFC Partners, would convert the former National Guard building in Crown Heights, Brooklyn, into a mixed-use neighborhood complex, featuring rental apartments, condominiums and a public recreation center. The city gained ownership of the building in 2013. It has remained mostly vacant ever since.

Armour, a Crown Heights resident of 17 years, worries that developing the armory will further gentrify his neighborhood.

“That armory is one of the biggest gentrification projects in Brooklyn,” he said. “So it’s going to have a big effect. (Developers and new tenants) come in and the longtime residents like me and my neighbors will be pushed out.”

Earlier this week, the City Planning Commission approved the plan to redevelop the armory. The City Council will review the plan before the end of the year. It currently has Mayor Bill de Blasio’s support.

Protesters chanted, “kill the deal,” a refrain of encouragement geared toward Laurie Cumbo, City Council Member of the 35th District, where the armory is located. Cumbo’s office said in an email statement that the Council Member’s position on the deal has not changed. She voiced her opposition in May 2017 and still plans to vote no.

Protesters say that the city council is likely to follow Cumbo’s lead about whether to approve the project.

“That’s not by statute, but it’s local tradition,” said Esteban Giron, 39, a Crown Heights tenant. “The city council follows whatever vote the local council person has.”

Esteban Giron, 39, a Crown Heights resident, holds a bullhorn for a protest to “Kill The Deal” outside City Hall. Photo by Claire Tighe

BFC Partners’ current plan offers the neighborhood 330 rental apartments units and 60 condominiums. Half of all the units will be considered affordable by city standards.

In statements to Commercial Observer and Patch, BFC Partners spokesman Sam Spokony said, “We’re committed to providing a new affordable recreation center, affordable office space for nonprofits and affordable housing for the Crown Heights community. As the Bedford-Union Armory continues to sit vacant, this is an opportunity to make it a place that truly serves local families.”