Protests are becoming the new normal 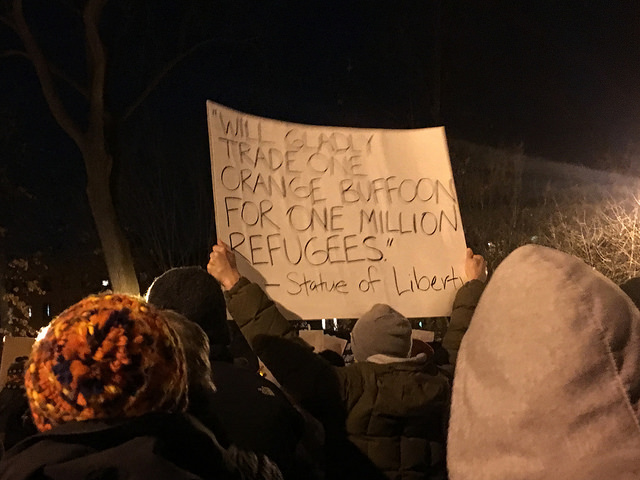 Hundreds of protesters gathered Monday at Tompkins Square Park Rally Against Hate, and many carried creative signs including this unofficial quote from Lady Liberty herself. Photo Credit: Cassidy Morrison

Hundreds gathered at Tompkins Square Park tonight for the Rally Against Hate, displaying signs that supported an end to racism, the ban on Muslim refugees, the proposed building of a border wall, and women’s reproductive rights. This was just the latest in a week fraught with protests and marches against the new Trump Administration’s executive actions.

The recent proliferation of protests and grassroots movements points to increased public discourse on politics and human rights. The Rally Against Hate was one example of an energized city eager to invoke change in Washington.

“This is a school night, and look how many people are here,” Sheryl Nelson, 41 of the West Village said, pointing to her 12-year-old son. “There have been protests in D.C. in the past about pro-choice, against nuclear war, what have you, and I feel like I’ve never seen so many people out protesting.. I think that elected officials will see that people are showing up and protesting and chanting, and hopefully that will inspire them to do the right thing,” Nelson said. 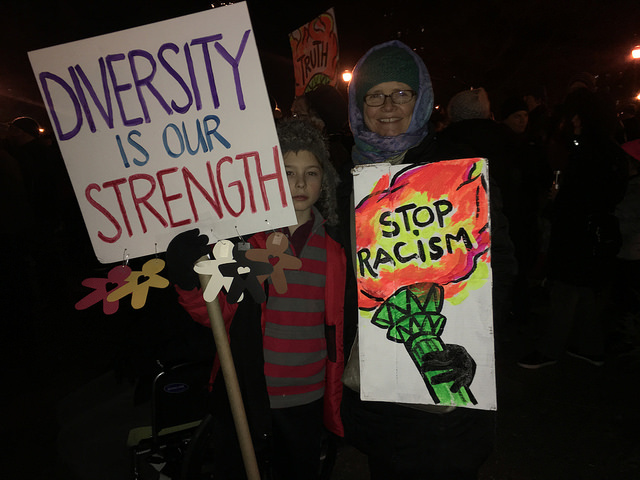 Sheryl Nelson, 41 of West Village joins Tompkins Square Park Rally Against Hate with her 12-year-old son: “This is a school night, and look how many people are here!”
Photo credit: Cassidy Morrison

Rather than dwelling on the fear that permeates throughout the country, protesters expressed their optimism that public demonstrations would inspire the public at large to get involved with a cause that they care about.

“I wish we didn’t have to do it this way, but the good side is that we have a lot of people active,” said Tamira Wyndham, 48 of the East Village. “My purpose here is to encourage people to do more than just attend protests, but also to get involved with an organization and work on specific things, whether they want to change a law or whatever they want to do.”

Wyndham stressed the need for protesters to go further than attending a demonstration.

“I think protests are really important, but I don’t think they’re enough by themselves,” Wyndham said. “A one-time protest is great, but it doesn’t do anything by itself. You have to keep the pressure. These are great, but there needs to be more.”

Amid loud chants of “Dump Trump”, protesters chatted excitedly with their neighbors. They complimented each other’s signs. They munched side by side on free vegan donuts being passed around.

“I think this woke something up in people, it got people off the couch and on the streets instead of complaining,” said Joy Lau, 32 of the East Village. “When I came here and saw that there are so many people actually protesting, putting in their time, standing in the cold, I see that we all need this support.”

Lau, among others, expressed the importance of carrying on widespread movements and protests like this one, in order to give people a new outlet for expressing themselves while remaining in solidarity with one another. This was not, in her view, sore losers commiserating but rather hopeful citizens showing strength.

“I don’t know if this is the new normal because it’s not normal at all,” Lau said.” I think it’s actually good that all of us came out in the first week. It’s like a frog being put in slowly boiling water. If this came out slowly, we might not notice it. We know that we have to take action. The feeling is that we have to do something right now.”

Lau’s urgency has been echoed across the country and will, in her view and in that of many, continue throughout the next four years as more people feel the need to let their voices be heard.