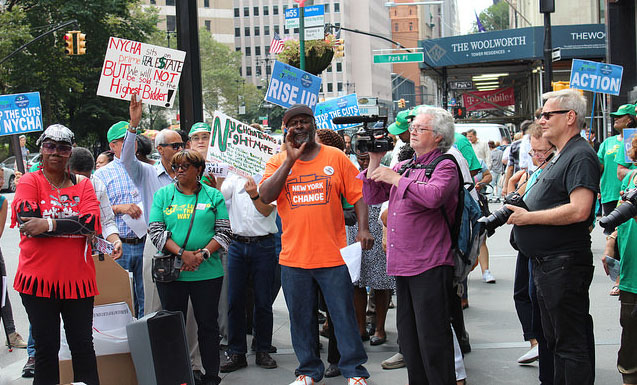 “Before I moved to NYCHA Queensbridge, I lived in Sunnyside for five years, but I was evicted from my house to a shelter,” said Ok Soon Son, a current resident of one of New York City Housing Authority’s Queensbridge housing developments.

Son came to protest in front of the NYCHA headquarters in Lower Manhattan. Twenty-five years ago, Son was evicted and then threatened by child protective services to either find another home for her two young children, or risk losing them to foster care.

“All human beings should know that housing is not a luxury but our basic human right,” she said. “If there was budget cuts and the government did not give me a house in NYCHA Queensbridge, my family could have been separated. There should be no family being separated from each other because of housing.” 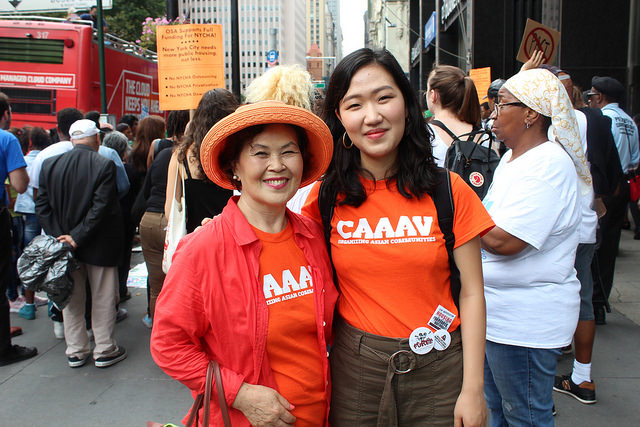 Ok Soon Son (left), an Asian immigrant who spoke at the NYCHA rally on the importance of public housing Thursday afternoon at the NYCHA Head Quarters, downtown Manhattan, alongside her colleague Seonae Byeon, a former tenant organizer at CAAAV, who translated Son’s story to a crowd of protesters. Photo by Keziah Tutu

Under President Trump’s proposed 2018 fiscal year budget, the Department of Housing and Urban Development will cut NYCHA budget by $6.8 billion. These cuts will affect public housing organizations which provide housing to about 400,000 New York City residents.

According to the NYCHA, this will affect the availability of public housing units, increase the cost of rent and affect supplemental housing programs such as Section 8.

District Council 37 AFSCME, the union for NYCHA workers, along with the Committee Against Anti-Asian Violence and Families United for Racial and Economic Equality, formed a circle at the protest and shouted, “’What do we want? More funding! When do we want it? Now!’”

Julian DeJesus, a member of District Council 37 AFSCME said, the rally isn’t only about getting more funding, but it’s to make sure those funds go to the right places so residents live in better conditions.

“We know that it will be difficult to create a better system in NYCHA and public housing across the country if they don’t have the funds to do so,” he said. “We want people to live comfortably and there is no reason why people should be living in slums.”

DeJesus said that with the community’s involvement, the goal is to get the president and Housing and Urban Development Secretary Ben Carson and other community leaders to see the importance of funding public housing.

“We don’t want them to cut what we already have, which is already lacking,” he said. “We’re on the defensive at this point but if we could get more people out here, more people fighting, more people aware, we would be in a better situation.”