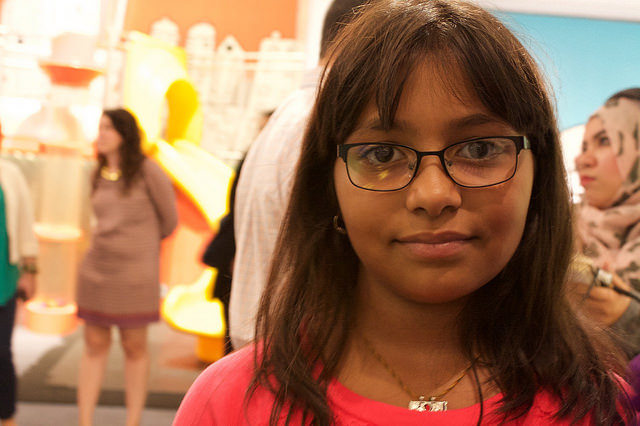 Amani Aboelnour, 9, of Brooklyn, gave a speech today at the Children Museum of Manhattan in honor of Eid al-Adha becoming a public holiday in New York City for the first time. Photo by Ugonma Ubani-Ebere

A young girl with dark hair and glasses, of Egyptian and Puerto Rican descent, looked around proudly as teary-eyed guests gave her a standing ovation. Amani Aboelnour, 9, of Brooklyn, had just given a moving speech at the Children Museum of Manhattan in honor of Mayor Bill de Blasio officially closing down New York City public schools for the first time in honor of Eid al-Adha.

“I came to celebrate and cheer for the people that are looking forward to this day,” Aboelnour said at the event yesterday. “Today kids don’t have to school on Eid al-Adha, and can celebrate with their family and friends.”

“When I saw Eid al-Adha on my daughter’s calendar when she was doing homework, I cried,” Souad Kirama, 49, from Queens said. “To see Eid al-Adha next to Christmas and Yom Kippur and all the federal holidays, and to be in inclusion was a dream come true.”

Kirama, is a community activist and member of the serving committee that campaigned for Muslim holidays in schools. She said she was a victim of hate crimes post 9/11, and decided to step up and become a community organizer to speak up for Muslim mothers that were victims of hate crimes and attacks.

Andy Ackerman, 61, the Executive Director of the Children’s Museum of Manhattan smiled and mingled with guests that came to witness the event. Ackerman was thrilled to host the event at the museum, which was also celebrating September’s Muslim Arts Festival.

“The Children’s Museum of Manhattan is hosting this event because we worked with the Coali-tion for Muslim School Holidays to present an exhibit that will open about Muslim culture.”-Ackerman said. “Because we celebrate all different artistic and religious traditions for all families, so because this is a holiday for school kids, it made so much sense to do it at the Children’s Museum of Manhattan.”

The Coalition for Muslim School Holidays rallied and petitioned for years for Muslim holiday inclusion in New York. Many Muslims rallied behind Mayor de Blasio, who promised a more inclusive New York during his campaign.

“We endorsed de Blasio for his progressive views, and we didn’t regret it,” said Kirama. “We mobilized the Muslim community to vote for him, and unity was our key to victory.”

Children with “Eid NYC” shirts ran around and played as parents and reporters tried to get pic-tures of them with city officials. As the event ended, the feeling of the holiday still lingered on as people left to enjoy the rest of the holiday.

“One word to describe today is proud,” Aboelnour said. “To actually stand up in front of everyone and say through my heart and mind what I really felt about this day made me proud.”

The historical inclusion of Eid al-Adha as a holiday in New York proved to many Muslims they were finally being accepted as New Yorkers.

“Things have changed”, said Kirama. “We fought hard, we have become another fabric of New York City, and now we are a part of the melting pot.”

“What do you call a girl that is Egyptian and Puerto Rican?” Ackerman asked the crowd after Aboelnour’s speech. “A New Yorker.”

The crowd that was predominately made up of New Yorkers of Muslim faith, proudly cheered.