Yevhen Trachuk is a Ukrainian LGBTQ rights activist. The 25-year-old started their own LGBTQ rights organization in their hometown in Ukraine’s Donbas region, before moving to Kyiv, where they worked as a project assistant for the organization Kyiv Pride. Before Russia invaded, they were working with Kyiv Pride on a project to raise awareness about the LGBTQ community in Donbas. The Donbas region has been partially controlled by pro-Russian separatists since 2014. 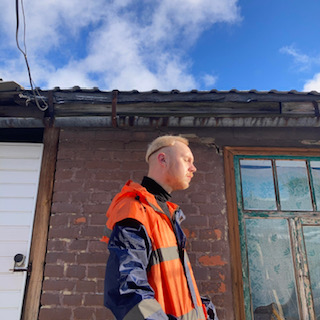 Since this interview took place on Feb. 26, Trachuk has relocated to the western Ukrainian city of Ivano-Frankivsk. At the time of the interview they were spending nights in Kyiv’s metro stations, hiding from bombs, and returning to their apartment in Kyiv during the day. Trachuk has close-cropped reddish-blond hair and a short beard. They wear a plain black T-shirt and have Airpods in. As we talk on Zoom, they periodically vape and apologize for their answers to my questions, telling me that they would normally have better responses but that it’s hard to focus when your entire country is suddenly at war. The interview took place at 5 p.m. in Kyiv, and as it progresses I can see the light fading from the city’s sky.

Where are you right now?

I’m still in Kyiv, me and my friends are together. We spent the whole night in the metro station. And in the morning, we have to go back and take out things like clothing and all that stuff and be ready for the same tomorrow. So we’re going to go to Ivano-Frankivsk, to the west of Ukraine. But as far as I know they told us to be home until Monday. So maybe if we cannot go tomorrow we go on Monday to the railway station and still go into the west of Ukraine.

How are you doing?

I want to believe and actually I’m hoping that everything’s going to be fine. Like we will come back to our lives as it was before. But it’s quite sad because it’s so absurd to be in your city and in your country have to escape somewhere. There’s just so many ways of how the situation can escalate in the future. It’s the most scariest thing for me because I don’t want to live in Russia because I was born in a free Ukraine, independent Ukraine.

We’re trying to do the most that it is possible to do in this situation. We are raising some money for the transportation of the staff and the people or LGBTQ+ people to go somewhere in safe places. But many of us are giving interviews to people, so we can tell you and other people about the situation. And we also keep in touch with the community. We support them, make the posts, the stories, also  have some dialogues, some DMs.

Obviously you’re worried for your own safety because of the invasion. But are you worried that people in the LGBTQ community will be targets?

For now, it’s kind of changed for me because I was always fighting for the community for the group I am part of, and as of now I just worry about all the people of Ukraine. So it’s hard for me to divide whether they’re gay or heterosexual. I just worry for all the people. I’m from Donbas originally. So I saw the war happening. So I know how it works, how Russian Federation can affect you, what they can do to people.

What was it like growing up LGBTQ in Donbas?

I’m from a small city, so when the whole occupation thing started it was so scary to me because I know about the Russian Federation, about the gay propaganda. I was also worried that people would think that gay rights is not important, that because there’s the war going on, there is no need for that. But still I created my organization back in 2019. And after that I joined Kyiv Pride. So now I’m here trying to help in all the levels that I’m capable of.

When did you move to Kyiv?

It was somewhere in the end of 2020. My idea was to just stay as much as possible in my hometown. But I became more visible. It was kind of impossible for me to stay because people saw me on the streets and they were kind of angry like I have all this homophobic stuff about me. And also I see that my parents are also kind of not fine with that because they see that I’m kind of a target for other people so they worry about me. So it was the best decision to move to Kyiv so I can be whatever I want to be and do my stuff.

Do you feel like things have gotten better for the LGBTQ community in Ukraine since you were growing up?

Actually yes. I remember myself being a teenager and seeing all this stuff like trying to be close to Russia or the same as Russia and I was seeing all these laws about forbidding gays in Russia and I was afraid that it also will be the same in Ukraine. So I was feeling alone. But I feel like the things started to change. Now there are more human rights activists, LGBTQ+ activists, many organizations doing some stuff for the community. Even though we don’t have some laws that I can marry someone I love here, I’m sure the society in general became more tolerant. I see many people being their true selves.

If Russia takes over Ukrainian territories, do you think they will put in place anti-gay propaganda laws?

Yeah. Because Ukraine decided to take the European path, the human rights path. And this is  the most hated thing for Russian government, because they tell people that gay people are bad people, that trans people are bad people, that people who support Ukraine are Nazis and fascists. For me actually seeing all that stuff every day for eight years, it’s quite obvious that they would do it to us. They want to control Ukraine in all spheres.

Are you worried that any progress on gay rights is just going to stop until whenever this might be over?

I’m sure that if the baddest happens, if Russia takes control of Ukraine, it’s bad for all and for gay people also, because still they don’t like gays. Gays in Chechnya, people get stopped and put to prison. So it will be the same in whole Ukraine, because they do it in Donetsk, for example, there are concentration camps. They just put there people who support Ukraine, who are gay people and all the people who are kind of like too West for them. It’s pretty basic for Russia I think just to hunt people they don’t like. And we had laws on the way to the government to be accepted and discussed but right now the war is happening so all these processes stop.

What are Kyiv Pride’s next steps?

For now it is to go west, to go to Lviv, to go to Ivano-Frankivsk, and in the baddest situation just go somewhere abroad, but still to have the organization working and support people of our nation in whatever ways is possible. Just to forget about this, it would be hard. So I think that we will continue doing what we can do.

Is there anything else you want to say?

I just want to say that I’m just thankful for people that support us. They make posts, repost, they worry about Ukraine and people of our country and If you’re thinking of what to do next, or how to support Ukraine, there are some donation pages here to support our army. And you can also go to demonstrations to show the government that actually this is not just a Ukraine war, Ukraine-Russia war.

This interview has been edited and condensed for clarity.