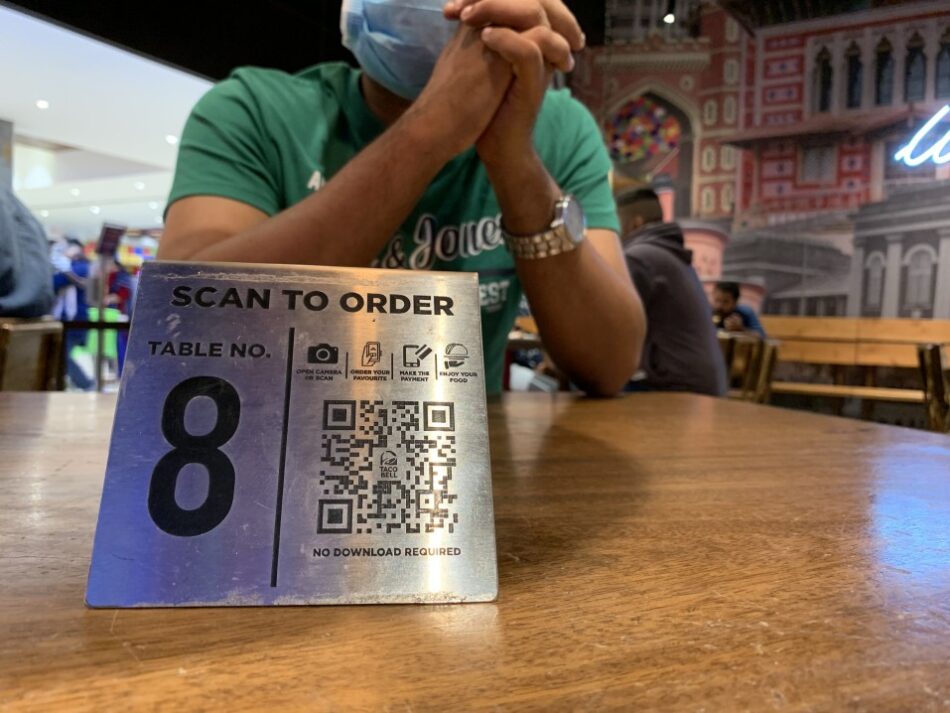 QR codes serve as menus in restaurants since reopening during the pandemic. Photo by @vijayeshvijayan via Twenty20

For some elderly and low-income individuals, QR codes in restaurants pose accessibility issues that make it difficult, if not impossible, to order food or even to access the menu at all, according to Joe Guszkowski, a senior editor at Restaurant Business Magazine covering technology.

“There obviously is a significant chunk of people who would not be able to use a QR code,” he said. “I think it does cut out a certain group of people.”

QR codes, square-shaped barcodes that take customers to a website or document, were first implemented in restaurants with the onset of the pandemic as a way to replace high-touch traditional print menus with a contactless, digital alternative. By scanning the code with their smartphone’s camera, customers can look at a PDF of the menu or the restaurant’s website.

But QR codes are not as simple, or accessible, as they might seem.

Erin Taylor, 25, grew up in a Mennonite household where no one in her family had or needed a cell phone. Taylor didn’t own a smartphone until 2017, and said her current phone, an older Android, doesn’t have the capability to scan a QR code menu.

“People with newer phones or with iPhones just open their camera and then it senses the QR code, but my phone doesn’t have the capability to do that,” said Taylor.

Taylor said QR code menus at restaurants are “frustrating and inconvenient” and present barriers for homeless, low-income, or elderly people who might not have a smartphone or who are unfamiliar with QR codes.

“It’s just classist to assume that everyone’s going to have a smartphone that is functional,” said Taylor.

Twenty-four  percent of low-income Americans don’t own a smartphone, according to Pew Research Center. Moreover, 17.9 %of the New York City population lives in poverty, compared with the 11.4 % national average, according to the United States Census Bureau.

In New York, older adults are the fastest-growing age-group of the population, according to the Center for an Urban Future, with a 26 % increase of New Yorkers over the age of 65 in the past 10 years. By comparison, the state’s overall population grew by just  3 % for the same period.

Rosa Bandera, 58, is a resident of the Lower East Side in Manhattan and works in a restaurant in the West Village. The first time she encountered a QR code menu at a restaurant, she was daunted by the technology, which she had not known how to use before.

“I was first intimidated by them because it was sort of like, what is this? How do you do this?” she said.

Bandera said she had to ask the waiter for assistance the first few times she encountered QR code menus.

“There were a few situations where the actual waiter has taken their time and come up to me and been like, ‘No, no, no, this is how you do it,’ and given me more of a positive vibe that I’m not being so stupid,” she said.

Many restaurants turned to the QR code not only as an alternative to high-touch print menus, but also as a way to navigate the massive labor shortage that left restaurants 5.9 million jobs short.

Guszkowski said the QR code menu was especially beneficial to restaurants who had to deal with the loss of wait staff to serve customers.

“Labor is such an issue right now. If you can eliminate the need for someone having to be visiting that table multiple times throughout the meal, that’s a win for restaurants,” said Guszkowski.“But I’m not sure it’s great for the customer unless the customer is just looking for that convenience factor.”

Guszkowski said QR codes are ideal for restaurants who have in part replaced their wait staff with QR codes, but not as ideal for customers who might miss or require a print menu.

“I have heard some restaurants saying that consumers are coming in and asking for a regular menu, they don’t want the QR code anymore” he said.” I think that it’s a really good solution for restaurants, but ‘m not completely sold on the fact that consumers are going to accept this long term.”

Since the onset of the pandemic, QR codes have experienced massive growth. QR code downloads have seen a 750 percent increase in the last 18 months, according to Bitly, a URL shortening service.

There will be no end in sight for the QR code, Guszkowski predicts.

“I don’t really see restaurants giving up on this too soon,” he said. “I do think there are mixed feelings among consumers, whereas restaurants I think are probably pretty much on board with this, at this point. It may just be a matter of customers having to just get used to it.”