Queens protesters say “no” to Amazon 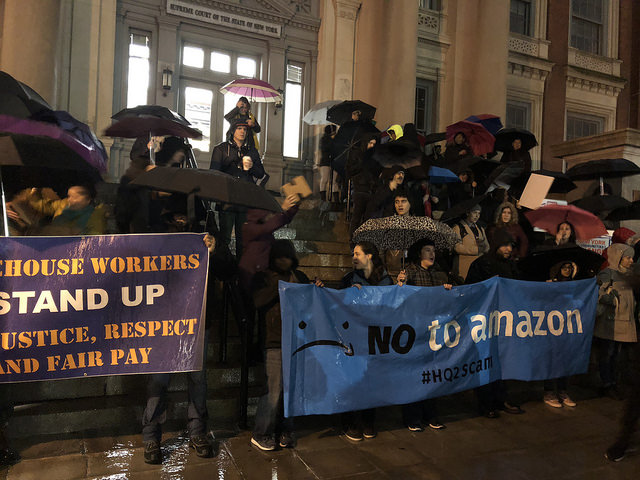 About a hundred Queens residents stood near the proposed location of Amazon’s new headquarters in Long Island City in the pouring rain yesterday and chanted, “Hey hey, ho ho, Amazon has got to go” as they protested multiple aspects of the company’s move to New York.

Zachary Lerner, Labor Director for New York Communities for Change, said that his greatest concern was the city’s subsidies to Amazon. He believes city dollars should go towards helping New York’s homeless population, as well as working to increase affordable housing, repair the subway system, and better education throughout the city.

“We’re here today because we’re saying no to Amazon receiving $3  billion in subsidies to move to a place where they already plan to come all along, especially when we see problems in housing,” he said.

Others, including Dannelly Rodreguiz, were more concerned about the conditions that Amazon workers face.

“Amazon is not friendly to the working class at all,” said Rodriguez, a member of Queens Democratic Socialist of America and a student CUNY School of Law, said. “Here their jobs may be $15 an hour, but that’s not gonna suffice if the price of living is gonna be jacked up from such an influx of high incomes coming into New York City.”

Life has not been easy for many Amazon workers who have been fighting for better treatment and benefits. The company recently raised the minimum wage to $15. However, it reduced bonuses and abilities to invest in stock, which makes some believe that the raised wage will only hurt workers. 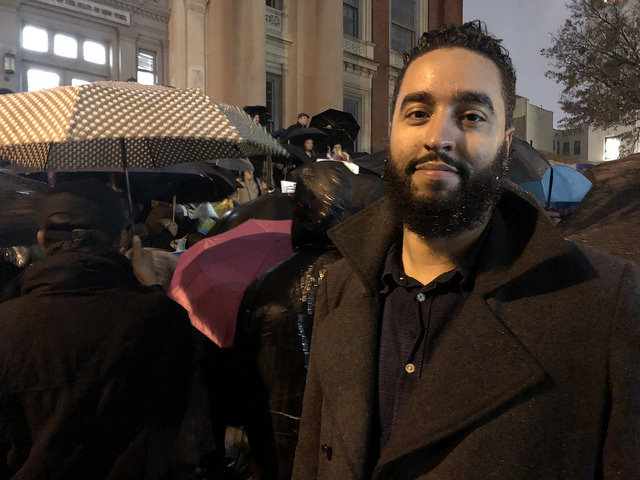 Meanwhile, other protestors were worried that by moving into the Long Island City area, Amazon would price out and displace residents.

“He (Jeff Bezos, CEO of Amazon) has the resources and should actually be demanded to pay to come and relocate to wherever he may be setting up this business because he’s going to displace hundreds of thousands of people,” said Rachel LaForest, Queens resident and labor organizer.

Though LaForest does not want Amazon to come at all, she said if they do, she wants to see corporate practices changed.

“I would love to see them agree to neutrality so that their workers can be organized,” she said. “Rather than taking the subsidy, they should offer them the money they would’ve been offered by the city to ensure that some truly affordable housing can be erected in the neighborhoods where their headquarters are going to be.” 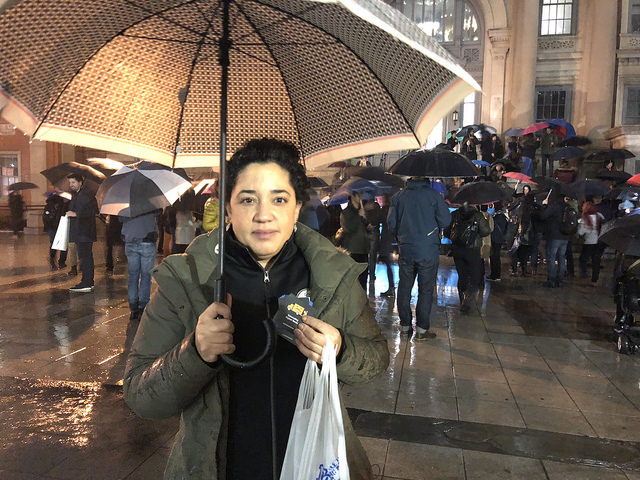 Amazon supporter Michael Klett, a Long Island City resident, didn’t share these concerns. Instead, he thought Amazon’s arrival would only help the area.

Among the protesters was a supporter of Amazon’s arrival who held up a sign that read, ‘Welcome Amazon.’

“I think this is gonna bring a lot of economic opportunity,” Michael Klett, a Long Island City resident said. “I feel like New York’s never been one to back down from a challenge and this presents a challenge and it’s an opportunity.”

Klett said he believes Amazon benefits not only tech people, but  the thousands of people that work in the nearby restaurants nearby, local shops, and businesses.

But the protesters worry that Amazon’s arrival will not give jobs to local residents and that the surrounding communities will be hurt rather than benefitted.