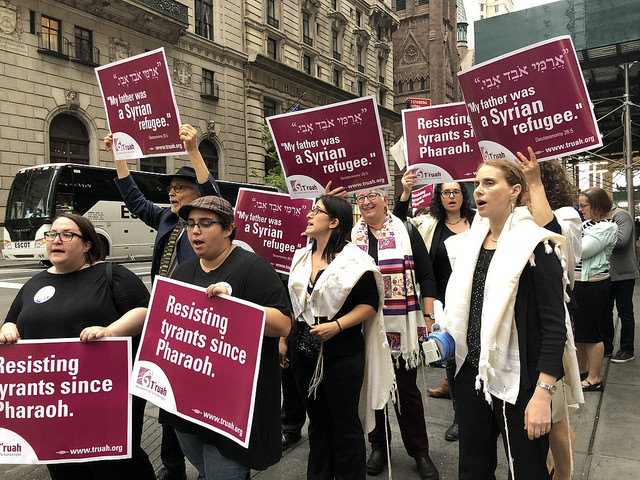 Rabbis protest outside of the Trump Tower in Midtown this morning in response to the government’s immigration policies. Photo by Monay Robinson

Dozens of rabbis gathered outside the Trump Tower in Midtown this morning and held up signs that read “My father was a Syrian refugee” and “Resisting tyrants since Pharaoh” in response to the administration’s immigration policies including the Muslim ban and ending the Deferred Action for Childhood Arrivals, or DACA.

Rabbi Mira Rivera stood firm in the middle of the crowd while projecting her voice through a loudspeaker. Her words canceled out the morning traffic on Fifth Avenue.

“We stand with all immigrants, we stand with the displaced, we stand with our fathers, mothers and grandparents,” Rivera said. “I am a child, a product of a green card marriage, of two people who came to the United States looking for a new life.”

Rivera’s parents immigrated from the Philippines, where she also grew up. She thanked them for all the opportunities she had in her life including her college degree.

“They gave me the ability to study,” she said. “They gave me the chance to know and to never take for granted that I as a person of color have to work harder, longer and stand when everyone else has gone to bed.”

Rivera said immigrants refugees are suffering because of government initiatives.

“DACA was in place and that’s a portion of the 11 million undocumented,” she said. “This city alone cannot stand without the work of their parents and them themselves. That would be completely impossible from the babysitters, to the people that clean and maintain, the people that are in our offices.”

Rabbi Jose Rolando Matalon, a native of Argentina, spoke to the crowd about his family background. 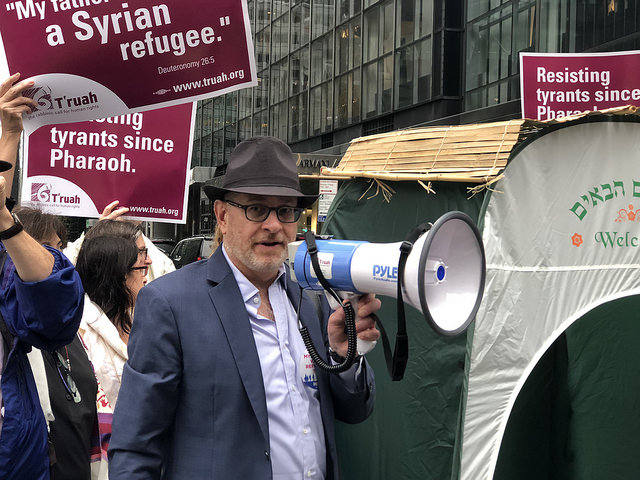 Rabbi Jose Rolando Matalon, a native of Argentina, held up a loudspeaker outside of the Trump Tower this morning to protest the government’s immigration policies. Photo by Monay Robinson

“I am an immigrant from Argentina,” Matalon said. “My grandparents came from Syria with nothing to Argentina and they were given a safe place to grow and to prosper. I would like our country to give the same opportunities to anyone who wants to come.”

Matalon said the administration is disregarding the needs of immigrants and refugees who are searching for prosperity and safety. He has seen a regression in America’s tradition of welcoming and embracing everyone.

“Conditions are getting very difficult for immigrants who live here,” he said. “I believe that this is done to preserve some sort of whiteness in America which has nothing to do with the essence of this country.”

Rabbi Jill Jacobs, 41, is the Executive Director of T’ruah: The Rabbinic Call for Human Rights based in Manhattan, which hosted the protest.

T’ruah has about 2,000 rabbi members across North America who work to advance human rights.

The protest took place during the Jewish holiday of Sukkot, which symbolizes vulnerability.

“The holiday of Sukkot is a holiday in which we put up these fragile structures and effectively live in them for the course of the week,” Jacobs said. “It’s a reminder that no matter how many walls or barriers we might build that’s not what actually keeps us safe.”

During the protest, rabbis built a pop-up sukkah, which was placed in the middle of the crowd and carried along Fifth Avenue as protesters marched. The sukkah was a green and white temporary structure which read “Welcome” above the entrance.

“The sukkah is open,” she said. “It’s a place that we welcome people and those themes are diametrically opposed to the current administration’s policy on immigrants which is to close the borders of America.”

Jacobs’ family came to the United States at the beginning of the 20th century from Poland and Ukraine.