Racial divide deepen after days of grief and anger

Just when I thought things couldn’t get any worse, they did.

In the early morning hours of May 29, CNN reporter Omar Jiménez was arrested by Minnesota state police on live television. Jiménez was calm and asked the officers what they wanted him and his crew to do, but they did not respond and instead handcuffed and arrested him.

“What am I under arrest for?” Jiménez asked as he was being turned away from the camera’s view and being escorted by police to what the viewer assumed would be jail.  The cameraman, Leonel Mendez,  continued to film Jimenez as he was perp walked until he fell out of view.

A black reporter being arrested on live TV while covering the protests in reaction to police killing yet another black man—during a pandemic that is disproportionately affecting black Americans—has filled me and millions of fellow Americans with an overwhelming sense of despair and pain. I feel broken.

I woke up to all of this after a restless night. The president of the United States’ responded to a police officer kneeling on the neck of an unarmed black man, until he stopped breathing, by threatening people who were angered and grieving another senseless death. 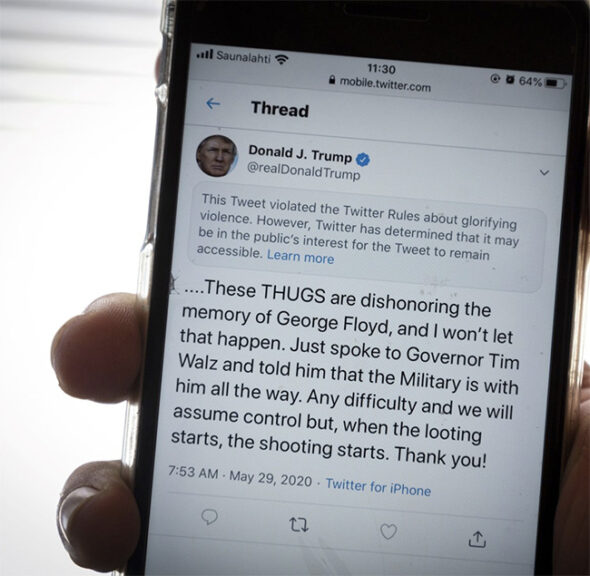 It’s a decades-old law-and-order phrase that has been given new life by Trump.

But make no mistake, this is bigger than one man. It’s bigger than one year. Bigger than one election. This problem has been 400 years in the making, festering throughout American society even as “black faces in high places”—as the Princeton Philosopher Cornel West eloquently put it—seemed to signal a new beginning for this country.

It was all a facade. Some of us knew that then, but more are suddenly coming to grips with this uncomfortable reality.

My only option, though, like many generations of black Americans before me, is to somehow, someway find a morsel of hope to continue. This is a sad maxim of being black in this country, but it’s also a survival mechanism.

If we lose this sense of hope, no matter how fleeting it may feel at times, then what else is there for me to continue for? I’ve promised to keep myself from thinking about the answer to this question for too long.

Instead, I’m trying, though sometimes failing, to find things that bring me hope for a better future. And don’t get it twisted, this is not a naiveté or blind hope. It is a feeling that is sowed by the diversity and youth of the protesters across the country.

From Dallas to Brooklyn, Minneapolis to Atlanta, Los Angeles to Washington D.C., an overwhelming number of those protesting are millennials or younger. These protesters are black, brown, white, Latinx, Asian and the like. They are straight, gay, trans, non-conforming and non-binary. Simply put, these protesters come from all walks of life—informed by intrinsically different lived experiences.

The one thing that unites these people, however, is a shared sense of outrage over a society that has been broken for far too long. Quite literally pushing up their bodies against a system and society that was never built for them. The levels of empathy exhibited by those protesters among my generation is inspiring, and it provides me with the hope to continue.

And it is precisely this hope that will prevent this wicked society from breaking me, no matter how broken I currently feel.