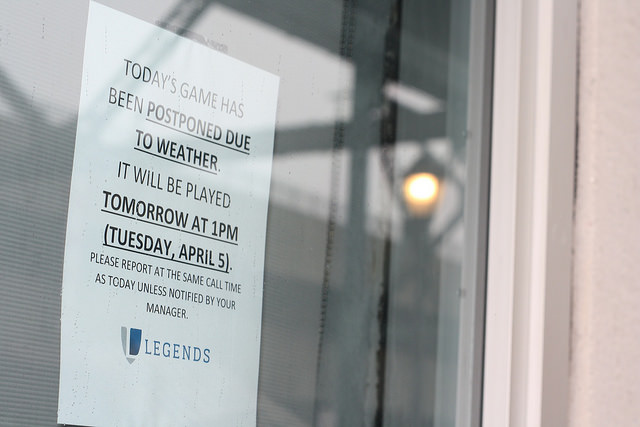 Thousands of people should have milled about, buying concessions or taking quick restroom breaks; the stadium should have been filled with the cheers of passionate baseball fans; the New York Yankees should have held their first game of the 2016 season yesterday.

Instead, the field at Yankee Stadium in the South Bronx, grew soggier by the hour as unrelenting cold rain poured on the city, driving organizers to postpone the game and leaving fans to forge their own entertainment.

Alex Jennings came to New York from Philadelphia with two friends. It was a spontaneous trip, planned after they got free tickets. Although they knew the weather looked “iffy,” when the game hadn’t been cancelled before they left Monday morning they decided to go ahead with the trip.

The three men were on the train into the city when they heard the news: the game had been postponed.

“We figured since we’re already on the train we’d make an afternoon of it, have lunch, come up to the stadium,” Jennings said. “We’d never been up here.”

When Jennings reached the city he couldn’t help but wonder why the game had been cancelled for weather that did not seem, to him, too forbidding.

“It doesn’t seem that bad to be cancelling the game,” Jennings said. “I thought New Yorkers were a little tougher than that.”

The temperatures Monday dipped as low as the mid-30s, and the rain, while never a brutal downpour, was consistent and heavy.

After spending the afternoon wandering the rain-soaked Bronx streets and eating at the Hard Rock Café at the stadium, Jennings and his friends needed to catch a train home. They were perplexed, though, about what to do with their tickets.

Unable to leave them at the stadium office for a friend to pick up later or to return to the city Tuesday for the makeup game, they resigned themselves to taking the tickets home and letting them go unused.

“I don’t know what to do with four good tickets,” Jennings said. “I feel bad, I don’t want to sell them because I got them for free, so I wanted to pay it forward and give them to someone else.”

Alec Olson from Albany, Oregon was visiting his sister at Mercy College in Dobbs Ferry, New York, when he and his father decided to catch a game at Yankee Stadium.

They bought their tickets Sunday night and woke up Monday morning to find the game had been postponed. Worse, they were scheduled to head back home early Tuesday morning, ruining their hopes of watching the postponed game.

Olson, who said he played baseball while growing up in Oregon, did not understand why the game had been cancelled so far in advance (the announcement was posted on the team’s Twitter account before 9 a.m. Monday).

Olson’s father, Derek Olson, added that, while he’s not a fan of the Yankees himself, he has a friend who is a big Yankees fan. He had hoped to buy a souvenir for the friend and was disappointed not to be able to do so.

“It would have been nice to go in and get a souvenir cup, but that’s OK I guess,” he said. “We’re kind of stuck not getting to watch the game.”

The Olsons, like Jennings and his friends, were trying to make the best of the day despite having their plans go awry.

“Now we’re just cruising around the Bronx and cruising around the rest of the city just checking it out,” Alec Olson said. “[We’re] just a little upset that we couldn’t watch the Yankees on Opening Day here in New York. It kind of threw a huge wrench into our gears today.”

Derek Olson said he wasn’t sure how to get his money back for the missed game.

“We got our tickets through a resale site,” he said, “so we’re not even able to get a refund.”