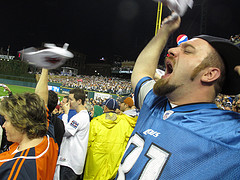 Something eerie is happening in Detroit. Like an old Twilight Zone episode in which cosmic forces abruptly bring about an alternate reality, the Motor City has had the vibe, in recent weeks, of a “parallel universe,” as one local journalist described the curiosity. The sports writer, Drew Sharp of the Detroit Free Press, characterized this “bizarre” phenomenon in the following fashion:

“It’s actually safe to call yourself a Lions fan,” he wrote, “without looking over your shoulder for the men in white coats carrying a straitjacket.”

Sharp was referring, in satirical terms, to the city’s pro football franchise, long an NFL doormat and national laughingstock, whose sudden burst of winning has shot ripples of excitement throughout greater Detroit. With five straight victories to start the 2011 season, this ordinarily woeful squad – that last made the playoffs in 1999 and has compiled an anemic 39-121 record in the past decade – is now a sizzling topic of conversation among sports fans nationally. And with the city’s baseball team, the Tigers, having penetrated deep into this year’s playoffs before being eliminated by the Texas Rangers Saturday, the collective mood here – in a city where optimism can be at a premium – is high.

“There’s a real buzz going on in the city,” said Jeffrey “Stu” Stewart, 31, sitting in box seats along the right field line of packed Comerica Park, the Tigers’ home stadium, during Game 5 of the American League Championship Series. Wearing a Tigers baseball cap and a Lions jersey, Stewart, from the suburb of Redford Township, Michigan, said he planned to “paint my face like a clown” for Sunday’s Lions-49ers game at adjacent Ford Field.

Outside the ballpark, Shawn Crawford, 28, wearing a dark blue Tigers’ cap identical to Stewart’s, said that the Lions’ and Tigers’ success is “bringing people together.”

“Even though it’s a down time in the city, the city’s very resilient and it’s gonna fight back,” said Crawford, a delivery truck driver who lives in Detroit. “Winning helps cure everything.”

Sports’ power to unite a racially fractured society around a common cause, and to bring joy to the masses during times of distress, is no mysterious notion. But perhaps nowhere has that emotional healing power been more vital than in Detroit, whose ills – unemployment, crime, illiteracy, racial segregation – are well-known.

Charles Pugh, Detroit’s City Council President, said that sports have historically been one of the lone “shining spots” for a city that’s been “in the doldrums.”

“[In a city] where sometimes things get pretty bad,” said Pugh, “Sports may be your only solace, may be the only source of joy.”

Over the past half-century, both the Lions and the city in which they’re beloved have chugged down similar tracks – although over time, both sets of rails have become increasingly rusty, broken, cliff-bound.

In the early to mid-1950’s, when Detroit’s car industry boomed and its population of nearly two million ranked it fifth biggest among America’s metropolises, the Lions were in the midst of a golden era, capturing three NFL Championships in six years. The Lions’ last NFL Championship, in 1957, came a year before a recession rocked Detroit, hitting its auto industry especially hard. The 1960s saw race riots and a white exodus from city to suburbs, just as the Lions were experiencing one of professional sports’ most prolific droughts, making just one playoff experience in a 24-year span.

By the 2000’s, Detroit’s woes, and the Lions’ misfortunes, had made the Motor City a go-to punch line for late night comics; a Conan O’Brien or Jay Leno could reliably follow any dud of a joke with a crack about the Lions or about crime in Detroit, and quickly re-claim the audience’s affection. (like when O’Brien named Detroit the globe’s fourth worst vacation destination). But the realities weren’t as humorous: illiteracy rates hovering around 50%, record levels of crime and school dropouts, entire neighborhoods becoming the scenes of chilling post-apocalyptic-looking abandon.

In 2008, the year that the Lions became the NFL’s first ever team to go 0-16, the city’s mayor, Kwame Kirkpatrick, left office in disgrace amidst a string of scandals and felony charges, including for perjury and obstruction of justice. He ended up in jail.

But the Lions’ sudden winning ways, said Pugh, have contributed immensely to the city’s collective psyche, not to mention the “residual capital,” such as an economic jolt, and positive media coverage that has aided Detroit’s image nationally.

Still, Andy Markovits, a Professor of Sociology and Political Science at the University of Michigan, who has written a book on sports’ effects on politics and culture, cautioned against over-valuing these teams’ impact on the community.

“If you wonder what the effects are in terms of long term structural [impact], they’re probably zero or minimal,” said Markovits, adding that positive news surrounding Detroit’s car industry is a much more significant development. Any long-term economic impact, added the professor, is similarly “very hard to assess and very dubious.”

But that isn’t to say sports aren’t influential, Markovits stressed. Sports, he said, can provide a temporary yet “unbelievable sense of collective euphoria.”

“This is a wonderful high [for Detroit],” said Markovits, “and that’s important in life.”

About 600 miles away, in a bar on Manhattan’s East Side, such euphoria was being shared among self-proclaimed Detroit “ex-pats,” who scrunched themselves into long, narrow “Tammany Hall” tavern for the Lions’ first Monday Night Football appearance in a decade.

“Detroit Lions fans love their team and have endured years of torment,” read a website promoting the event, entitled ‘From Motown to Midtown.’

Forming a sea of Honolulu blue, the Lions’ official color, the faithful wore shirts like “Made in Detroit” and “Motor City Pride.” They sang a Detroit Lions fight song after touchdowns, and expressed – whether they’d been raised in Detroit’s suburbs or within its city limits – an intense pride in their hometown.

Standing near the bar was Justin Stewart, 29, who works for a real estate company and lives in Manhattan’s West Village.

“I have to be up at 6 am tomorrow, but I don’t care,” said Stewart, wearing a Tigers’ cap and a t-shirt with multiple blurry ‘Detroits’ on it, as if his attire had been designed by an eye doctor. Stewart is from Bloomfield Hills outside Detroit, one of America’s most affluent suburbs, a place where giant mansions soar above bright green lawns. He said he’s been recruiting friends to move back to Detroit with him within the next several years. Increased excitement surrounding the Lions and Tigers, he maintained, has strengthened his sales pitch.

“What better place to be [than this]?” said Neil Steinkamp, 34, wearing a dark suit with a backwards Detroit Tigers cap. Steinkamp, a financial consultant who grew up in the Detroit suburb of Birmingham and lives on Manhattan’s Upper West Side, had driven to the bar directly from LaGuardia Airport, where he’d just flown in from a business trip.

“I think this brings people together,” said Steinkamp, as the Lions closed in on an impressive 24-13 win over the Chicago Bears. “It gives the city something to rally around.”

Back in Detroit, on the city’s West Side, in a neighborhood where rotting, boarded up homes outnumber healthy ones at least two to one, Juan Scott, 54, hobbled out of a house and onto his front porch, a cane supporting his weight. He said that he’s been out of work “because of an accident”, was once a chef, and, that he’s always been a Lions and Tigers fan. 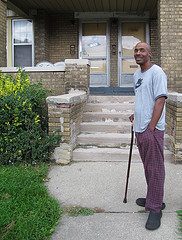 Juan Scott, 54, stands outside of his home in West Detroit, on a block dominated by abandoned houses. Scott, who is out of work, is a long-time Lions and Tigers fan. Photo by Louie Lazar.

“When sports around here aren’t looking good, there’s a lot of trouble,” said Scott, a Detroit native. “But as far as the [Lions] looking up, everybody seems to have a different attitude about things.”

It was late afternoon, and filtered rays of sunlight illuminated peeling paint on nearby houses. Gusts of wind rustled through weed fields growing on front lawns; overgrown tree branches scratched against broken house windows. The block was empty of people, except for two young boys down the street, who tossed around a mini-football.

Asked whether he thinks the Lions’ success is making a difference in people’s lives here, Scott formed a slight smile.

“Yeah, you can tell the difference,” he said, shifting his cane from one hand to another. “There’s a buzz in the air.”