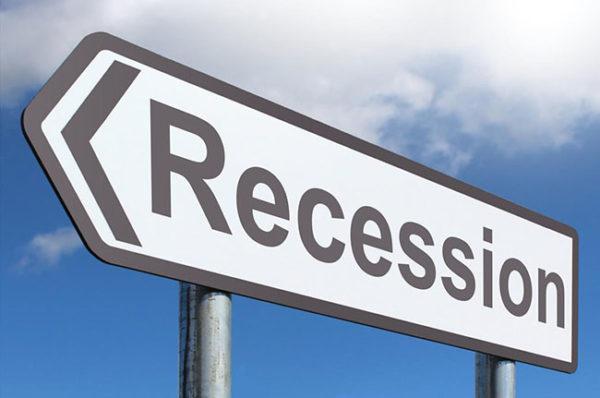 Heightened economic uncertainty and expert predictions of another recession evoke images of bankers and stockbrokers in New York City carrying the contents of their desks despondently down Wall Street during the economic collapse of 2008.

For Sioux Falls, South Dakota resident Amy Wentworth, reports of a future recession remind her of the most painful lessons of that year.

Rumors of a recession have been swirling since the 10-year anniversary of the Lehman Brothers collapse at the end of September. On Dec. 4 the stock market fell close to 800 points, erasing gains it made following a 500-point drop in November. General Motors announced in late November that it was closing several plants across the country and reducing employees, prompting Washington Post journalists to ask President Donald Trump about fears of an economic downturn (full transcript here).

“So I’m doing deals and I’m not being accommodated by the Fed,” Trump said in response, minimizing worries and placing blame on the Federal Reserve. “They’re making a mistake because I have a gut and my gut tells me more sometimes than anybody else’s brain can ever tell me.”

Despite worries and rumors, the reality may not be as dramatic as 2008. Brad McMillan, an investment officer at Commonwealth Financial Network and frequent contributor to Forbes and other outlets, described the cyclical nature of the economy that has led economists to predict a recession could occur as soon as 2020.

“What most people think of when they think of a recession is not just an economic slowdown, but also stock markets going wild,” McMillan said. “And in fact, they often do go in tandem but they are very different things. And you can see that, for example, in 2000 and 2008, we actually saw a pretty similar overall stock market declines, but the economic downturn was much milder in 2000.”

When looking at the technical details that may not concern the average American, experts like McMillan don’t believe any impending shift in the economy would cause similar damage.

“A recession means the economy slows down,” he said. “It’s normal. It’s like catching a cold. It’s going to happen occasionally. It’s going to slow you down; it’s not going to feel good, but sooner, rather than later, you’ll feel better again.”

But the average American isn’t ready to be so trusting. There’s a lot on the line for people who still remember their homes being foreclosed. Last time a recession hit, people across the country lost their livelihood and homes. Since 2008, industry has largely recovered, but regular Americans have not returned to their pre-crisis wealth. Wentworth, who works at Avera Health as a Integration Engineer, is paying close attention to economic news because certain reports make her wary of the future.

An unstable stock market can indicate overall economic decline, but according to McMillan it’s not one of the substantive indicators. He said those indicators could include employment growth falling below two million people a year, consumer confidence dropping by 20 points or more over the course of a year, business growth moving from expansion to contraction and long-term interest rates becoming higher than short-term interest rates.

Mark Gertler, a professor of economics specializing in business cycles and monetary policy at New York University, said that the tax cut and increasing deficit makes a ‘fiscal crisis’ more likely and pointed to three additional factors that could contribute to an overall slowdown of economic growth that could result in a recession.

“There will have to be some kind of adjustment — either taxes will have to increase or government expenditures will have to fall,” said Gertler. “This will put downward pressure on output growth. We also have tariffs in place and a possible extension of the trade war. That could reduce export demands. That would put downward pressure on GDP growth. The last factor is because the economy has been growing so strongly we could have increased inflation, which will force the Fed to increase interest rate and that would be another factor sort of pushing GDP growth down.”

While there are factors to keep an eye on, Gertler said that there does not appear to be immediate cause for concern.

“I mean we’re not sure that we are going to have a recession,” he said. “It’s likely we’ll have a slowdown in GDP growth, but it’s not clear that we’ll have an actual contraction.”

McMillan has written, both on his blog The Independent Market Observer and for Forbes, that a recession is likely in the near future. None of the indicators are in effect at the end of 2018, signaling a downturn won’t happen until 2020. Although, he is hesitant to put a timeline to the economy because things change quickly.

Wentworth and her family have been taking reports like McMillan’s seriously, so they will not be surprised by another recession – but there’s no sure way for them to prepare for it.

With so much attention on the state of the economy, the administration has avenues to contain potential damage.

“I’m not in control. If I were, I would take the tariffs off and reduce the trade uncertainty,” Gertler said. “I would have also announced new plans to reverse some of the tax cuts so that instead of having to have an extreme adjustment to the big budget deficit we kind of smooth that out over time. And I would let the Federal Reserve do what it has to to keep inflation under control.”

“There are other things that could buy us some more time,” McMillan said. “For example, if the administration cut a deal to do an infrastructure plan that could certainly buy us another year or two of expansion, depending on the magnitude.”

Following the 2018 midterm elections, both President Trump and Senate Majority Leader Mitch McConnell indicated that they could consider working with likely Democratic Speaker of the House Nancy Pelosi on an infrastructure bill.

“Any administration depends to some extent on economic success,” McMillan said, “and there have been policy actions in the past year, you know the tax cut and the additional government spending, that will have helped growth in the short term. That may indeed buy us another year. That might take us to the election, I think that’s probably getting a little bit iffy, but it’s certainly possible.”