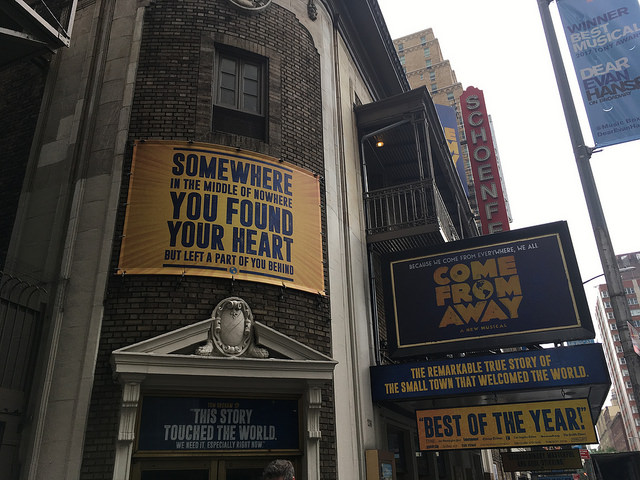 The Broadway show “Come From Away” tells a heartfelt 9/11 story. Today was the first in its two year run that a show has been held on 9/11. Photo by Kerry Breen

In the rush line for the hit musical “Come From Away,” the impact of the 17th anniversary of Sept. 11 looms large in the minds of those hoping to get low-price, last-minute tickets to the evening’s show.

“Come From Away” tells the story of passengers on flights that were diverted to an isolated town in Newfoundland, Canada, when United States airspace was closed. Taking place on and in the immediate aftermath of Sept. 11, 2001, and showing the bonds between the stranded passengers and the locals who took them in, the musical has received accolades for its message of connection and positivity in the face of tragedy.

“You can’t help but see the best in humanity throughout the performance,” said Beverly Bass, a pilot who was flying from Paris to Texas for American Airlines on 9/11 and was among those diverted, over email.

Her story is featured in the show, where she is played by actress Jennifer Colella. Bass has seen the show over 100 times.

“By the end of the musical, everyone is smiling again, and it helps you realize that something very beautiful did come out of a very tragic event in our history.”

While the show has been open for almost two years, this is their first performance on the anniversary of 9/11, according to box office employee Brad Bussdieker. There were over two dozen people in the rush line, and many hopeful attendees, including New Yorkers and tourists from around the country and the world, said that the anniversary influenced their decision to attempt to see the show that evening.

“The day was a blur,” said Avi Soroka, 37, a New Yorker who was a student at Yeshiva University in Washington Heights at the time of the attacks. “It was sort of like your brain processing things as they were happening, or letting your brain process things in between fits of crying and hysterics and sort of not understanding what was going on.”

Soroka has already seen “Come From Away” twice, and was successful in getting a seat for tonight’s performance.

“Fortunately, I never lost anyone, but I feel like we all lost something on that day,” Soroka continued. “I’m a theater person. I felt this would be the best way to mourn. It’s a very communal way of mourning, and the message of the show is hope on a very dark and tragic day. So, instead of sitting in my office and being sad all day, I figured I’d come here.”

Also waiting to try to get tickets to the show were Chris and Emily Brown from California. Chris Brown, a firefighter, said that he remembers going to work at a local firehouse that day and watching news coverage of the attacks.

Others in line said that while seeing the show on the anniversary of Sept. 11 was mostly a coincidence, it was something that they were aware of. One such couple included Carson and Barb Landis, a couple from Illinois who visited the 9/11 memorial yesterday.

Some of those waiting in line were tourists whose trips happened to overlap with the anniversary of the 11th, and had not deliberately scheduled their trips to see the show on that day. However, the significance was still in their minds.

“I thought about today being the anniversary,” said Vincent Gillieron, a 28-year-old from Paris, France, who remembers being in school in Switzerland when he heard the news. He gestured towards one of the many billboards hanging around the Gerald Schoenfeld Theatre, broadcasting reviews of the show. “I saw (the sign saying) ‘The best of humankind,’ and I want to see that today.”