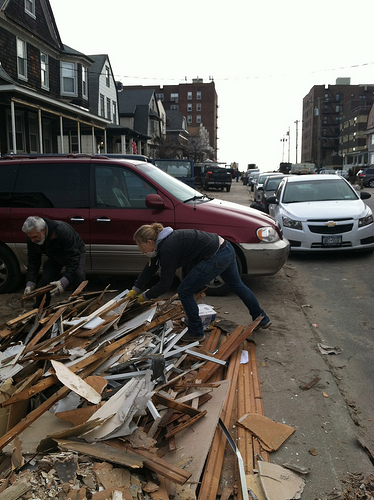 Vincent Fusco, 69, pictured left, cleaning debris from his home on Beach 119th Street. Less than 100 yards from the Atlantic Ocean, the basement had eight feet of water and the home suffered some damage to the foundation during Hurricane Sandy. Photo by Timothy Weisberg.

The water came rushing into Vincent Fusco’s home in Rockaway Beach from what appeared to be out of nowhere. The basement was flooded with eight feet of water, the white caps smashed against his front porch and quickly rose to the first story of his multi-family home on Beach 119th Street.

Fusco said he did not know how high the water was going to rise.

“The cat started swimming in the foyer,” he said. “That’s how deep it was.”

His family and the cat survived, but the furniture, stove, washer and dryer, and fresh Kentucky bluegrass sod on his front lawn were all but destroyed when Hurricane Sandy made landfall Oct. 29 in New Jersey and New York.

As a barrier island, the Rockaways peninsula was a vulnerable area that received the brunt of the hurricane’s wrath. The storm uprooted trees, knocked down power lines, flooded basements and even ripped some beachfront homes off their foundation.

Like Fusco, many residents of hard hit areas of the Rockaways–Breezy Point, Rockaway Beach, Belle Harbor, Rockaway Park and Far Rockaway found an inspection tag from the Department of Buildings affixed to their front door when they returned to their homes after the storm. A green tag meant the home was stable and suffered no structural damage; a yellow tag indicated restricted access due to structural damage; and a red tag determined the house unsafe and unsalvageable. These homeowners are now in limbo. There is no timetable for razing their homes or if there will be any financial assistance to do it. They are not even sure how much it will cost. Although Fusco found a green tag in front of his home, many other residents were not as lucky.

Two hundred homes in the Rockaways alone were classified as beyond repair, and about 500 others with significant structural damage were inspected to determine whether the properties needed to be razed. However, a red tag does not necessarily mean the building will be demolished, according to the Department of Buildings 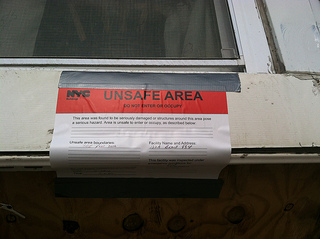 A Department of Buildings tag on a home in Rockaway Beach, Queens. The home was deemed beyond repair and will eventually be razed by the city. Photo by Timothy Weisberg.

Although the tags restrict use of the building, buildings and homes would not be bulldozed without notifying the owner unless it was in danger of collapsing.

The New York Department of Buildings has inspected close to 80,000 buildings that lay in shambles in Staten Island, Brooklyn and Queens, as part of a systematic effort to assess overall damage to properties in the hardest hit areas of the city.

Calls to the Department of Buildings seeking comment were not returned, and emails to councilman Eric Ulrich–who represents Breezy Point–and his chief of staff, Rudy Giuliani, were also not returned.

Fusco, 69, recently stood outside examining the pile of gutted drywall and insulation, he faced the inevitable: a prolonged recovery for a home that still suffered extensive flooding damage.

“Bring back Irene,” he joked. “We had Irene last year but this was ten times (worse),” he said.

However, Frusco added that the inspection was done weeks ago, and is worried a second inspection will find foundation damage he discovered in his kitchen and living room.

William Polis, also of Rockaway Beach, Queens, was not so lucky. He came home one day to find a yellow tag affixed to the door of his home on Beach 115th Street.

“I came home from work and saw the tag on the door and thought, ‘What the heck is this?’” he said. 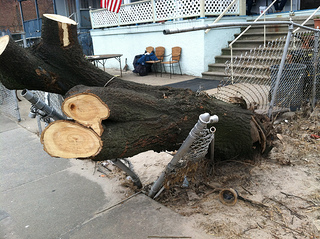 Remnants of a tree that was uprooted during Hurricane Sandy at the home of William Polis on Beach 115th Street in Rockaway Beach, Queens. Polis, 55, is still without heat and his home was without power for almost a month. Photo by Timothy Weisberg

While still without heat, Polis was not worried about the inspection notice and the possibility of restricted access to his home, and was upset that the Department of Buildings was recommending what repairs were needed.

“We’ll recover. I have repairmen,” he added.

Although power has been restored to 1.1 million customers, 9,442 customers are still without power in the Rockaways, according to a Nov. 26 release from the office of the mayor on recovery and assistance operations. Mayor Michael R. Bloomberg also announced on Nov. 26 a measure requiring owners and landlords of multi-family homes to immediately take action to restore heat and electricity. The release added that owners and landlords who, “…fail to restore essential services to their buildings will be subject to the commencement of enforcement proceedings.”

“It’s an owner’s legal obligation to provide their tenants with essential services such as electricity and heat,” the Housing Preservation and Development Commissioner Matthew M. Wambua said in the release.

Further exacerbating recovery efforts is the requirement by the city for houses to be checked for flood damage before the Long Island Power Authority (LIPA) , can begin to restore power to homes in the Rockaways and the southern shore of Long Island. LIPA has already been highly criticized for its slow response to Hurricane Sandy, leading to the resignation of the chairman Howard E. Steinberg, on Nov. 30 and prompting a response from Gov. Andrew M. Cuomo for a complete overhaul of the third largest electric utility service in the nation.

And over one month after the storm, thousands of people still remained displaced and looking for answers. Restoration centers like St. Francis De Sales Parish church in Belle Harbor, Rockaways, are still in full force, providing clothing, food, lawyers to handle insurance claims, and representatives from LIPA and the Federal Emergency Management Agency (FEMA).

According to Rev. John Brown, the pastor of St. Francis De Sales Parish and director of the restoration center, what started as a clothing and food drive with 20 rolling beds turned into a designated restoration center that served 4,000 to 10,000 residents at the peak of recovery efforts. Now that number is down to approximately 1,000, he said.

“We became the command post of the (Rockaways) peninsula,” he added.

Rev. Brown empathizes with residents, having suffered structural damage and severe flooding in his home across the street from the church, which is one of many buildings in Belle Harbor still without heat or power. He is currently residing in Ozone Park, Queens.

“I think they’re doing the best they can with what they have,” he said of FEMA, mayor Bloomberg and representatives for respective Rockaways neighborhoods. “It’s a lot of people hurting. It’s going to take time.”

Yet amidst the destruction, Rev. Brown remains confident the Rockaways will reestablish itself.

“This is a very healthy community. They all take care of each other and work very hard,” he added. “I have no doubts that we’ll come back.”

But for Fusco, the second major storm to hit the peninsula in as many years has him questioning whether he should keep his house, which is less than 100 yards from the Atlantic Ocean.

“We really don’t have much stuff left,” he said. “Whether or not we are going to stay here I don’t know.”