Running away from homelessness 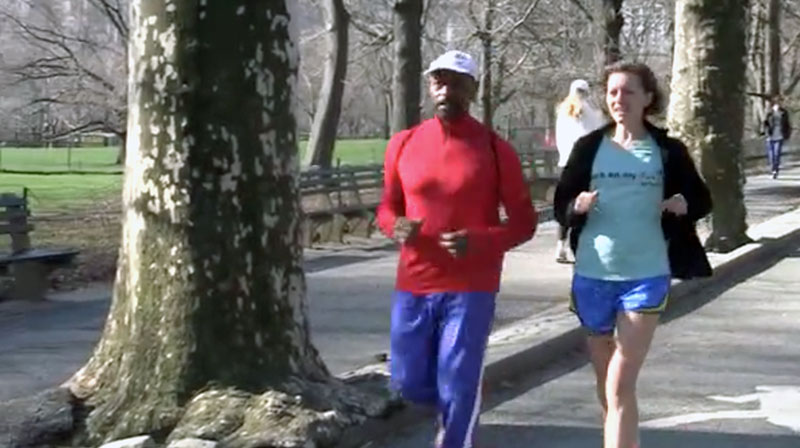 Back on my Feet volunteers use running to help the homeless build their lives back.

On a warm Saturday morning, a group of men and women gather in Central Park to go for a run. There are crowds of joggers hitting the pavement that day, but one thing sets this group of runners apart. Most of these men and women are homeless, and they aren’t just running for the exercise. For them, running is their way out of homelessness.

These runners are members of Back on My Feet, a non-profit that uses running to helping homeless transition into employment and independent living. Working with shelters across 11 states, including New York, Back on My Feet volunteers run with homeless every Monday, Wednesday, Friday, and Saturday in the city.

“There’s a lot of competitive and fun running teams in New York, but this one has an added element of outreach that just hooks you,” said Jean Hartig, Back on My Feet’s Director of Communications. Hartig has been with Back on My Feet’s New York chapter since it started two years ago.

BACK ON MY FEET from Pavement Pieces on Vimeo.

Originally launched in Philadelphia, Back on My Feet began when founder Anne Mahlum, who would run by a local shelter every morning, realized she wanted to communicate and help homeless in the shelter instead of passing them by every morning, said Jean. For this reason, Mahlum pushed to get a non-profit started that would allow her to continue running like she did every morning, but to turn the activity into one that benefits homeless as well.
Jerry Rahming, 60 from East Harlem, has been with the program’s New York chapter since its start. Rahming was homeless and living in a shelter when he was introduced to Back on My Feet during an orientation meeting the program held at the shelter. Rahming said he had always been active until he became homeless, and so he thought the program might be a good way to start exercising again.

But once he started, he realized the benefits were more than just physical, he said. Running also helped him to build endurance, discipline, and motivation-skills that are crucial to changing your life.

“I equate it with the jungle, because animals are always running,” he said. “It’s about running to stay on your feet until you either survive through catching prey or by not being caught by predators and so I equate what you need for running-the endurance and the motivation-in a very real sense with how I look at my life now.”

Rahming also participated in last year’s New York City Marathon and the experience has given him a newfound confidence.

“I completed it at 60-years-old and I realized that if I can do that, there are other things I can do as well,” said Rahming.

Paul Persichetti, 40, of the Upper East Side. Persichetti had never been active before he joined Back on My Feet in February. He weighed 290 pounds and was homesless but by running, he has been able to improve both his physical and emotional wellbeing.

“This has been a great way for me to become active, to keep the weight off, and to finally be happy,” Persichetti said.

And these health benefits have been crucial to helping Persichetti, who is currently back in school, stay focused.

“We get up early, and it gives me so much more energy to be able to go to school and get through the day,” Persichetti said.

Since starting at Back on My Feet, Persichetti, who never ran, has already run a total of 80 miles in three months, and he plans to run in this year’s New York City Marathon.

So far, the organization has served 200 residential members who currently receiving housing through the program and since launching, 74 of these members are now employed and 72 have moved into independent living.

For Hartig, Back on My Feet provides a refreshing change from the typical shelters and transitional housing programs meant to assist homeless.

“Being able to create a community outside of the normal realm of thinking of shelters and programs is really helpful for some of our members who have been living in rigid institutional margins for more than 60 years,” said Hartig. “To be able to have an activity that allows them to get a little goofy is a huge value ad for our members, and it’s addictive to see how supportive these men and women are to each other.”

This has been the case for Rahming, who said that the program has helped him open up to people for the first time in years.

“Before I joined, I was more of a recluse, but Back on My Feet has pulled me away from myself and brought me in contact with others,” said Rahming. “It’s made me feel that I can rely and trust in people again.”

Back on My Feet • homeless • non-profit • running