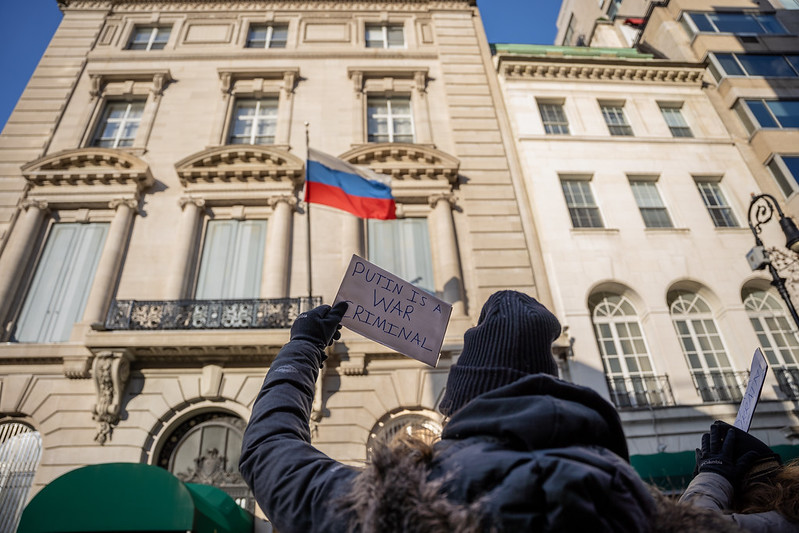 Protestor holds a sign that reads “Putin Is a War Criminal” outside the General Consulate of Russia at a rally opposing their government and the invasion of Ukraine. February 26, 2022. Photo by Nathan Morris

On a chilly Friday night, chants of “F*** Putin” echoed in Times Square. Blue and yellow flags waved in the wind and signs held aloft as demonstrators, including many Ukrainians, protested Russia’s invasion. Standing slightly apart from the crowd with a sign that read “Russians Against War” was Russia native Anna Savinova, a student at Parsons.

“This is pretty emotional for me,” Savinova said. “Yesterday was heartbreaking because I was walking on the street, and I overheard people blaming Russians for this. I just want people toknow that so many Russians are against this war and are standing with Ukraine.” Savinova has Ukrainian friends and said that this cannot divide them because they are like family; they are both Slavic. 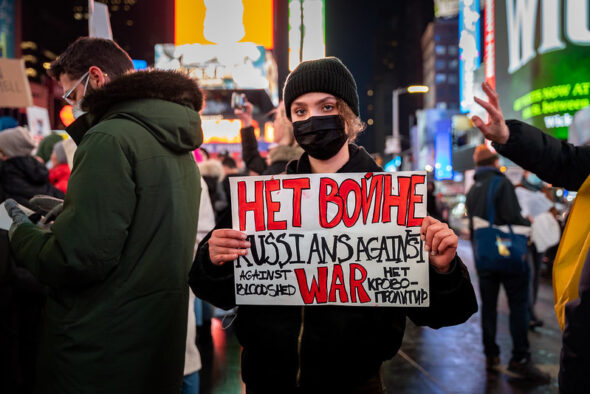 Anna Savinova holds the sign she made for a rally at Times Square. It reads “No War, Russians Against War.” The rally was in support of Ukraine and against Putin and the Russian government. February 25, 2022. Photo by Nathan Morris

Outside the Consulate General of Russia, other Russian protestors also spoke of carrying a weight of shame. Sev Kugushev, 27 of Queens, held a sign that read “Het Boйhe,” meaning “No War” as he stood on East 91st Street and Fifth Avenue.  “I feel ashamed in being Russian, and then I feel ashamed in front of Ukraine because I can’t do anything,” Kugushev said.

Holding a sign that read “Russians Against War and F*** Putin, Go to Hell,” Artem Golovin admits that while protesting might not change Putin’s mind, he continues to do so because he said it’s the only thing he can do. “I am extremely sad about this,” Golovin said. “I don’t see a way of how this will end.”

About 600,000 Russian-Americans live in New York City, especially in Brooklyn’s Brighton Beach neighborhood. It is home to many Russians and Ukrainians, with restaurants and stores that cater to their culture. 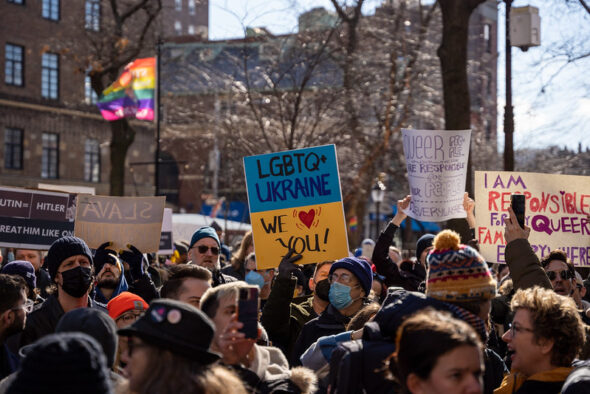 A demonstrator holds a sign that reads “LGBTQ+ Ukraine, We Love You” at the rally to support the LGBTQ+ community in Ukraine. The rally took place outside of the Stonewall Inn. February 26, 2022. Photo by Nathan Morris

In Greenwich Village on Saturday, another demonstration at the Stonewall Inn was organized by members of LGBTQ+ groups from the United States, Ukraine, and Russia. “LGBTQ+ Ukraine, We Love You” signs accompanied pride flags outside of the bar.

Ezra Erikson, 27 of Manhattan, echoed the comments of other Russians, giving an emotional speech about how important it is to not allow for a division between Ukrainians and Russians.

“I never supported Putin,” said Erikson as the crowd applauded. “I never voted for him. But nonetheless I feel responsible because it’s the country I was born in.”

Many Russians explained that they left their home country in search of a better life – safety, happiness, opportunities, and the choice to be their own person.

Sev Krugushev, who lived in Russia until he was 24, came to the U.S. about three years ago. He sought political asylum, and for him, living in Russia was endless days of fear.

“It is really scary to live in Russia, especially ever since they occupied Crimea,” Krugushev said. “If you want problems in Russia, make a sign against Putin and stand outside. Five minutes later you would be facing criminal charges. You’d be lucky if you weren’t beaten.”

Krugushev still has family in Russia and is worried that because of his past vocal opposition to the government, his parents and younger brother might be targeted. His brother turns 17 this month and could be eligible for the draft.

“If you are 17 or 18 and do not go to college, you’re eligible for drafting season into the Russian military. Many of them are in Ukraine right now,” he said.