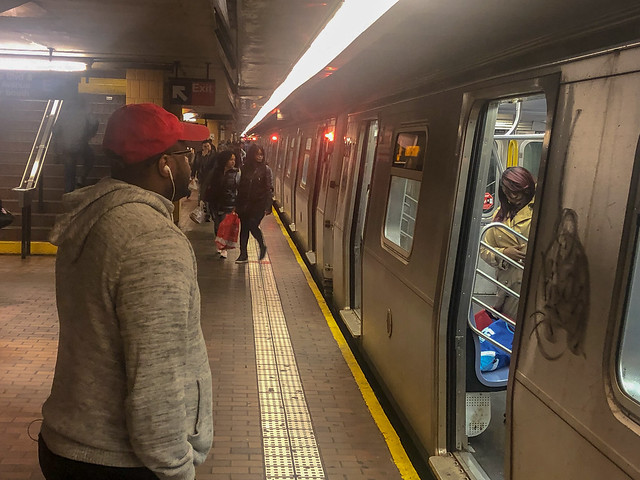 Darryl Kelly waits for the J train to Brooklyn. it is the second leg of his long journey home. Photo by Levar Alonzo.

It was 12:45 a.m. Sunday and Darryl Kelly’s nine-hour shift at a Walgreens in Flushing, Queens had just ended. His backpack was stuffed with his work vest, battery pack and snacks that he will munch on as he makes his way to Crown Heights, Brooklyn. Now, he sat in a McDonald’s a block away peering out the window to watch for his bus to Jamaica Station. If he misses the 1 a.m. Q25, the next one won’t arrive for another 30 minutes—and that’s only the first leg of the journey. From there he must transfer to the J train to Broadway Junction, then take the A train to Nostrand Avenue. When he gets off, he still has a 10-minute walk to his doorstep.

“Honestly, I hate my voyage, I wouldn’t mind working so far from home if I had a reliable transit service to get me home in a timely manner,” Kelly said. “When I finally make it to the J train at Jamaica, I have to take a shuttle bus to the A train, I just be wanting to get home.”

For many New Yorkers who work after the MTA’s peak hours of 5 a.m. to 9 p.m., it’s a hassle to get home. Trains and buses slow down their service, with the former making only local stops and the latter running 30 minutes apart at best.

“When it is so late at nights you have to be precise in all transit decisions you make,” Kelly said. “One false judgment of time and missing your bus or connection could mean another hour of travel or getting home later.”

According to MTA data, ridership is at its lowest from 10 p.m. to 4 a.m. — and that’s when the transit authority uses the time for station and track maintenance.

With the subway system in need of repair, the only way to improve the system is to shut down major portions of it. MTA president Andy Byford has called for a sweeping $40 billion plan to install modern signals on several lines, meaning stations will be closed on most nights and weekends for the next two and a half years.

In light of this, Kelly, who is a manager at Walgreens, said he’s asked his bosses about working closer to home. But he is also at the disposal of his company, and where he is needed is where he has to go.

“I know that not a lot of people ride the trains and buses at night or what MTA officials might consider peak times, but some of us still do,” Kelly said. “We have to get home just like everyone during the day.”

“An Uber or Lyft would cost me like over $30  to get from Queens to Brooklyn,” he added, noting that he lives too far away to take a for-hire vehicle to his doorsteps. “That’s a part of my budget I can’t add as an expense. I’m stuck with the MTA.”

According to the MTA, workers have started to upgrade signals on the Queens Boulevard line from Rockefeller Center in Manhattan to Kew Gardens in Queens. The F train in Brooklyn and the 8th Avenue line in Manhattan are next.

“During station closings on nights and weekends, riders could have other options like extra buses,” said an MTA spokesperson in an email. “Because the system is so large and interconnected, there are often alternate subway lines nearby.”

This is not always the case in far-flung corners of the city.

For straphanger Angie DeJesus, the late-night commute from where she works in Jamaica, Queens to her Lower East Side apartment is already a struggle. She must wait for buses and a train that never arrives on time. DeJesus lives where New Yorkers call her area a transit desert. No trains run close by and limited bus service.

DeJesus 25, who works at a Blink Fitness until close at 11pm,

“I want to move to an area that’s like closer to more shops and trains and like closer to a hub,” DeJesus said. “But that cost money. It’s already expensive in this city, so I live where I can afford too. Just sucks that a city works against the lesser man.”

Joe Cutrufo, a spokesman for the advocacy group Transportation Alternatives, which fights to improve public transit, said the city must provide alternatives to trains if they plan to shut down subway lines for night repairs.

“[One option is to] have dedicated bus lanes whose sole purpose is to bus transit riders from point A to B,” he said. “Especially at nights when there is no traffic, utilize bus services to pick up the slack where subways might be closed of going through repairs.”

She bounced around from workforce programs looking for a job. She took the first one that looked past her record and hired her.

DeJesus, who plead guilty to burglary charges in 2015 and served three years for the crime, said she is very thankful for the job she has. Without late night busses and subways, she’d lose the gig and her sense of independence.

“I know that the entire transit system is old, and they need repairs, but they have to be considerate of everyone riding the trains and all hours of the day,” she said. “This is supposed to be the city that never sleeps right, then our subway shouldn’t sleep either.”