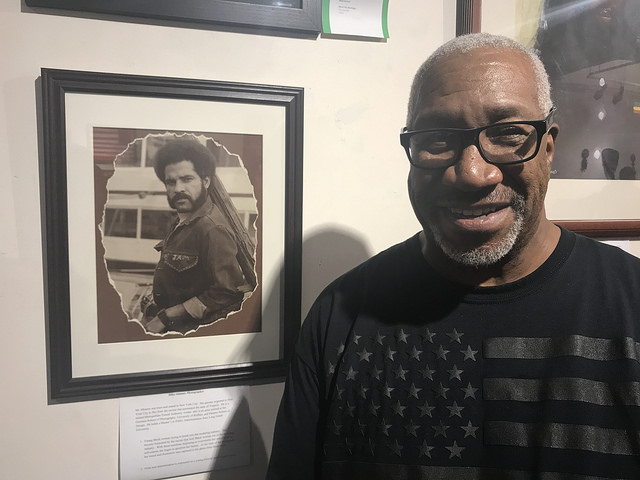 Artist Miles Mims  stands in front of one of  his photographs on exhibit at he Social Justice Art Show at the Jamaica Center for Arts and Learning in Queens. He says his exposure to segregation as a child while traveling with his family in rural Virginia helped shape his current work as a photographer. Photo by Kristen Torres

Miles Mims still remembers the day he was arrested in Virginia for stepping onto a beach marked “whites only.”

“On the black beach, everyone was huddled together, hundreds and hundreds of people on one side of this thin red line,” Mims said. He looked at the floor, drawing a line across his feet with his hands. “The ‘white’ beach — well, it had more space and it was cleaner.”

“I didn’t pay no attention to those things back then,” he said.

“Social injustices — they’re in my fabric of being,” Mims said. “When I look at things now, I do it through that lens. I can’t help it.”

Mims — along with about a dozen other local artists — are currently displaying their work at the Jamaica Center for Arts and Learning in Queens.

It’s the second year that the Social Justice Art Show comes to the eastern borough, and features work from artists focusing on racial discrepancies in the criminal justice system.

Wanda Best is the show’s director and also has artwork featured in the exhibit.

She said the exhibit ran for one night last year, down the street at the King Manor Museum.

“We had over a hundred people show up that night,” Best said.

This year, the show will run for two weeks.

“There’s something powerful about combining art and social issues in this way,” Best said. “People look at these exhibitions and they won’t walk out of here thinking the same way about these things.”

Best worked with Councilman Rory Lancman (D-Hillcrest) to start the exhibit in 2016.

“These issues, these problems, they’re not talked about as much as they should be,” Best said. She pointed at one of her paintings. “This one is about mass incarceration — they’re locking up African Americans way more often than whites or Hispanics.”

“This is our chance to change the way people think about these issues,” Best said.

Pieces in the exhibition include all types of artistic mediums, like woodworking and interactive visual pieces.

Some installations focus on the role of African American women in society, while others call attention to the years of slavery.

Mims has two photos on display in the exhibit — a portrait of a woman and one of a man.

He pointed at the photo of the man.

“That was down in Manhattan, by Seaport,” he said.

Mims said he approached the man because he liked his “look” and asked him if he could take his photo.

“The guy was really upset because he couldn’t get a job and I said ‘having that afro and beard don’t help,’” Mims said. “But he had this look of determination on his face.”

Mims said the man was biracial and spoke to Mims about the struggles of not fitting into a society where a hard line is drawn between being black or white.

“After talking to him, I started to realize some things,” Mims said. “I used to automatically look at the way people treated me and asked myself, ‘is it because I’m black?’ I used to control my behavior to make sure I didn’t do nothing to offend anyone and I would still get hostility.”

“It was hurtful,” Mims said. “But I examined it and started to realize what prejudice was all about. All I can do with my art is express what I have inside me and try to make people who look at it a better person. That’s all I can hope.”

The show runs through September 29th.