The art of photojournalism honored in NoHo 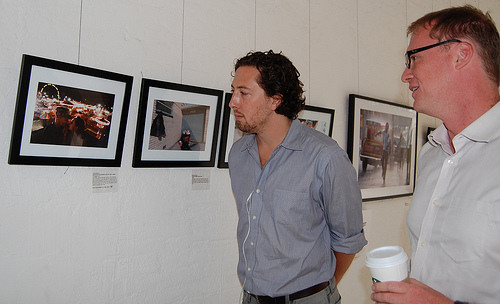 Greg Spielberg and Craig Warga admire a photo of a young couple on a ferris wheel. Photo by Kait Richmond.

Selected as some of the year’s best photojournalism, pictures that captured the major and minor events of last year are on display at the Openhouse Gallery in NoHo, as part of the New York Press Photographers Association’s annual exhibit, The Year in Pictures 2010.

Photojournalist Craig Warga, 36, from Jackson Heights, Queens, looked at a group of pictures taken in Haiti last year, after the earthquake which ravaged the country and reflected on the nature of his profession.

The exhibit showcases the best pictures from 2010, taken by press photographers in the New York Metro area. From 2,000 entries, a panel selected 200 pictures to be shown.

“I think it was a pretty tight contest,” Warga said. “There was big news last year that produced some interesting photojournalism.”

Many of the photos were of the Haitian earthquake. Warga, who works for the New York Daily News, said he was there three months after the earthquake as the country attempted to pick up the pieces and return to normal.

He photographed a cockfight, an assignment he called “brutal,” but captured a significant part of Haiti’s culture, “like a baseball game.” The Haitians, he said, were excited to show off their pastime and gave him a front row seat. His photos from the experience are featured in the exhibit.

While the Year in Pictures has a heavy focus on 2010’s biggest news stories, it also concentrates on life in New York City. Aristide Economopoulos, one of the most featured photojournalists in the show, photographed a cab driver parked next to a tourist bus. The cab is overtaken by the images on the bus of the Statue of Liberty and the American flag.

There are many New York Yankees photos, including one of Derek Jeter excitedly leading the team to the field. Another photo shows New York Mets player Ike Davis upside-down as he goes over a railing trying to catch a foul ball.

A favorite of Openhouse Gallery employee Anna Pankevich, 17, of the Upper West Side, is an elated Phillip Jackson Benson just after he knocked out his opponent at a boxing match at the BB King Blues Club and Grill in Times Square.

“There’s just so much emotion and happiness,” Pankevich said.

The big, white gallery was desolate on yesterday, but Director of Content, Greg Spielberg, 30 of the Lower East Side, said there aren’t a lot of visitors during the week. He said a lot more people will stop in over the weekend, a typical city trend.

Warga said he hopes that the exhibit can raise “a couple thousand” for the Chris Hondros Fund. The NYPPA is collecting donations in honor of Hondros who was killed in April while on assignment in Libya. The money raised will go towards supporting young photojournalists.

Warga knew Hondros and said that his death was a huge blow to the photojournalism community.

“If I had to choose one guy to represent all photojournalists, it would be him,” Warga said.