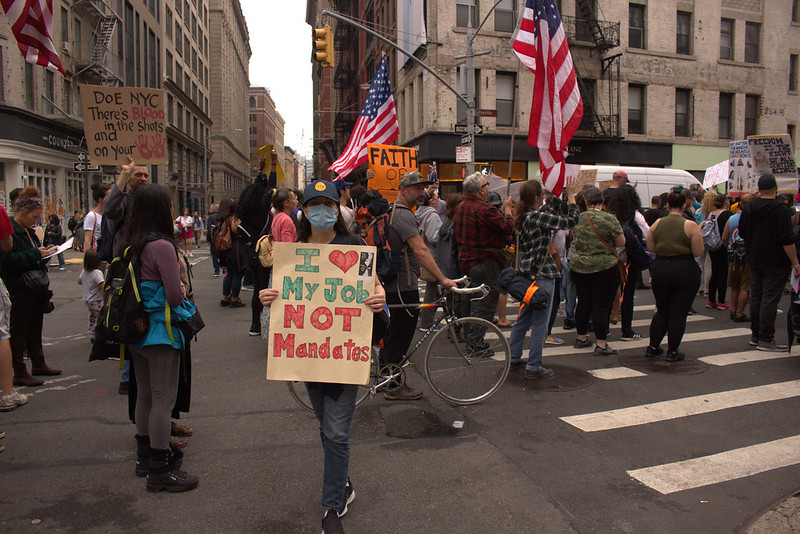 Amongst a sea of protestors chanting, “resist, defy, do not comply,” as they marched across the Brooklyn Bridge yesterday towards City Hall in Manhattan, third grade special education teacher Gina Vasquez hoisted a homemade sign above her head  to the beat of the refrain.

Vasquez joined hundreds who marched as part of New York’s ongoing Freedom Rally, a constellation of organizations in opposition to the vaccine mandate, which requires the Department of Education’s roughly 3,000 remaining unvaccinated teachers to have received at least one dose of the vaccine to remain active employees of the city.

“I love my job. This is so upsetting to me that I’ve dedicated so much of my life – you know, I’m a devoted teacher,” said Vasquez. “Now they’re saying I can’t work unless I get vaccinated.”

Mayor Bill de Blasio estimated that 8,000 of the DOE’s nearly 150,000 school-based employees are out of compliance as of this morning. Vasquez, who teaches at P.S. 372 and has over 20 years of classroom experience, believes she should be able to use her sick and personal days to remain on payroll, since she claims to only use either in extreme circumstances. As of Monday, she’s on unpaid leave.

Early last month, an independent arbitrator ruled that New York City teachers with qualified medical or religious exemptions must either be offered non-classroom assignments, a severance package, or be placed on unpaid leave that continues to provide them healthcare coverage.

“I feel like if we’re practicing all these safety protocols, then the teachers will be fine,” said Vasquez. “It’s the children that are getting Covid, so I feel like it should be up to me. I’d rather get it and develop my own antibodies than have what they call a vaccine.”

By the end of the day Monday, 95% of full time employees had received at least one shot, including 96% of teachers and 99% of principals. Since the mayor’s mandate was announced in August, 43,000 injections have been administered, including 18,000 in the past 10 days. The United Federation of Teachers (U.F.T.) announced on Monday that a 1,000 teachers had been vaccinated over the weekend to remain on the district’s payroll.

While the city claims to have thousands of substitute teachers and paraprofessionals waiting in the wings to supplant employees, many, including the U.F.T., are highly skeptical that the plan in place will adequately address their absence. U.F.T. estimates that two-thirds of public schools could face disruptions resulting from staff shortages.

Garrett Ramirez is a paraprofessional with Energy Tech High School in Queens and a member of the steering committee for Teachers for Choice, an organization in opposition to New York City’s vaccine mandate. With 15 years of experience, Ramirez can understand why some of his peers are capitulating to the city’s mandate, though he would only consider getting vaccinated after clinical trials conclude near the end of 2022 or the beginning of 2023.

“Unfortunately, some teachers are being coerced, some of them are caving in, in order to preserve their jobs and income for their families,” said Ramirez.

With appearances from Founder Michael Kane on outlets such as Fox News and a petition with a running total of 52,000 signatories,Teachers for Choice is bolstering support and digging in their heels. A restraining order was filed yesterday morning in the ongoing Kane vs de Blasio in an effort to stop the vaccine mandate from being implemented.

Kane vs de Blasio, originally filed in federal court on September 21, challenges the Department of Education’s mandate as ‘immoral and illegal.’ The lawsuit claims that the mandate violates fundamental constitutional rights by ‘discriminating on the basis of religion and medical status’ and ‘places unconstitutional conditions of employment.’

Ramirez plans to apply for a medical exemption next, this time seekling to qualify as having natural immunity.

“The science of natural immunity is kind of overwhelming,” said Ramirez, noting a peer-reviewed article from the British Medical Journal and research by Johns Hopkins surgical oncologist Dr. Marty Makary as evidence. “I have recovered from Covid-19, I’ve tested positive for antibodies twice. Antibodies are only the tip of the iceberg as far as natural immunity goes.”

While much is still unknown about the durability of either vaccine or natural immunity, a study released in August from CDC found that vaccination offers higher protection than previous Covid-19 infection, noting that the unvaccinated have 2.34 times the odds of reinfection as the vaccinated. Dr. Makary’s colleague, the infectious disease expert Dr. Anna Durbin, cited research from Johns Hopkins Center for Immunization Research that estimated those odds even higher, at 2.5 times as likely for reinfection.

And while New York City remains an area at ‘high risk of transmission’ with an average of 1,662 cases per day over the last week, city data available for the year through the end of August shows remarkably strong protection for the vaccinated. Just 0.33% vaccinated individuals have contracted the virus and 96.9% of those hospitalized were unvaccinated at the time of their hospitalization.

Ramirez is optimistic that Kane vs De Blasio will prove the vaccine mandates are unconstitutional. He is considering all his options, like transitioning to virtual teaching or moving out of the city.

“At the end of the day, these mandates are really intimidation tactics,” said Ramirez. “It’s an act of psychological terrorism, frankly. I’m not going to succumb to it, and I don’t think that anyone should.”