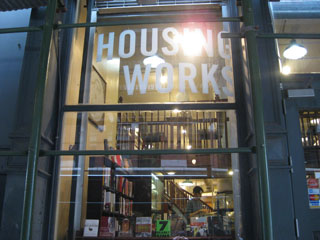 Diana Scholl is riding a bull in a bear economy.

Scholl, an officer for Housing Works — a New York City nonprofit that helps provide housing for uninsured HIV/AIDS patients — has seen her organization’s income increase during the economic crisis.

Despite budget cuts, sales from their community-stocked thrift stores and book stores have increased 10 percent in the last quarter.

“We’ve almost benefited from the economic downturn in a weird way because more people are going to thrift stores,” she said. “Twenty-five percent of our money comes from our social entrepreneur organization, which is our thrift stores and our book stores.”

Housing Works is one of many nonprofit organizations for HIV/AIDS care around the country that are managing to tentatively ride out the economic crisis before the arrival of the economic stimulus package. Their second-hand bookstore in New York City’s SoHo area is a hot draw for lovers of inexpensive literature and has served as their own mini-bailout.

But Housing Works — like many other nonprofits — is eyeing the economic stimulus funds from Washington anyway. They have submitted proposals for federal stimulus funds and have also asked the state to buy foreclosed homes and then sell them to Housing Works at a lower price.

Amy McMahon, CEO of STOP AIDS, a non-profit organization in Cincinnati, Ohio that supplies the community with education and testing about HIV/AIDS, is also not seeing red from the financial crisis yet.

But she is also looking for the stimulus to help her avoid a financial dip. She’s thankful that the first round of stimulus funds were distributed in the form of Medicaid.

“Most of those dollars are going to go into programs that sort of shore up people’s basic needs,” McMahon said.

STOP AIDS receives money from fundraising dollars, state and local grants, and through the Ryan White Care and Modernization Act — the federal program that allows HIV/AIDS patients who make up to $52,000 a year to receive additional funds for medication and health care.

“It’s looking like the money that’s coming into to state from the Ryan White Fund [and other payment methods] is pretty steady,” McMahon said.

But McMahon looks forward to staying in business should she need to tap those funds later.

“I think, especially for our clients here in Ohio, the assistance that people need for things like medication when they lose their jobs, the [stimulus] guidelines are broad enough … their meds can still be covered,” she said.

Ernest Hopkins, Director of Federal Affairs for the San Francisco AIDS Foundation, is looking forward to the immediate impact that stimulus funds will have on HIV/AIDS organizations in California. He thinks the stimulus will bring his organization good fortune, and “should have a very positive impact .”

“A number of the components in the stimulus package are designed to front load a number of key components … to reform the healthcare system,” Hopkins said.

One of the features of the stimulus that will keep the San Francisco AIDS Foundation afloat will be the increased federal match to the Medicaid program for the state.

The California State Legislature had proposed stiff restrictions earlier this year on healthcare access as a result of the state deficit. Before the stimulus funds, California has a deficit of nearly $40 billion dollars.

But now, restrictions to medical care are expected to be lifted and care perhaps expanded to more HIV-positive Californians.

“That will have a significant impact,” Hopkins said.

“Much of the money is hopefully going to be targeted,” Hopkins said of the funds, including a proposed $10 billion towards the National Institute of Health.

However, a shifting of economic plates could create financial faults for non-profits if the financial crisis worsens. McMahon worries that if more people in Cincinnati lose their jobs that resources for STOP AIDS will be stretched too far.

“If we see a larger influx of clients into our organization who are already HIV positive, then absolutely we may need to be able to beef some [money] up,” McMahon said. “What I would expect that we might start to see is where Medicaid can’t help. … That’s when I could see thing stating to change.”

Scholl is also worried that if the nation’s finances are further limited, Housing Works will suffer.

“We’re waiting on payments from the federal government” Scholl said. “Our credit line has been cut, so there are ways that we definitely are struggling.”Stimulus Boost for AIDS Organizations