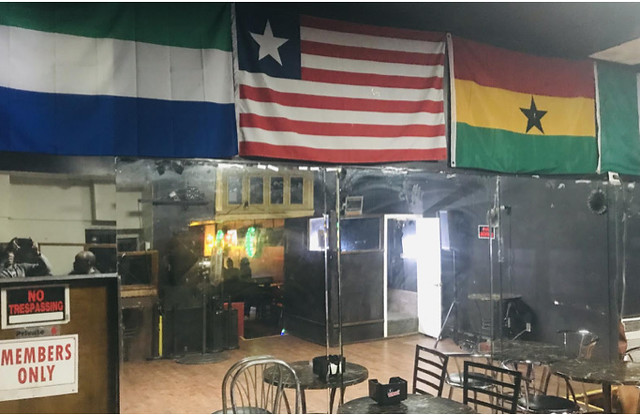 Inside the 1847 club in Staten Island, are flags of the various African countries. Photo by Alpha Kamara

Adolphus Freeman is 46. He arrived in Staten Island, New York with 50 others in 1999 fleeing the conflict from his home country Liberia through a U.S. government repatriation program. He said  their arrival in Park-Hill was resisted by the African American community due to perception and cultural differences that led to fights, arrests and deportations.

“Park-Hill used to be dangerous for us the African migrants. African Americans refused to welcome us. Some of us were harassed and arrested. Over 45 of our colleagues who retaliated were charged to court and some were deported” Freeman said.

Freeman recalled how he was chased one night by a street gang for refusing to greet them.

Years down the line, tension has lessened between the two communities in Staten island because the African migrant’s community here grew to over 50,000 and a realization that what drove them apart should bind them together.

Alex Moore is the CEO of 1847 night club on Bay street in Staten Island. Its name is derived from July 26, 1847 when an African American from Virginia, Joseph Jenkins Roberts declared the colony of Liberia as an independent republic. It’s a key meeting point for members of both communities on Staten Island.

“We play both African and hip-hop music because we serve the two parties. We screen football, African movies and even serve both African and American dishes. This shows we are one and the same,”Moore said.

Abraham Tucker is the president of the Liberian community in Staten Island. With black people facing  racism and police brutality, Tucker said  there is a need for both communities to work together.

“What affects one, affects the other,” he said.  “The racists and the police are not targeting African Americans alone, they are targeting blacks.”

Al Peters  is an African American activist who operates a studio for arts and culture. He blamed Western education as the factor that divides what he called ‘Continent African born’ and ‘American born Africans’.

“When Black history is taught in schools, they make it sound like, the existence of Black people started from slavery,” he said. “No, it didn’t. It started way back when we were Kings and Queens in our villages. Until the slave masters destroyed that peaceful life.”

Peters  said that some African Americans viewed the arrival of African migrants in the U.S. as a threat because they believe they will take their jobs from them. Cultural differences he believes also played a part.

“But all that is as a result of the slavery mentality of the mind placed in our brothers by the colonial powers,” he said. “The same who are still killing black people, the oppressors. This is now the right time to work together and fight for justice,” he said.

Peters said he uses his studio and art  to inform both communities about peace, freedom and love for one another.

“These days, we attend parties, night clubs and chill as a family together which was unheard of in the past” he said.

Over the years, music, sports and intermarriages have played a part in improving the relationship between the two communities.

The Lutheran church in Staten Island attracts worshippers from both the African and African American community.

“We even organized intermarriages between both communities,” said Zizi Kendakai, the  assistant pastor of the church.  “When we arrived here, the community was hostile. But prayers and the choir music got them attracted to this church and we are now united as one family.”

“Behold, how good and pleasant it is when brothers dwell together”, he said quoting from Psalms 133 of the Bible.

These words would lead to everlasting peace between the communities if they live by them, he said.