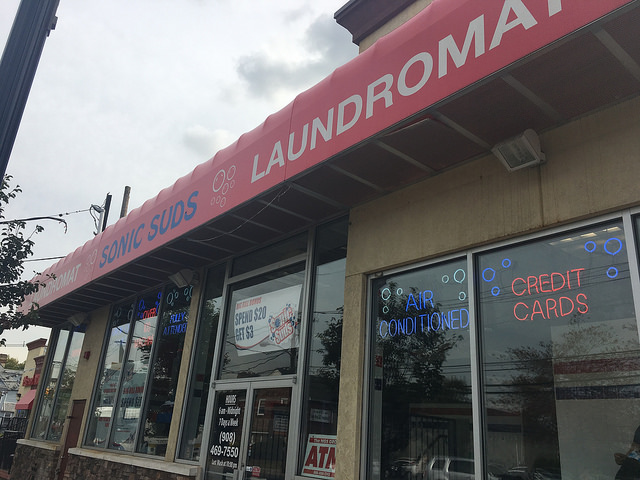 Arriaza, 20, said she was working at Sonic Suds, a laundromat on Morris Avenue in Elizabeth, New Jersey, just about a half of a mile away from the Elizabeth Train Station. Right before she saw Rahami on Sunday night he had allegedly placed a backpack containing five bombs in a trash can near the train station.

Police said two men found the bomb in a backpack.

Arriaza noticed the short, brown-haired and brown-eyed man just “lounging” on the counter near the front desk of Sonic Suds.

“He came in here and he was washing clothes, but around 10:30p.m. I noticed he wasn’t washing anything,” said Arriaza, as she folded the freshly cleaned clothing that she had just taken out of the dryer. “He left after an hour and he came back in and he was just standing right there and he was just looking at me and then around 11:30p.m. he left.”

Arriaza said she had seen Rahami twice and that during this last visit he did not talk to anyone.
She had no idea he was an alleged terrorist. But the next day when she saw his photo on the news, she knew he was the man in the store.

“I knew it was him because I turned on the news and he had the gray shirt and everything,” said Arriaza.

During the two hours that Rahami was inside the laundromat, the Union County Bomb Squad, Federal Bureau of Investigation and New Jersey State Police were just down the road investigating the backpack full of explosives that police believe Rahami had planted at the Elizabeth Train Station.

Arriaza’s sister, Jamie Arriaza had heard about the backpack that was found at the train station through the news. She also knew her sister worked just blocks away so she called her to let her know.

Arriaza, who was working at the laundromat until midnight that Sunday night, was on the phone with her sister when the F.B.I. was investigating the backpack that had “wires and a pipe” in it. After realizing the possible dangerous threat, the Union County Bomb Squad examined the backpack with a drone and determined that there was a chance that the bomb could be live.

The authorities sent in a pair of robots to test the backpack left at the train station.

“The bomb went off at like 12:40 a.m. or something,” Jamie Arriaza, 19. She said that she had heard the explosion while on the phone with her sister. “She was on her way home and left her charger so she came back to open the laundry, get her phone charger, and she was like ‘yo, you heard that?’”

Jamie Arriaza knew of the Rahami family and said that the news of this was shocking and that “he [Ahmad Rahami] was a really good boy.”

Jamie Arriaza described Rahami as someone who came out of a really good family of brothers who had all graduated high school. But Rahami had a record of run-ins with the police.

She said the time he spent in Pakistan and Afghanistan changed him.

“He went over there and came back messed up,” she said.

The Arriaza sisters said they were still shocked about what had happened just a few blocks away from not only the laundromat, but their home. They said that no one had known that Rahami was in the laundromat at the time that the bombs were placed by the train station.

“The scary part was he was here, not washing clothes until 11:30p.m.,” said Jamie Arriaza. “What if he was watching, waiting for it to explode?”