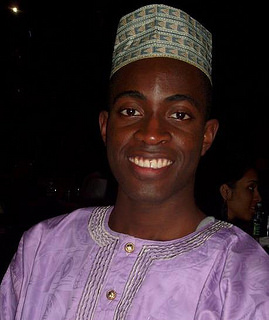 Samuel Chukwueze,25 a Nigerian-American from Cherry Hill, N.J. said he is very “shocked” by the ongoing violence against Christians in Northern Nigeria. One of his relatives was also attacked last year in Nigeria. Photo Credit:Samuel Chukwueze

Samuel Chukwueze,25, is a proud Nigerian-American from Cherry Hill, N.J. He lives and breathes Nigeria or “Naija” as he calls the country he loves so much. That’s why he goes into a state of utter disbelief when he turns on the news and hears about all the violence that’s going on in the northern part of Nigeria, most of which has been directed towards Christians.

Samuel Chukwueze,25 a Nigerian-American from Cherry Hill, N.J. said he is very “shocked” by the ongoing violence against Christians in Northern Nigeria. One of his relatives was also attacked last year in Nigeria. Photo Credit:Samuel Chukwueze

“Both of my parents are Nigerian. I’m very proud of my Nigerian culture, but once I heard about the killings or attacks I just couldn’t believe it,” he said. “How could this happen in Nigeria?”

But it is happening. The suicide bombings targeting churches as well as mosques, schools, colleges, and villages started in 2009 and the number of killings and attacks increased last year.

“Between 2009 and now, we have almost 4,000 people that have been killed-mostly Christians,” said Pastor Laulo Akande, executive director of the Christian Association of Nigerian Americans (CANAN).

The most recent church bombing took place last month in Adamawa state, killing 22 people as reported by Nigerian media. These attacks are the work of Boko Haram, a terrorist organization based in the northern part of the country. The group is rebelling violently against the government in an effort to establish Sharia law (Islamic law) in Nigeria.

“Based on a survey that was commissioned by the state department, Boko Haram is the second most deadly terrorist organization in the world-second only to the Taliban,” Akande said.

According to reports conducted by Human Rights Watch, members of Boko Haram have decapitated and mutilated hundreds of citizens residing in Northern Nigeria and abducted many girls and women as well. One of Chukwueze’s uncles who resides in Kano, a northern city, was attacked by a Boko Haram militant in the past year.

“I was just shocked about what happened and I was just more concerned about my uncle’s safety,” Chukwueze said. “I don’t know why someone would go to a church and kill innocent people.”

Akande said that Boko Haram’s militants kill any group of people who oppose them, including moderate Muslim leaders who have spoken out against their violence.

In response to this ongoing crisis, CANAN has started a relief fund for the victims of Boko Haram. Since 2012, approximately $50,000 has been raised, which goes to those who have been widowed or orphaned due to the violence. The money from the fund has also helped some victims who were brutally attacked receive reconstructive surgery. Victims usually don’t receive any compensation from the Nigerian government according to Akande.

New Covenant Dominion Cathedral, a predominantly Nigerian church located in the Bronx, N.Y. has also helped with fundraising efforts. “Any donations that we have as a church we send to those who are affected,” said Pastor Peter Temanu. “We are solidly behind those who are going through these atrocities in Nigeria.” 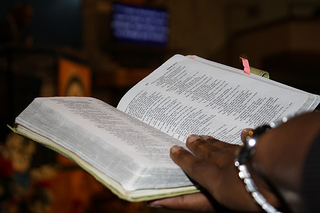 The Nigerian-American community has responded to the on-going killings of Christians in Northern Nigerian by turning to God and praying for an end to the violence. Photo by Kulsoom Khan

CANAN has also sought help from Congress with Republicans Peter King of New York and Chris Smith- of New Jersey, responding with support.

“We got very good help from the U.S. Congress,” Akande said.

He is also pleased with the U.S.’ decision to aid the Nigerian Army fight against Boko Haram by having the U.S. military provide training and some equipment to Nigeria’s Army Special Operations Command.

“The U.S. can do a lot and we hope that the U.S. will actually do more to help the situation,” he said.

Any time that Chukwueze hears about another suicide bombing in his beloved “Naija”, he finds comfort in turning to a higher power.

“There’s so many things that I can’t do, but my faith as praying will help bless
Nigeria,”he said.