The battle for Hillsborough County voters 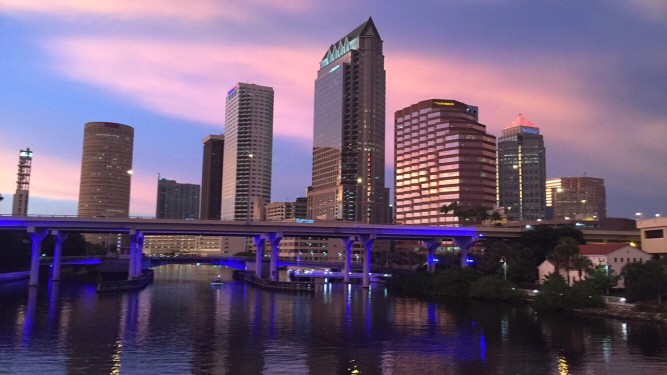 Tampa, a big city in Hillsborough County, is attracting a lot of attention this election season. Photo by @ashmgualtieri via Twenty20

In presidential election years, political scientists, pollsters, politicians, and the people all turn their eyes to battleground states like Florida. Florida has been one of these states for years, and Hillsborough County, home to the city of Tampa, seems to be on the pulse of the country’s wave of change. So, it’s no wonder that Biden and Trump both ended up campaigning in Tampa on the same day, five days before election day.

For the past several years, while the state as a whole has been largely red, Hillsborough County has turned blue. It’s been blue for Barack Obama in 2008 and 2012, and Hillary Clinton in 2016.  Demographic changes are at least partly to blame: This year, Hillsborough County has 366,337 registered Democrats, and just 292,706 registered Republicans. But there are still 275,303 people who fall into the category of “Others”—almost a third of the population—and while the Democrats are mobilizing for Biden this year, Trump supporters are determined to take the county back. The national focus on Florida as an electoral prize has only made them more determined to turn Hillsborough red again: Most poll-watchers agree that Trump will lose the election if he doesn’t win Florida, and for the last 100 years, no Republican has made it to the White House without winning in the state.

The challenge for local politicians in Tampa, especially in a pandemic, is to reach these “Others” in the changing political landscape. Congresswoman Kathy Castor, the Democratic incumbent running for her eighth term in office, has held her congressional seat in Tampa also in part due to the political shift in Tampa that has occurred within the past decade. “Hillsborough County interestingly has really trended Democratic over the past ten years,” said Castor, who credits the popularity of Barack Obama and the county’s increases demographic diversity for this change. (As of 2018, Tampa’s population was 44.6% white, 25.7% Latino, 22.7% Black, and 4.2% Asian.) She argues that the local Democratic party is more in line with the worldview of most residents here. “Democratic values speak to families and small business owners more than the GOP right now,” she said.

Naturally, that view isn’t shares by Castor’s opponent, Republican Christine Quinn, a pro-life Trump supporter with an A rating from the NRA. If there is a red wave in Tampa this year, Quinn hopes to ride it. Quinn and her campaign manager, Allison Clay, have been going to Republican organization events in Tampa that specifically target diverse voters. “You’ve got Black Voices for Trump, you have Latinos for Trump, you have Vietnamese Americans for Trump, Asian Americans for Trump,” said Clay. “We’ve been very involved routinely with all these different groups and organizations. That really helps with our platform of being able to reach these additional people, so they understand who we are.”

This isn’t these candidates’ first faceoff. Quinn lost the 2016 congressional race to Castor, and she only enter this year’s race in April when she learned that Castor was going to be running unopposed. Despite the novel coronavirus, Quinn is still out talking with potential voters. At the grassroots level, her staff has noticed some tension among voters. “People shared with me their fears of putting up a Trump sign in their yard for retaliation from their neighbors,” said Clay. “They don’t want to be hassled—they don’t want to have any issues affecting their home or their safety—but they do tell you that they have voted for him, and they do widely support him, and they do plan on voting down the ticket.”

Clay believes that if they can mobilize this silent majority, the Quinn campaign can pull off an upset. “I really think she can [win],” Clay said. “The No Party Affiliation (NPA) voters—typically, they do tend to vote on the conservative level. You have just as many NPAs registered here in Tampa as you do in Democrats.” Republicans alone could do the job for Trump in Tampa, Clay noted, if they all turned out to vote. “We’re not getting these voters to show up. If we got every registered Republican to show up, vote down the ballot, Christine would win.”

But is the Quinn camp’s view of Tampa realistic or just optimistic?  Mary Anderson—a professor of political science at The University of Tampa who has been studying these races for years—is skeptical. “We know the data point to incumbents winning at very high margins unless they are involved in some sort of scandal, or voters are disillusioned with the job they are doing,” she said. “But by all accounts, Kathy Castor has a wide approval rating.” She said Castor works with her Republican colleagues like Gus Bilirakis, who represents the northern part of Hillsborough and neighboring Pinellas County. Bilirakis and Castor have crossed party lines several times to introduce legislature, including in 2016 for the ACE Kids Act which streamlined medical services and reduced the hardships on the children, in 2017 for the Medicare Civil and Criminal Penalties Update Act which updated the punishments for Medicare fraud, and in 2018 for closing“zombie campaign” loopholes. “She does well by this county,” said Anderson. “Plus, she has name recognition and that’s really the golden ticket in terms of the incumbency advantage…I think it will eventually come down to her unseating herself.”

Party battles aside, one issue that is bound to affect this year’s race is poverty, which plagues residents of Hillsborough County and Tampa harder than other counties of its size and metropolitan status. For 2018, the overall poverty rate was over 19%. The voters in areas outside of The City of Tampa, often go red, but it still may not be so cut-and-dry on November 3rd. “I think we are waiting to see what’s going to happen in the suburbs here in 2020,” said Anderson. “The city tends to vote blue, tends to be much more Democratic. The rural areas, the suburban areas, and the outer part of the county tend to vote more Republican, and they tend to be red. And there’s a lot of evidence to suggest that suburban voters, particularly women, are—in this election anyway—looking to the Democratic party rather than the Republican party. Now whether that is a reflection of the top of the ticket with Donald Trump, I don’t know. We’re going to have to wait and see how that goes.”

Casey Bauer is the Florida data director for NextGen America, the nonprofit progressive advocacy group founded by Tom Steyer that educates and mobilizes young Americans. Since the pandemic, Bauer has been reaching these young voters virtually. “Tampa, I really think, is a microcosm of the nation as a whole,” Bauer said, in how it “really captures the new growing divide in America between cities and rural areas…In 2008, it voted for Barack Obama, but we still had Republicans elected to county office.” Bauer, like Anderson, believes that tides will continue to shift in Tampa and that this race is just one more chapter in that story. “The Hillsborough as we know of 2020,” he said, “is not going to be recognizable to the Hillsborough of 2024.”