The Bell of Hope Continues to Bring the Community Together 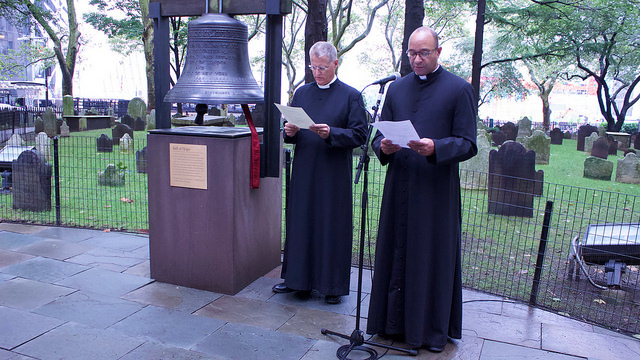 Rev. Dr. William Lupfer (left) and Rev. Phillip Jackson read the prayer of St. Francis before the tolling of the Bell of Hope at St. Paul’s Chapel. Photo by Alexandra Myers.

It was a weary, cloudy morning on the 17th anniversary of 9/11. A small group of people from all over the country gathered together at St. Paul’s Chapel in Lower Manhattan to hear the tolling of the Bell of Hope and to remember the lives that were lost.

One attendee was Renny Rose, 78, who lives right down the street from the chapel.

“I haven’t been here for a couple of years and I am moved today,” Rose said as she began to tear up.

She said that she witnessed the Twin Towers falling from her apartment window while her children were at school only a  block away from the attack. The service brought up the feelings she had that day.

“Fear, panic like I have never experience in my whole life and paralysis,” Rose said.

But Rose wanted to be there and remember.

Each year at 8:46 a.m., St. Paul’s Chapel pays respects by ringing the Bell of Hope, given to the city of New York by Lord Mayor of London a year after the attacks.

“We want to invite people to hope, but also give space for their experience and not impose ours on them,” said Reverend Dr. William Lupfer, 57, the Rector of the chapel. This is his fourth year overseeing the 9/11 ceremony.

It began with a welcome speech from Lupfer and Reverend Phillip Jackson, 55, who is the Vicar of The Trinity Church Wall Street. Following the speech was the tolling of the Bell of Hope, a Silent Prayer, the Prayer of St. Francis and the Blessing.

“The economy of the ceremony is a good thing,” Phillip said. “It’s not to make it about us leading the service. It’s more about gathering people together and let them remember.”

After the 9/11 attacks, St. Paul’s Chapel became a missionary relief center for hundreds of rescue workers, police and firefighters. Volunteers from all over the country came to help. St. Paul’s stood “as a symbol of recovery and hope.”

Today, volunteers from 9/11 continue to visit St. Paul’s Chapel each year for the ringing of the bell. One volunteer, David Somerville, 75, who is a minister in Brunswick, Georgia, has attended the ceremony for the past 16 years. Unlike most people that attend the event, Somerville viewed the ceremony as more uplifting.

“The emotions are positive and wonderful now because there is a lot of hugging going on,” said Somerville. “I love hugging and being hugged. It is a very healing kind of thing to do.”

Through the years, the Bell of Hope has become more than just a ceremonial service: It represents a community coming together.