The fight for climate education in New York 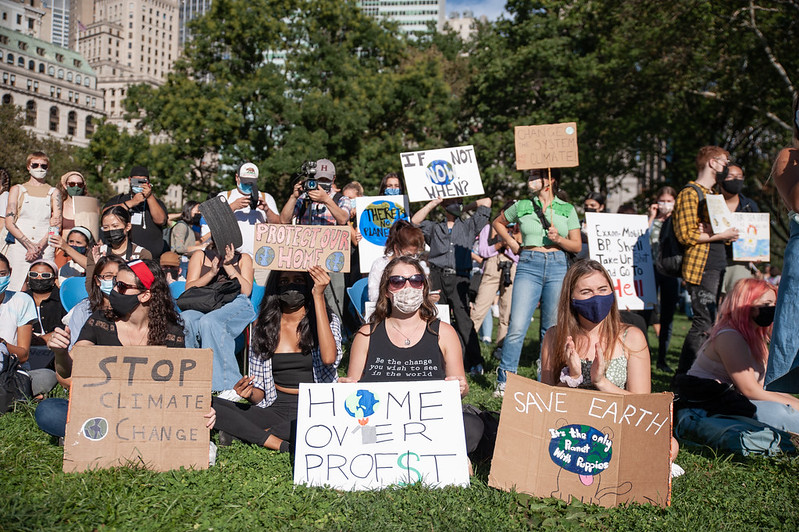 Youth activists sitting in Battery Park and listening to speakers on the stage during the Global Climate Strike. September 24, 2021. Photo by Nikol Mudrová

A third-grade presentation on the polar bear and the warming temperatures in the Arctic was the first time Ellery Spikes, 16, learned about climate change. While she was concerned for the polar bears, Spikes recalls that she had no idea her community too was feeling the negative effect of climate change.

Five years later, after the Global Climate Strike in September 2019, she started seeking information about climate on her own. Then last summer, after extreme heat waves, wildfires, and flooding swept America, Ellery became an activist.

She started with education as New York State has no climate lessons in its 24-year-old K-12 framework.  She designed a series of advisory lessons on climate change for the NEST+M High School she attends on the Lower East Side. “I thought other students must be scared too when we were not talking about it,” she said.

Concern about the present and looming climate change has given rise to so-called “climate anxiety” among Gen Z. The study, published in December 2021 in The Lancet, found that more than 50% of children and young people globally feel anxious, powerless, and guilty when it comes to climate change. And the study’s authors pointed to a lack of climate change solutions as a vital cause of those emotions.

Oren Pizmony-Levy, professor at the Teachers College at Columbia University, wants to tackle that with his ongoing project. With the support of the National Science Foundation, he intends to develop an innovative climate change curriculum for the city’s public schools.

Legislation is needed for curriculum changes to be officially implemented among all New York public schools, though.

In fall 2021, Ellery saw this bigger picture and joined 14 other students on the Youth Steering Committee of the Climate and Resilience Education Task Force (CRETF). The group connects people from teachers to students, NGOs, and policymakers who advocate for climate education in New York State public schools.

On Wednesday, March 2, Ellery and other students zoomed into a listening session organized by the CRETF with five State Senators and Assembly members to discuss five climate education bills pending in the State legislation. Ellery pressed about the most critical issue: how would funding for climate education be distributed equally among the city’s public schools. Because so far, it is not only inadequate but also inequitable.

Manhattan Assemblymember Linda Rosenthal explained that a Senate bill that she co-sponsored includes grants for climate education, funded by a new checkoff box on tax returns.

While Emily Fano, CRETF manager and Senior Education Manager for the National Wildlife Federation, was skeptical of relying on “unpredictable” appropriations she was also concerned about the lack of teacher training. “Teachers don’t have time to teach about the climate crisis; they’re not prepared because they don’t have proper training and resources,” she said based on the CRETF Survey they conducted in 2021 among New York City PreK-12 teachers. It showed that 52% of them teach about climate change, but only about 1-2 hours per year; 68% of teachers indicated they lacked the time to do so.

Pizmony-Levy believes that New York City already has infrastructure for implementing climate education. He points to sustainability coordinators that all city’s public schools are required to have. Their job is to oversee curriculums, train teachers, take care of facilities in energy reduction, recycling, and waste management. However, only one in five indicated they’re “very informed” about climate change in Pizmony-Levy’s survey. “We just need to invest in them,” he said.

Once sustainability coordinators have appropriate training, schools will finally be sustainable as a whole. Pizmony-Levy believes there are dozens of everyday activities that could be changed. “Even in physical education, we can encourage kids to walk or take stairs rather than using elevators or cars,” he said.

That is essential, according to Pizmony-Levy, because “if you only talk about climate change in class, but then you have lights in classrooms switched on the whole day, it’s giving kids mixed signals,” he said.

Pizmony-Levi’s project is based on cooperation between teachers and scientists and brought them together last three summers. Scientists explained issues related to climate change and worked with teachers to put together lesson plans and classroom materials. “We want to create local, relevant materials that would help teachers and students understand how climate change will look like in their specific region,” he said.

The locally focused curriculum really could ease the anxiety youth may feel by providing them the opportunity to help tackle climate change. That is why Ellery Spikes got involved in advocating for climate education in the first place. “We (youth) want to be part of the solution instead of just victims of the problem,” she said.