The Need for Notary? 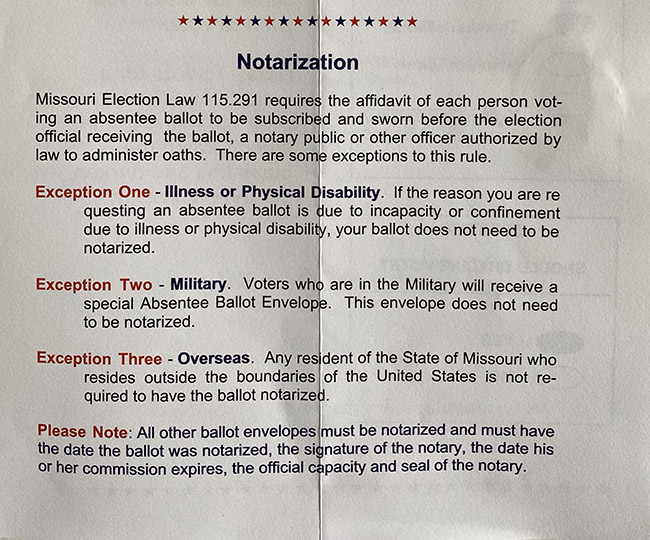 “I’m sorry, we don’t offer notary services today,” said a UPS employee on Third Avenue. I let out a confused and slightly annoyed sigh as I left the store and walked around the corner. Leaning against the wall, I called two other UPS locations, which yielded the same response. Now I was certifiably annoyed. Eventually I located a store that was currently providing the service, but I had to trek 25 minutes south to Murray Street. All of this just for an absentee ballot?

I stood outside the UPS store for almost an hour. I was starting to sweat, my shoes were squeezing my feet, and I was working on an empty stomach. I jokingly questioned, “is this the only notary in the city” because all the customers in front of me also seemed to be there for the notary services. Eventually, I completed the process and dropped my notarized absentee ballot at the post office. What should have taken 30 minutes at most took almost three hours. In that moment I understood that this was another process that could dissuade people from voting. But I persevered regardless in the belief that this was the widespread policy for all absentee voting. Again, I was wrong.

I came to this startling realization when my friends and I discussed the absentee voting process. One is a registered voter in Pennsylvania and the other in Florida, and neither had to have their absentee ballot notarized. No notary. No affidavit. Just a simple fill out your ballot, seal your envelope, and send it back. That seems like the most logical process to facilitate absentee voting, especially during a pandemic. So why is this policy not widespread? More importantly, is this just another form of voter suppression?

It is increasingly important to highlight how inconsistent this policy is across the United States, and how it affects how accessible and accurate voting can be. As a registered voter in Missouri, my first call was to the Kansas City Election Board where I spoke with Republican Director, Shawn Kieffer. As Republicans have the governorship, Senate, and House, Mr. Kieffer told me, “They’d be probably not interested in easing that restriction.” Makes sense given that this party typically screams “voter fraud” as a reason to uphold this archaic doctrine. Mr. Kieffer also said, “We do check everybody’s signature. So, if we get an absentee ballot request in, first thing we do is we go to our files we have everybody’s signature scanned and we compare it to make sure it’s that person. Then when we get the ballot in, they fill it out and turn it in, we also do the same thing. We compare signatures so we know it’s not somebody actually voting for that person.”

Although sound, something about the policy seems contradictory. If a state has a signature verification process, why the added requirement of notarization? This is why the argument of voter suppression arises because there seems to be no concrete reason to uphold this policy. I later spoke with a representative from the Alabama Secretary of State’s Office and she stated that the reason for requiring notarization is due to the fact that they do not verify signatures. The same holds true for the state of Oklahoma, although state officials created a provision for voters to avoid the notary requirement if they submit a copy of their I.D. with their ballot.

I also spoke with Alaska Division of Elections Public Relations Manager, Tiffany Montemayor, who explained, “For the 2020 general election, it’s no longer a requirement to have a witness or a witness signature.” She said that in light of covid-19, it would have been harder for voters to obtain that witness signature with so many citizens staying home. Even though this requirement was only waved for this current election, Alaska’s reason makes sense and it baffles me that other states that upheld this requirement have not followed suit.

With countless blatant examples of voter suppression this election from fake ballot boxes, the limiting of polling places, to the removal of USPS collection mailboxes, the inconsistent policies of a notarization requirement are just a decades old process meant to dissuade voters under the guise of “voter fraud prevention.” If this reductive policy cannot be lifted on a national level during this unprecedented situation that is a global pandemic, it remains quite obvious as to why it is still in place.