Caroline Weaver is on ribbon duty and it’s not going well. She is tying red bows onto yellow envelopes, destined for the pencil aficionados who are part of CW Pencil Enterprises’ monthly subscriber program. Weaver, the owner of the small store in Manhattan’s “Lower Lower East Side,” has taken over after her staff suffered cramps and “finger fatigue.”

“This is literally the worst time of year, during the worst year,” Weaver groans. She and her network of small business owners are holding on in a year where COVID-19 made tourists stay home and offices lie empty.

Weaver opened the store in the fall of 2014. After a miserable winter she decided to quit her retail job and pursue her retirement dream. She spent the summer preparing to launch the business armed with just a handful of internships, a fine arts education, and a lot of knowledge about obscure pencils.

“I was just very exhausted and really had a horrible winter,” said Weaver. “And truly just woke up one day and was like, ‘okay, none of this makes sense but I’m miserable and I have to do something about it and I’m also very young and I have nothing to lose.’”

First there was an Instagram page to announce the brand, then a website that actually sold the pencils. And then in March 2015 she opened a brick and mortar location.

“The endgame was always to open a store,” Weaver said. “But I wasn’t so naive to think I could open a physical store without also having a web presence. Back then shopping via Instagram was not really a thing. That was in 2014 so Instagram served a very different purpose back then.” 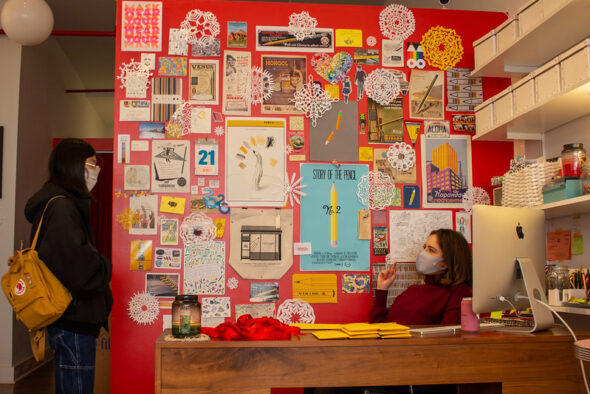 One of Weaver’s early customers was Brittany Bond. Bond, who had moved to the area with her husband, would stop by the store when she wasn’t working as a nanny and barista. But it was the birth of Bond’s daughter that created a deeper connection.

“I’ve just been a customer there for a long time,” said Bond. “And then, after I had [my daughter]… people become friends with you when you have kids, you stand out a little more. So we all became friends.”

Bond’s new role as a mother created a career challenge. She was no longer able to work as a barista or nanny now that she had a child of her own.

“None of my jobs had a maternity plan built into them,” Bond said . “And none of them could cover the cost of childcare either. So I had to find something that I could do with her.”

In 2018 Bond decided to start working towards her dream of owning a bookstore. Instead of applying for a lease to open a shop, she created an Instagram page and started posting used paperbacks for sale.

“I started an Instagram about a year before I started going out on the street,” Bond said. “I would post like one or two books a week. It wasn’t a huge thing, but it was more just getting my knowledge of books out there.”

A year later Bond was ready to take advantage of New York City’s flexible vending laws. She piled her books and young child into a homemade wooden cart and started selling books on the East River Esplanade.

“About a year in, my brother flew out with a jogging stroller he found at a thrift store that he gate checked and then stripped for parts, said Bond. “[He] built the book cart in the air shaft of my building. And then I started selling on the street [in] January 2019.”

Common Books Bookcart, which specializes in paperbacks and female writers, continues to operate on Saturdays. It’s only overhead costs are a storage unit that houses the cart and inventory. Bond says sales (which mostly happen online) continue to pay that rent.

Natasha Gilmore is an Instagram customer of Common Books. She only just visited the cart in October. Bond credits Caroline Weaver, who hosts a book club that Gilmore attends, with connecting them. Gilmore herself has three jobs. But there’s only one dream job for her; owning her own bookstore.

“My core goal in life was to open my own bookstore,” Gilmore said. “Because I’ve had a lot of jobs and it’s the one job I’ve loved the most out of all of them that I’ve had.”

When Gilmore moved to New York, she reconnected with Jeff Waxman, an old friend from the book publishing world. Both of them lived in the Jackson Heights neighborhood of Queens. And both of them saw a need for an English-language bookstore (there are currently none in the neighborhood).

“We wanted to start working on a book store,” said Gilmore. “It’s been stalled because of quarantine. But now it’s kind of safer to go outside if we mask up. And with everything that we had [we] just went out onto the street near the Farmers Market and put the books out with some hand sanitizer and gave the books to people on a pay-what-you-want model.”

The enterprise is called Open Borders Books and is run by around eight collective members, including Ms. Gilmore and Mr. Waxman. All of them have other employment, which allows the enterprise to live somewhere between for-profit and nonprofit. Proceeds cover operating costs, go towards an eventual brick-and-mortar, and are put back into the community through local nonprofit organizations.

“We all have day jobs, and I’ve got three jobs,” noted Ms. Gilmore. “So, we only sell a few books a week, and it’s basically just what we can manage if we are making deliveries.”

Back at CW Pencils Enterprises Caroline Weaver explains (between tying bows) that she was recently featured on Adam Davidson’s podcast called, “The Passion Economy.” The podcast profiles businesses that don’t make sense to a money person like Davidson. So how does a niche business (like the only pencil store in the world) make sense financially? They foster community, like the book club that brought Gilmore and Bond together.

“This last month [Weaver] asked me to pick out the book for the book club,” Bond said. “She sends people to the bookcart to buy whatever book they’re reading often, and is very generous with that. And that’s how I met Natasha [Gilmore] too.”

For Weaver, the book club was less a strategic business decision than the realization of another lifelong dream.

“I always wanted to have my own book club,” said Weaver. “And having a physical space that is mine that is a public space is a perfect opportunity to do that. It does very much feel like a personal thing. Most of our book club members are not even people who live around here. They’re people who come down here just to come to our book club.”

Niche businesses also trade on the expertise of their owners. Weaver has authored two books on pencils and given a short TED talk on their design. Bond tracks down particular editions of books at local bookstores and, increasingly in the COVID-era, online. Gilmore has worked as a bookseller and book reviewer, and has a strong network within the publishing industry.

“To me, it is a calling,” said Gilmore. “For me, what I can contribute to the world is this. I don’t know if it’s super useful, but it’s what I can do.”

And while these businesses may have started online before expanding into the real world, local engagement has proven to be make-or-break in 2020.

“I realized throughout the pandemic the hard truth that I think a lot of New York City retail shop owners are realizing, which is that we depend on tourism much more than I think most of us realized,” said Weaver. “…if tourists want to come visit us, cool, that’s awesome, I would like to have them but I started to realize I love my community. That it’s the community that keeps me going.”

With that in mind, Weaver is changing CW Pencil Enterprises. The subscription boxes she is wrapping are the beginning of the end. The last box will ship in March 2021. And over the next few months, Weaver will expand her offerings to become a full-service office supply store focused on the needs of her community.

“I feel like this pandemic has given me this humongous, scary but also very exciting opportunity to reimagine my business for whatever this new retail climate is that we’ll be re-entering one day,” she says. “I don’t really have a choice because it’s either close or evolve.”