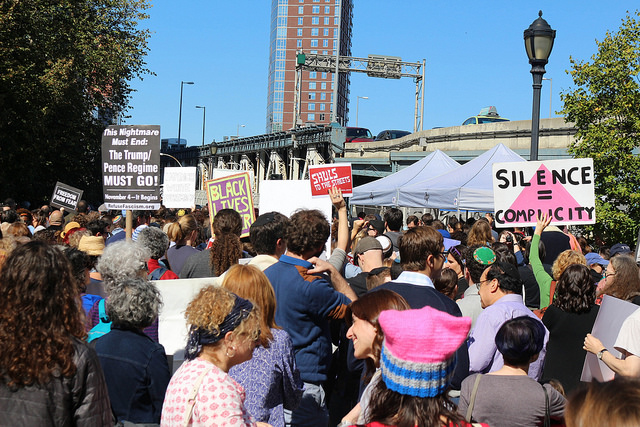 Demonstrators gathered in Brooklyn Plaza for the March for Racial Justice yesterday. Photo by Claire Tighe

Like many people of color in New York City, Raheem Fayson, 35, of Crown Heights, Brooklyn, comes into contact with law enforcement too often.

“I get stop-and-frisked on a regular basis,” said Fayson. As “a black man from inner-city Brooklyn, I be guilty by association. I can think of a million ways that racial injustice be impacting my community, but it’s all about what the masses is gonna do about it.”

Fayson joined thousands of others in Brooklyn Plaza, just below the Manhattan Bridge, for yesterday’s March for Racial Justice NYC. It was a demonstration aimed at bringing attention to issues affecting people of color, like gentrification, broken windows policing and immigration.

Many marchers voiced concern with recent tweets from President Donald Trump about NFL protests and his response to the hurricane in Puerto Rico.

One demonstrator in the crowd wore a Colin Kaepernick jersey. Protestors held up signs that read, “Kaepernick for President,” “Black Lives Matter” and “Respect Women of Color.”

Denisha Jingles, 29, of Bedford-Stuyvesant, Brooklyn, said the fight for racial justice wasn’t just about her as a black woman. It was for everyone, including black people, women, LGBTQIA folks, Muslims, and “our Jewish brothers and sisters.”

“New York City is a place full of what the world sees as diversity, but people still have their individual struggles,” she said. “Children are being suspended from schools and they’re coming into contact with police officers more often.”

Jingles also raised concern at the thousands of people arrested annually for jumping the subway turnstiles. According to a report from the state of New York, 89 percent of turnstile jumping arrests in 2017 were African American and Latino men.

That’s a problem,” said Jingles. “New York is great for the different amount of people we see, but New York definitely has work to be done.”

Under the banner of “racial justice,” demonstrators drew connections between the struggles faced by people of color locally in New York City and the actions of the federal government, especially those of the last week. 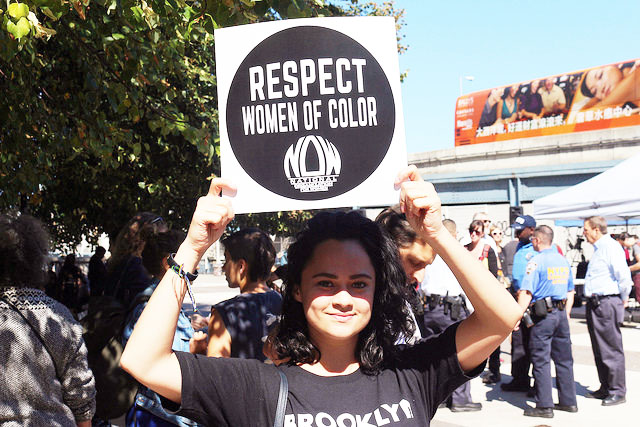 Destiny Arturet, 27, a Puerto Rican woman from Crown Heights, said she was present at the march to support people of color, especially Puerto Ricans, who weren’t receiving the care they needed after Hurricane Maria.

“The way that Trump has reacted to what’s going on in Puerto Rico is heinous,” she said. “People are dying. We have people who are without homes, without water, without food. I don’t feel like our federal government is acting the way that it should. It feels a bit devastating.”

Christopher Jackson, 30, of Bedford-Stuyvesant, thought it was important to respond to the federal actions he felt were “promoting hatred.” For Jackson, racial justice was a long time coming.

“When you don’t treat a wound for a long time, it becomes infected and starts to kill the body,” he said. “I think that’s happening now.

As Kendrick Lamar’s song “We Gon’ Be Alright” started to blare from the speakers, Jerin Arifa of Elmhurst, New York, spoke about her experience as a Muslim woman who was almost run over after the 9/11 terrorist attacks.

“I look around the march here and see people of all races,” she said. “We’re only going to get through this if we’re together and if we really understand that (we are) very, very connected.”

The demonstration ended with a march across the Brooklyn Bridge to City Hall. A sister march in Washington D.C. drew thousands of protesters to the Capitol on Saturday.