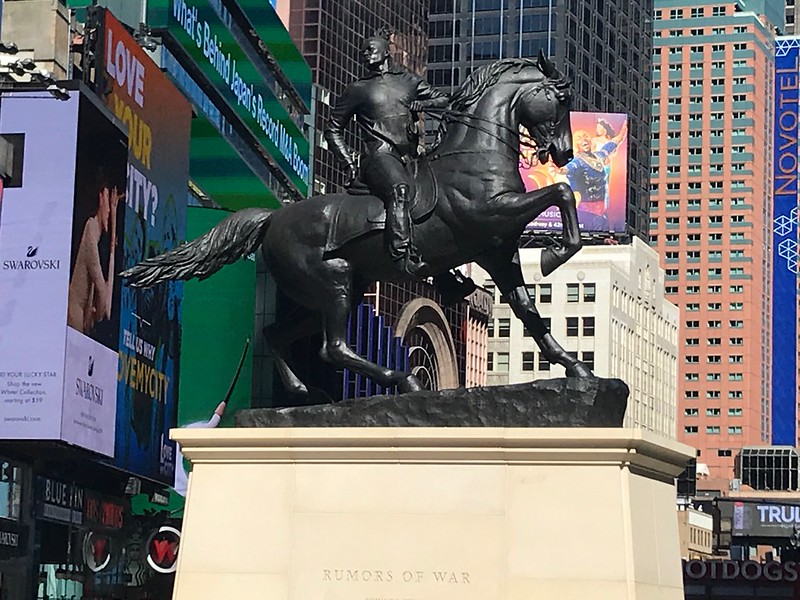 This past weekend, an unexpected visitor came to Times Square.

Times Square welcomed Kehinde Wiley’s “Rumors of War” a 27-foot bronze statue of a black man with dreads wearing  “urban wear” — a hoodie, ripped jeans, and Nikes, while sitting atop a horse in mid-gallop.

The statue, which sits in the bustling plaza closest to 46th Street, was created by the  Nigerian-American visual artist and native New Yorker, whose most recent claim to fame is the 2018 oil painting portrait of former President Barack Obama.

The statue, which mimics the statue of Confederate General J.E.B Stuart, provides an impressive trifecta of accomplishments for Wiley. It is his first public work of art, his biggest in size, and unarguably his most awe-inspiring, even for a place such as New York. The statue has been a jaw-dropping sight for visitors who can be seen circling the statue, reading the inscription to the left, moving to the center, craning their necks in order to take it all in from top to bottom, and then walking to the other side to assure that they hadn’t missed anything.

LaDarryl Blair, 22 a rapper from Dallas, Texas, came to New York City for a business meeting, and admitted he didn’t really pay much attention to the statue at first.  He was focused on taking photos with his friend. Once he took time to learn about the significance of the statue, he became intrigued.

“This is groundbreaking and controversial for a lot of reasons,” Blair said. “It’s going to push the envelope because a lot of people would have been scared to do this type of thing, especially in a place where the majority is white people.”

Blair, said the statue’s bold message encourages him to continue to be bold in his music career, too.

“I like to stray from the norm and push kids away from doing drugs.’ he said. “The hip hop industry influences black youth to do crazy things. I think they need to hear something different.”

Blair also expressed frustration, drawing a parallel between how the sculpture celebrates  the black man and the September 2018 shooting death of Botham Jean, a 26 year old black man from Dallas, and the meager 10 year sentence his killer received earlier this week.

“It’s frustrating and I can’t even put into words what would it would have been like if it was a black man who entered a white woman’s home,” he said. “I think it just goes to show why these sculptures are important because we aren’t heard enough. We have so far to go.” 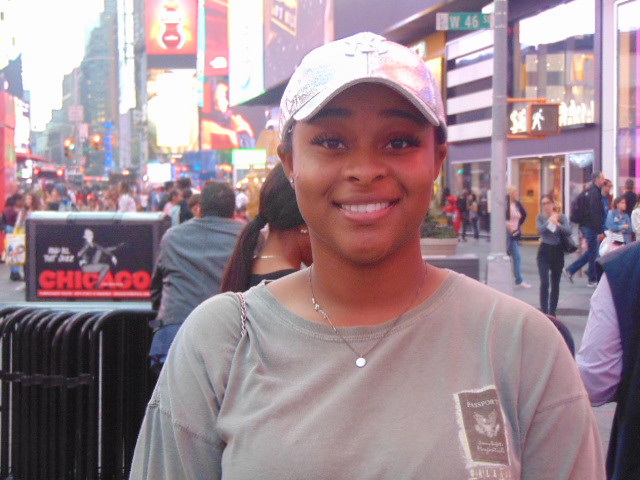 Darian Jones, 24, a paralegal administrative assistant came to New York City for business and was pleasantly surprised to come across Kehinde Wiley’s “Rumor of War” an  art installation in Time Square. Photo by Sope Aluko

Darian Jones, 24, a paralegal administrative assistant, from Dallas, Texas said the messaging was very powerful to her.

“In terms of the message, I can sum it up in a few words:  rise above,” she said.“I see the hoodie and it represents the Trayvon Martins of this time. The different pieces that he put on the statue are many items that African Americans wear everyday and are stereotyped for. You wear a hoodie, you’re a thug. You have dreads, you’re not well groomed. I have so many thoughts and just not enough time.”

For Paul Ferrara, the monument has served as an opportunity to talk to the public about his passion for art education, as an Art Ambassador for Time Square Alliance, a group founded in 1992 that works in the plaza to promote major events.

“When I found out about this possibility [of the statue being unveiled here] I was very excited to engage with people about it,’ he said. “It’s a sculpture that’s really changing the dialogue. There’s so much going on with monuments, evaluating what significance they hold in society and the stories that they tell.  What Kehinde is doing with his work is changing the story and offering another story.”

The sculpture will be in Times Square until December, and then be moved to Richmond, Virginia It will be permanently installed in Virginia’s Museum of Fine Arts on Ashe Boulevard, less than a mile from the J.E.B Stuart monument.