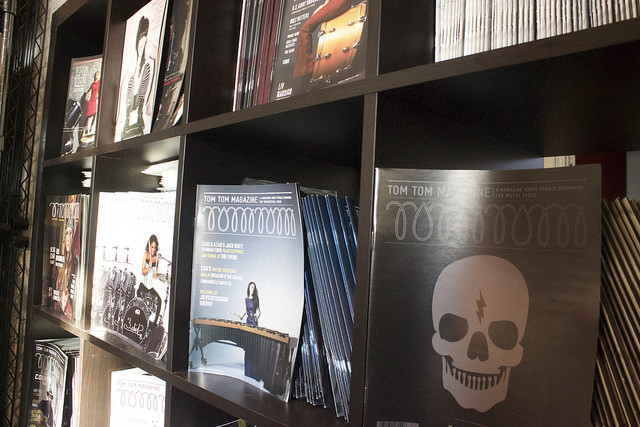 Neck-deep, in what some still treat as a boys’ club, the women at Bushwick-based “Tom Tom Magazine: a Magazine About Female Drummers” defy stereotypes with their publication and unique approach to giving drum lessons.

The magazine, now in its’ fifth year of publication, aims to shine a light on the otherwise less exposed world of female drummers. In 2009, editor and founder Mindy Abovitz decided to Google female drummers and was less than satisfied with what she saw.

“She found nothing but pictures of women holding drums; sexual fantasy type things,” said Mickey Vershbow, 23, the section editor of the magazines’ techniques section. “She decided to start a magazine dedicated to female drummers, to elevate their status in the industry and give them a voice.”

Issues are released in a quarterly cycle, each issue featuring a different drummer. The drummers featured play in a variety of groups and settings, with a cross section ranging from the classical performers to a member of Beyoncé’s live band. The diversity of their features has made Tom Tom the third most popular drum magazine in the country. 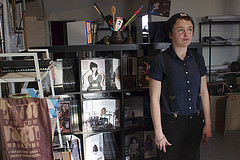 Natalie Baker, one of the primary directors at the drum academy. Photo Credit- Raz Robinson

“When Tom Tom started, there might have been a sense of, oh yeah I want to be in that magazine just because I want to support what they’re doing,” said Natalie Baker, 25, a director at the Tom Tom Academy. “But the cool thing is, that at this point, the magazine has gotten so big that it’s treated as a really serious drum magazine that you want to be in inherently.”

In the wake of the publication’s success, Abovitz approached Vershbow and Baker about starting up a drum school that caters exclusively to women. The team hit the ground running and in September 2014 began holding lessons on the stage of local music venue The Wick.

Moving through a maze of un-insolated cold hallways, up several flights of concrete steps, and finally through a door that could just as easily lead to a maintenance closet is the academy’s studio. Inside the small space a single lamp clipped to the handle of a speaker shines directly into the corner illuminating the words “Tom Tom”, decoratively painted along the wall.

“Fortunately, we happen to share the office with them [The Wick] and they were happy to let us use their space during the daytime when they weren’t having shows,” said Baker. “It was this great transition where we had this idea and didn’t have $50,000 to start it up. Once it became apparent that people were into it we were able to invest in our first lesson studio.”

The mood lit studio and chalkboard wall, covered in half erased musical notation, cast a shadow on the single mahogany drum kit and musical equipment arranged neatly against the adjacent wall.

From their new studio, located in the same warehouse as The Wick and well known Bushwick rehearsal space The Sweatshop, the academy teaches students from a wide range of demographics, the youngest student being five and the oldest 45.

According to Baker, there is something powerful and appealing about seeing a drum school that uses women in its’ marketing as has only women as instructors. She emphasized how the stagnant imagery that surrounds drumming in the media is part of what might keep women away.

“Having a female instructor really puts me at ease because drumming is such a male dominated thing” said Josslynn Riot, 27, a new student at the school. “You don’t see that many female or women identified drummers, and as a woman it feels really important to be in that space.”

The interest in reaching out to women who have been shied away from playing the drums informs the academy’s desire not just to influence the known face of drumming, but to change the way the instrument is taught.

In a lesson, Vershbow’s tone is quintessentially that of an educator, confident and encouraging. She counts and plays along with her students, never glossing over the nuances and always considering their needs.

“Most schools have this approach of, if you’re going to take lessons you have to take it very seriously and there’s only one way to do things,” said Vershbow. “Our approach is to say drumming can be a part of your life in any way you want it to be.”

Don’t be fooled by the relaxed nature of that statement, Vershbow forged her skills as a drum performance major at the Berklee College of Music. Similarly the instructors at the academy are all seasoned players and performers.

“If you want to take lessons every once and a while that’s cool and we encourage it,’” said Vershbow. “If you want to play, practice a lot, and really want to get serious about it, our instructors are equipped for that too.”

At the core of everything, the Tom Tom Academy looks to expose as many people to drumming as they can, and running a school for a suppressed group of musicians is the way in which they facilitate that need.