Train crash kills one and causes chaos in Hoboken 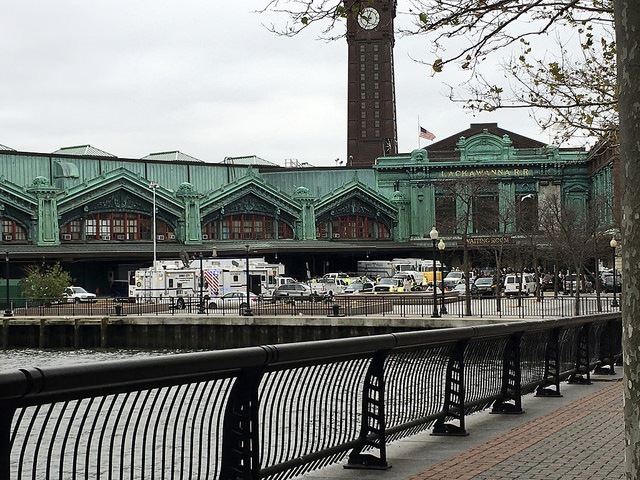 The Hoboken Terminal is a large transportation hub for commuters into Manhattan. During rush hour this morning a commuter train crashed into the terminal, killing one and injuring over 100. Photo by Jennifer Cohen

A NJ Transit train crashed into the Hoboken, NJ Terminal killing one and injuring over 100 as it came speeding through the terminal during rush hour this morning, officials said.

During rush hour around 8:30 AM, a commuter NJ Transit train traveling from Spring Valley, NY to Hoboken, NJ entered the Hoboken Terminal at a high speed smashing through the barriers meant to slow it down and into the waiting area wall where it finally stopped. Gov Chris Christie of New Jersey and Gov. Andrew Cuomo of New York, flew into Pier A Park in Hoboken on their helicopters at 2 PM to brief the public on the situation as they work together to find out exactly what happened and to prevent an accident like this again.

“We don’t know what happened or why it happened,” said Gov. Cuomo. “The train obviously came in at too high of a speed.”

They are looking at the engineer of the train to see if he is at fault. He is in the hospital with serious injuries, but is cooperating with officials during the investigation, said Gov. Christie.

Hoboken resident Fabiola Bittar de Kroon, 34, was killed, the State Medical Examiner’s office said. She had been struck by debris.

The Hoboken Terminal is a major transportation hub for commuters into Manhattan. The historic terminal was built in 1907 and serves nine NJ Transit rail lines, various NJ Transit Bus lines, the PATH train into Manhattan, and the Hudson-Bergen Light Rail.

“Anytime there is a disruption to the Hoboken terminal it’s a major event here,” said Juan Melli, the Communications Manager for the city of Hoboken. “Fifty-six percent of our residents take public transportation to work every day. Unfortunately, the one victim that passed away is a Hoboken resident.”

Abby Rivers, a Hoboken resident and local business owner, was on her way to the gym at 8:45 AM, on Sinatra Drive, just a few blocks from the terminal, when a friend in Connecticut texted her to see if she was ok. She had no idea what her friend was talking about and wanted to find out more, so she kept walking to the gym.

“I get to the gym here and a lot of the management was out front and they said that there was possibly a shooting or a bombing,” said Rivers. “There was already police activity her and they weren’t letting people in the gym unless they had their membership out. Then a woman comes over and said that it was a train that derailed. She said she was on the platform when it happened and she was really shaken up and said there was a lot of blood.”

Rivers said she also reached out to a friend who commutes through the station from Fairlawn, NJ to see if she was ok. Her friend just missed the crash by 15 minutes as she transferred to the PATH train.

Ben Rose, 18, of Short Hills, NJ, was walking out of the station when the train crashed.

“I was probably a few 100 feet away,” said Rose. “I just heard this huge crash, it sounded like a bomb blew up in the train station, then I looked back and there was this huge flash of light and I heard screaming and everyone was telling me to run, so we all ran pretty far.”

Officials said all NJ Transit trains will be affected as there is structural damage to the station. But the PATH train from Manhattan is open as there is no damage to that station.

“People that live in Hoboken will be able to get home, people that live away from Hoboken, good luck, the best to ya,” said Eddy Santrangrillo, of Howell, NJ, a maintenance worker for the PATH train.