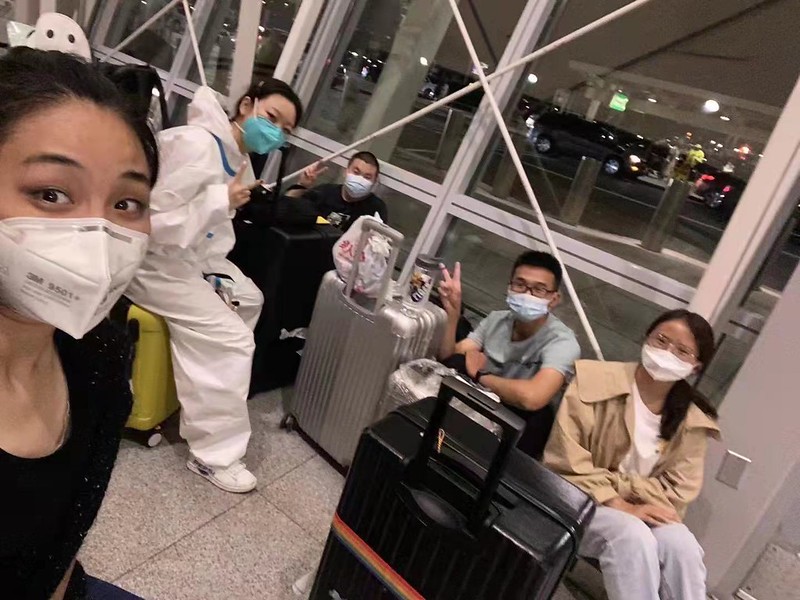 A group of Chinese students take a break at Addis Ababa Bole International Airport in Ethiopia. It was one of the stopovers during their 40-hour flight to the U.S. Photo by Yuting Wu

Chinese international students have to fly for 40-hours across three countries with over 10 required documents in their hands, just to have the opportunity to study in the United States.

Returning to school and attending in-person classes is difficult enough, and they say China’s Five-One policy, which limits  airlines to one international flight a week has turned it into a nightmare. And these restrictions could last until 2022.

“I bought my ticket five months before my departure,” Jiaqi Shan, a first-year graduate student at New York University said. “It’s a 40-hour transit flight and it cost me over $2,000. Normally before the pandemic, it only cost about $700 for a round trip between China and the U.S. The price just went crazy since March last year.”

According to Shan, the costs of a single flight ranges from $2,000 up to over $5,000, and one of her friends’ tickets were even canceled twice. As the Delta variant continues to spread in the U.S. and causes a significant increase in new cases, Chinese parents worry about their children studying here.

“She will go to multiple places and meet so many people every day, I’m afraid she’ll get infected,” said Hongmei Peng, whose daughter just came to America to study. “Although she said that she will do all possible protections against covid and take care of herself, there’s still the possibility of being infected. Increased hate crimes and violence rates also worry me a lot.”

Peng said that although she  struggled to sleep the first few weeks after her daughter left, she didn’t let her daughter know how she was feeling.

“I don’t want to distract my daughter or cause her panic,” she said. “She’s already busy with studying and living alone abroad and I believe that she can take good care of herself.”

In April, President  Joe Biden signed a proclamation suspending the entry to the United States of certain nonimmigrant travelers and China carried out the “Five One” policy restricting international flights to and from China. Both acts were aimed to limit the risk of transmitting coronavirus across borders.

Shan said that she understands the restrictions but they make travel very difficult for international students.

“I’m worried about the pandemic as well. But I still decided to come to America to continue my study,” Shan said. “I think face-to-face interactions and discussions, on-site practices and experience, library resources on campus, and other available resources and opportunities are important and integral parts to my college life.”

Miko Liu, a Chinese student who just graduated from the University of Washington this summer, is preparing for her upcoming GRE test this week and applications for graduate programs in biology and bioengineering. She said she was really torn between going to graduate school in the  U.S. or Singapore and Japan to study biology.

“These countries are also really advanced and professional in biology and bioengineering,” Liu said.“More importantly, these countries have better control in COVID-19 and are much safer I think.”

But after careful consideration, she chose the U.S.

“America still owns the most advanced technology and the most opportunities to get in touch with the most talented and professional seniors and peers,” she said. “I will also be able to hear the most diversified voices in this country with the most variety in students race and ethnicity. As long as I remember to wear a mask in public places and monitor my health every day, the pandemic won’t bother me much I believe.”